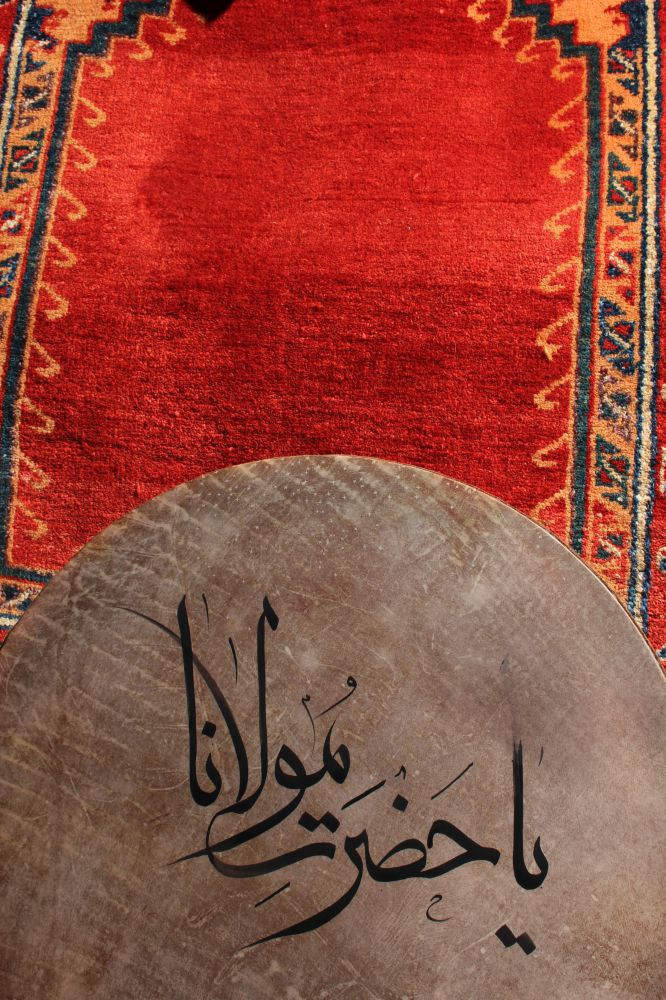 The main attraction for those visiting Konya is definitely the green domed Tomb of Rumi. Numerous people visit Rumi’s tomb, but only a small minority take the time to visit a much smaller and more modest tomb next to Rumi’s. These few people pay their dues and give respect to Rumi’s companion and friend, Shams Tebrizi. Those aware of the life and teachings of Rumi know well the importance of Shams and his effect on Rumi. One cannot be mentioned without the other. They were soul mates, with one complementing the other.
Those who follow the teachings of Rumi come to discover Shams. However, Rumi comes to mind when we read the Masnavi-Mathnavi (Mesnevi), the Divan-ı Kebir (Great Ledger), or the book of Fih-i Mafih (What is in it is in it). Shams Tebrizi naturally comes to mind when we hear of Rumi, because Shams made Rumi who he was. The recent interest toward Rumi in North America is due to Shams, because he encouraged and motivated Rumi to write the Aşk-ı İlahi (“Holy Love”) and teach Sufi wisdom through this medium. Rumi’s teachings have now gained international renown and are on bestseller lists around the world.
According to Anne Marie Schimmel, Shams Tebrizi was the one and only savant that made Rumi what he became. He was a mystical and romantic poet. However, Cemalnur Sargut states that Rumi was not a poet, nor was Shams a dervish. Both of them were beyond the obvious. They were both more than how they were perceived or known, yet we don’t realize it today.
The Japanese researcher Masataka Takeshita thinks everyone believed Shams was an ignorant travelling dervish who converted the intellectual and academic Rumi into an entranced poet. But contrarily to popular belief and the opinions of most Sufi specialists, Shams was not an ignorant dervish but a holy sage who was able to turn the savant Rumi into a man of love with his charm.
The translator of Shams’ book, the Makalat, was Mehmed Nuri Gençosman. He says in reality Shams was a man of letters and an erudite with sharp ideas and principles. He also had a different approach to teaching. The Iranian Nasır Shams adds his opinion that Shams was no ordinary man. He was different other people, and he had an unbelievable impact on ignorant, inconsiderate, and insensitive people. The academics of his time considered him an extraordinary man of God who was able to influence anyone he wanted to.

A Great Observer from Childhood

His exceptional qualities and observational skills, as well as his literary work of art The Malakat, could have faded under Rumi’s shadow and never reached the same peak of popularity, but Shams’ name lived on to today thanks to his exceptional observational skills that started in childhood.
Dr. Semih Ceyhan says that Shams stayed away from school (the “medrese”) and preferred other circles where he could use his spiritual skills for his mortification rituals and do his sema. In his book, we can see how Shams has this drive to observe the heavenly angels, the spirits of the dead, and the living on earth. It is said his sixth sense was so shrewd that Şeyhi Ebubekir Sellaf forbid him from sharing his observations and instincts with anyone else. As Cemalnur Sargut states, Shams was like a ducks egg under a chicken: A small gold mine. He had the capacity to learn and explore, make sense from nothingness, and explore the unknown with ease. Later he would acknowledge an enlightenment and knowledge that cannot be acquired from any school in the world. It was knowledge that not even Nuh Peygamber (the prophet Nuh) could acquire in his entire life.

The Enlightened Side of Religion

Also known as the sun of religion, Shams was born in Tebriz, Iran in 1185 and given the name of Mewlana Muhammed. The sheikhs and savants of Sufism called their excursionist pupil the “flying Shams” and “Kamil-i Tebriz” since he travelled around seeking knowledge. Even after reaching maturity and acquiring the ultimate wisdom, he says he couldn’t get enough of what the world had to offer, so he continued travelling the world in search of enlightenment. He was sure this was his reason for coming to this world. He continued travelling until he found Rumi and projected his knowledge, wisdom, skills, and holy love onto him. This exchange of knowledge continued for three years as Rumi became enlightened by Shams’ teachings enough that he could continue alone. Rumi, having transformed from one of the period’s most respected academics into a man of love and wisdom, was regarded oddly because he had changed so much due to Shams’ teachings. He was under a lot of pressure from the gossips and lies people created. Shams was blamed for Rumi’s sudden change and negatively affected by these rumors. Soon after he vanished, possibly either killed or exiled to India. Shams has a tomb in Konya, Niğde, Tebriz, and Multan in Pakistan. Even his death is a myth.

The Unification of the Two Seas

In 1244, the city of Konya witnessed a very chaotic time of political unrest. While Konya was so unstable, it welcomed a time of change that is still in effect to this day.
November 29, 1244 saw a milestone in the history of Sufism: The unification of the seas event, as stated in the Holy Book (Ku’ran-ı Kerim), in Konya. One was a man of love and letters (Shams), and the other was an enlightened academic and erudite, Rumi. They met at this time in Konya. The meeting of these two great characters brought about a change in the meaning and perception of Sufism as a whole, and it is regarded as one of the most unusual friendships of all time.
Rumi, a very popular academic and savant, was riding on horseback through Konya, the capital of culture and science at the time. An odd-looking stranger cut across his way and asked Rumi a question that would change his life: “Is the Prophet Mohammed greater than Bayazid-ı Bistami?” Rumi bacame furious at this arrogant question and answered, “Of course our Prophet is greater. Who is Bayazıd-ı Bistami compared to him?” The stranger then asked another question: “Then having reached his peak in life, why did our Prophet say, ‘Dear God (Allah), I couldn’t acknowledge your greatness to the fullest,’ whereas Bistami said, ‘My glory is the greatest’?”
The person asking this question was none other than Shams Tebrizi, the most extraordinary character in the history of Sufism. Upon this unexpected question, Shams enters Rumi’s life. Rumi was unaware of the changes that would be brought to his life by Shams, who would later reconstruct and redefine Rumi’s life and vision completely.
Rumi was shocked by this question and searched his knowledge for an answer. He said, “Mohammed was a person aware of God’s greatness and humble enough to acknowledge we exist because Allah wants us to live. He was fully aware of Allah’s creative and destructive power. Mohammed absorbed everything and learned from it, but he never denied Allah’s power or existence, whereas Bistami lost himself in his arrogance and self-adoration. He forgot he was only a servant beneath God’s might. That is what makes Mohammed superior.”

The Meeting that Made Rumi who he was

At this stage of his life, meeting Rumi was a dream come true for Shams, because he hadn’t before found someone that could understand his knowledge. Rumi and Shams became immediately inseparable, and Rumi began his transformation.
This is how their adventure, in the name of love, to reach God began. They became an inseparable couple who radically changed the history of Sufism. They threw all of Rumi’s books and academic readings into the river and started anew with Shams and his teachings.
Already equipped with the necessary intellectual knowledge, Rumi—with the support, guidance, and knowledge of his friend Shams—became an extraordinary savant. It is this meeting that made Rumi the intellectual erudite and sage he was.
Influenced by Shams’ love and guidance, Rumi taught and influenced people with his new findings for decades. We could say Rumi himself was actually the creation of Shams. While Rumi became famous for his literary works, Shams, the cofounder of it all, preferred to stay humble and low key.
When they first met, Shams was 60 and Rumi was 38. Rumi’s son Veled said that during Rumi’s three years with Shams, Rumi reached a new level in life regarding his love of God, and this erased his past and existing knowledge completely. Shams was already devoted to God, and this transformed Rumi into a higher, better person.
This level of being was attainable only for a select few and kept a secret. With Shams’ friendship and guidance, Rumi attained a level of being so high that no one else could match it. He had gained the ultimate love of God.
Shams gave the impression that he wanted humanity to learn by teaching Rumi his wisdom and presenting him as a role model. He reflected his own image onto Rumi, which also showed how much he loved himself. He would say, “love is thy; it is thee.”

Shams was the Force behind it All

Shams endeavored to show Rumi how narrow minded the schools and the Islamic theology teachers were. He expressed how an apprehensive version of Sufism under the influence of such strict ideologies would never benefit or satisfy him. Sultan Veled, Rumi’s son, expressed what a great transformation his father went through with Shams. Rumi—once considered a great academic, savant, and sheikh—had now become a humble student on the road of love. Veled said, “They seemed to be two, but in reality they were united in one body and soul, just as the waves of a sea can belong to only one sea.”
According to the Sufi people, a fully matured person is one that has cleansed himself or herself from all the bad things in life. This person acts as a mirror to reflect his or her inner beauty to others. This is why holy people are considered to be clean mirrors. Rumi saw the holy greatness, inner beauty, and purity in Shams. He reached his highest and ultimate holy existence with him and through him.
Shams became the match that lit Rumi, but he then vanished like the fire that goes out at the end of the match. He guided Rumi into the light and then faded away, but Rumi continued to illuminate his surroundings.
“We are separated physically, but we are inseparable spiritually. I am he, and he is I,” said Shams after having to leave his beloved friend in 1247 because of baseless rumors about their relationship. Shams was to recite his ideas to humanity through Rumi. Rumi became the words, sentences, and voice of Shams’ inner soul. Since childhood, Shams kept himself silent and didn’t speak a word until he met Rumi, the person who would translate his inner world to the rest of the world.
Now, Shams still tells his stories to humanity through Rumi. He stated, “Now being speechless, but full of words and meanings, Shams became the language for Rumi, the translator of his secrets.” One of Shams’ mentors had already given him good news: “Allah will give you such a friend to converse with; he will give voice to the realities on your behalf.”
Rumi experienced the divine love that made him so universal, as well as the divine names in the mirror that Shams reflected back at him. With the help of this divine meeting, the barriers of Rumi’s eternal being collapsed and the realities, which reached the mirror of his heart, were reflected to all humanity—all languages, religions, and races—and rose to a universal dimension.

Hey, Mom! Could God be a Woman?