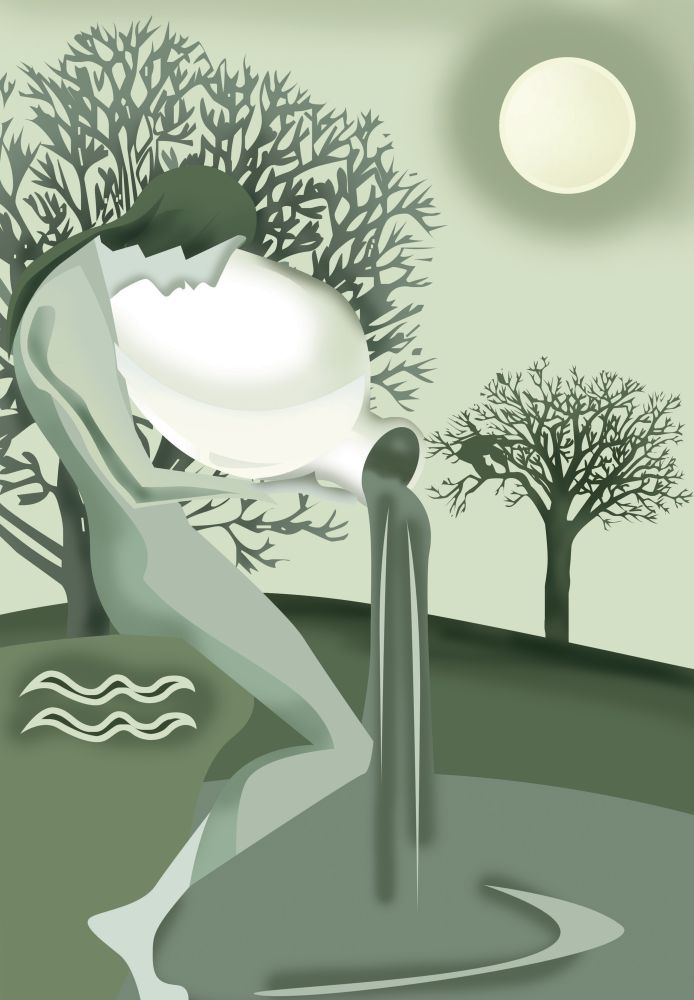 Aquarians work for humanity in their own way. They reflect their creative and original minds in all their works and achieve extraordinary things. They are innovative and hard to understand. Born between January 20 and February 19, the people of Aquarius are real trend setters.

“If I were two-faced, would I be wearing this one?” is a quote from the legendary US president Abraham Lincoln, who was an Aquarian. He freed the black slaves of the United States, and his quote reflects the humor, intelligence, and originality of Aquarius.

Aquarians may be cold comedians, but they are also highly intelligent. Their scornfulness is accompanied by a keen intellect and originality.

This is just how the water bearer of the Zodiac is. Aquarius, the 11th sign, is distinctive, intelligent, original, explorative, individual, humanistic, humorous, innovative, distant, and visionary.  Aquarius is symbolized by a human figure, with it and Gemini being the only signs to have this. This symbolizes how Aquarians serve humanity through knowledge. They are idealistic humanists. Indeed, they work for humanity, and they are also willing to fight for great ideals.

Aquarius rules the 11th house of the Zodiac, opposite the 5th house ruled by Leo. The Aquarius-Leo axis completes both signs.  Leo claims, “I am the King” and feels superior to the others, whereas its opposite sign, Aquarius, says, “I am here for the whole of humanity” and performs its duty in an original and innovative style. Aquarians take places in large societies and social groups where they can display their own individual styles.

If Leo is the ego, Aquarius is the conscience. The idealistic Aquarians always hope to make the world a better place. They are always among friends and other crowds, but they also preserve their individualities and distances.  Because of their desire to make the world a better place, they are drawn to politics. Famous Aquarian politicians include Abraham Lincoln, Ronald Reagan, and Franklin D. Roosevelt. Aquarians feel responsible for all social events and actions. Some Aquarians use music to unite humanity, such as Bob Marley, who was both a symbol of protest and a magnificent musician. The genius musician Mozart was also an Aquarian, as was Milos Forman, who directed a movie about Mozart’s life and has won many awards.

Aquarians are always innovative, different, and original. Their ideas are provocative, and they are also trend setters.  Christian Dior, who brought changes to the design and fashion world, and Oprah Winfrey, the trend setter of television, are typical Aquarians. Shakira is also an extraordinary Aquarian.

Aquarius is ruled by Saturn in classical astrology, while in modern astrology, its ruler is Uranus, the planet of innovation, change, and scientific discovery. Aquarians reflect the qualities of both planets. Because of Saturn’s effect, they are distant and like order, while Uranus makes them original and progressive.

Although Aquarians are innovative, they are also prone to arrogance. They want the whole world to share their ideas, and if someone rejects them, they can burst into anger.

They are fond of their freedom, so even when they are generous and work for the welfare of humanity, they are always distant.

They are highly interested in all manner of development and technology, such as computers and technological advancements.
They are unpredictable yet objective, and they can appear cold. Because their element is Air, they have an intellectual outlook.

They are people of logic who enjoy scientific studies, and they are also interested in aviation.  Jules Verne, author of many scientific adventure stories, is an Aquarian, just like Lewis Caroll, author of the most original children books based on an extraordinary imaginary world.

Many Aquarians become scientists, such as Charles Darwin and Galileo Galilei, and some of them use their innovative techniques in sports, such as Diego Maradona and Georghe Hagi.

Aquarians like crowds, and they like to see many people around them while also preserving their individuality.

They are independent, friendly, and flirtatious, but they are not good with real intimacy. They are never jealous, regarding jealousy as a threat to their freedom.

They can be shy, sensitive, soft, patient, and enthusiastic, but they may also like to show off. They are strong willed, and sometimes they can be insistent and compelling. They do not hesitate to discuss any matter they believe in.

They are generally unprejudiced and objective, and because they are so logical and objective, they may sometimes be accused of being cold. They do not make emotional decisions, and they never give up, even when they are disappointed. They are always beyond the standard trend with their talent for imagination and innovation.

Because they are also interested in aesthetic and artistic values, they also reflect themselves in music, arts, drama, and science. They are capable of living on their own and afraid of real intimacy. They always work contrary to the standard protocols. When they are angry, they can either prefer deep silence or they can burst into anger.

Aquarians are often the leaders in group activities. They make good researchers, scientists, astronomers, astrologers, historians, and photographers, and they are also good at working with computers and electronics. They like aviation sports. They may be talented poets and actors, because they use their mimics in a good way.

They tend to suppress their anger when they take offence and draw themselves into their inner worlds. If they can deal with extreme sensitivity, they can reach good positions in life with the help of their willpower. Aquarians sometimes suffer from stomach and eye diseases.

During the time of year for the water bearer Aquarius, heavy rains fall, and some cultures perceive this period as the beginning of a new year.

Solar Activities and Us – Part One