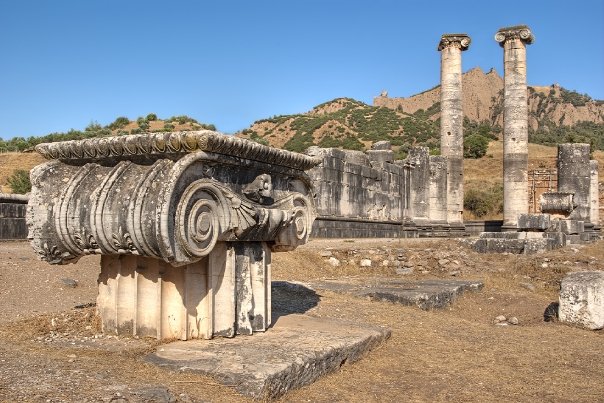 I was dressed in my body in the dignified lands of the Mother, where the light rises with the Sun and hearts are filled with every type of love. I associate Anatolia sometimes with Shahmaran’s story, which is about a wise woman who has the features of a woman above the waist and those of a serpent below the waist. It filled me with grief when I listened to this story as a child. At other times, Anatolia is the scent of orange flowers, which take my breath away during the warm spring mornings. This smell reminds me of a question that occupied my mind during childhood: Who lived here before we came? Were they naughty like us? Did they pick oranges in the nearby garden? Were they also afraid of Shahmaran? As I grew up, I learned that Shahmaran was a mythical figure who could not harm me, but she was always with me, together with the soul of the Anatolian land.

The Names of the Goddess

The Mother Goddess concept, which emphasizes the fertility and productivity of women, was born first in Anatolia. This concept later spread to Greece and across Europe. The first Mother Goddess of Anatolia is Kybele. This great goddess has different names in different regions and cultures. In Phrygia, she is called Kyble, Semele, and Kubele, and in Lykia, she is named Kibele, Kubele, Dinda, and Leto. In Hittite sources, we see the names Arinna, Hepat, and Kubaba and in Ephesus, she is called Artemis.

The Mother Goddess also has different names within Anatolia. She was Ishtar and İausga in Babel; Marianna, and Inanna in Sumeria; Nut, Hathor, and Isis in Egypt; Lat, Atargatis, Palestene, Astarte, and Diktinna in Syria; Rhea, Artemis, Ops, Ge, Mata, Urania, Urunome, Ida, and Maia in Crete; Venus, Vesta, and Anna in Italy; and Hubbel in Arabia.

During the excavations in Catalhoyuk and Hacilar, many terracotta statuettes were found that symbolized the Mother Goddess. The Mother Goddess is shown as a woman with a large belly and sizeable breasts. This big tummy symbolizes the Goddess’s constant readiness to give birth.

Once upon a time, the sky, earth, and sea was a whole. Suddenly, there came a mysterious melody, and the sky, earth and sea were torn apart. This melody was the celebration of Kybele, who was symbolized by the Moon. The Goddess was the master of the entire universe, but she was alone. She folded her hands, and a snake, named Ophion, slid from her palms. The Goddess united with the snake and with the power of strong love. The ground began to shake, the rivers streamed, and many reptiles appeared on the ground. The Goddess was ashamed, so she killed the snake and sent its soul to the underworld. Kybele also condemned part of herself, named Hekate, to the underworld out of fairness. Shepherds then came out of the ground from the teeth of the snake.

According to another myth about Kybele, the god of Sangarios river had a daughter named Nana. She became pregnant from the white flowers of an almond tree that came from Kybele’s blood. She gave birth to Attis. Kybele was in love with Attis, but Attis forgot his promise and tried to marry a mortal girl, but Kybele went to the wedding ceremony. On seeing Kybele, Attis went crazy and cut his own penis off. Plants grew from the ground where his blood had spilled. This symbolizes the Mother Goddess’s fertilization of the soil.

Each year, celebrations were held on behalf of Kybele in Pessinius around March 21, the day when Attis and Kybele met. The priests would dance to the sounds of drums and bells. Kybele priests used to demonstrate their psychic abilities using magical stones. The most well-known magic stone was the Kybele Blackstone, which was found in Pessinus. Gaius Cornelius Tacitus, a historian, wrote that such conic black stones were found in various regions of Anatolia.

The Tears of Niobe

During a childhood trip to Manisa, I saw a stony mass resting on the lower slopes of a mountain. It looked like a women leaning her head, and a local woman told me it was called “the crying woman.” I asked her why she was crying, but the woman walked away. Yes, I really felt sorry for the crying woman. Why was she crying? Why had she turned into stone?

Many years later, I learned the sad story of poor Niobe…

Niobe—a daughter of Tantalos, the King of Lydia—was proud of having 12 beautiful sons and daughters. She felt she was superior to Leto, who only had two children. She shouted,

I am happy, I am lucky, and I will be happy forever. I have many children, and death will not take them away from me. I will never be without any of them, so I have the power. This generation of mine will live forever! Leto thinks she has done a good job, but she has only two children. Two children? Is it enough?

Leto, the mother of the god Apollo and goddess Artemis, heard Niobe and became very angry with her. She called her children and asked them to inflict their revenge on Niobe. Apollo, the Sun god, killed Niobe’s six sons with his arrows while they hunted by Mount Kitharion. On hearing the news, Niobe’s six daughters ran to the mountain. As night fell, Artemis, the Moon goddess, arrived on the scene. Artemis shone in the sky and killed the six sisters with her arrows. No one could take the dead bodies to Niobe for nine days. No one could prepare a funeral ceremony. Poor Niobe cried and screamed with sorrow. She cried so much that after a while, her voice and sobs could no longer be heard. She was struck dumb among the dead bodies of her children, and she turned into a stone. Her poor heart could not bear the pain, so she asked Zeus to turn her into a rock. She went to Mount Syplos, where the mountain’s cliffs hugged her. Interestingly, one side of that rock is humid and wet even on the hottest summer days. Perhaps these are the tears of Niobe. Maybe she still cries for her children…

Artemis is a symbolic Kybele. Before Helens, Carian and Lelegian, people used to live in Ephesus. Some researchers assert that these nations followed the cult of Goddess Leto. Other researchers claim the Kybele cult dominated. Helens combined these and named their goddess Artemis, who they perceived as the mother of the gods.

Artemis of Ephesus differs from the virgin Artemis of the Greeks. Artemis of the Greeks symbolizes the spring, the crescent moon, and a newly born young lady, whereas Artemis of Ephesus symbolizes fertility just like Kybele. The priests of Artemis of Ephesus had to sacrifice their virility. The bull was the sacred animal of Artemis because it was Kybele’s. The bull ploughs the breast of the Mother Goddess and inseminates her by throwing its seed into the furrows. That’s why the bull represents fertility and virility. In many places in Anatolia, the heads and horns of bulls can still be seen displayed. Artemis of Ephesus was also the goddess of birth. Because she had numerous nipples, she was named Plymostos (Artemis with many nipples), and she was the symbol of prosperity. Swedish researchers claim these nipples represented the bulls that had been sacrificed for the goddess.

The temple of this Goddess was destroyed in a vainglorious act of arson when Herostratus set fire to it. The people asked the priest, “Why did the Goddess not protect her temple?” His reply was very interesting: “The day when the temple was set aflame was the birthday of Alexander the Great, so Artemis, being the Goddess of birth, was at the palace helping Olympias give birth to Alexander. As she was not in Ephesus, she could not protect her temple.” Today, only ruined remnants of the temple basement still exist.

The effect and reputation of Artemis continued until the fourth and fifth centuries, when Christianity became the dominant religion. When Saint Paulus declared in his sermons that man-made statues could not be God, people strongly resisted him. They shouted, “Our Artemis is great!” Because of great pressure from the public, Paulus had to leave Ephesus. However, the people of Ephesus eventually transferred the characteristics of Artemis to the Virgin Mary and exalted her.

As you find out more about these lands, you see you are on a magical journey filled with mythology and history. Now, let’s have a look at a story about the spider girl Arakhne’s.

The goddess Athena was the protector of handcrafts, but especially materials embroidered and knitted by women. The beautiful Arakhne of Lydia was so talented at embroidery, even the Nymphs would come and see her. One day, the fairies asked her, “Did you learn this from Athena?” Arakhne answered, “Who can measure swords with me? Athena? Who is she? I am better than anyone else.” When Athena heard this, she disguised herself as an old woman. She presented herself to Arakhne and said, “You are very talented, my daughter. You could be better than anyone, but you cannot beat the power of a goddess.” However, Arakhne proudly replied, “I can beat her.” Athena then resumed her true form and competed with Arakhne. She wove a tapestry that showed the gods in majesty, while Arakhne depicted them on their amorous adventures. Athena became angry and tore Arakhne’s work to pieces. She then turned Arakhne into a spider, so she would spend eternity knitting webs. Arakhne also means spider in Greek. It is thought that the spidery Arakhne lived in Colophone, which is 25 miles from Izmir.

Every corner of Anatolia has its own stories. Let’s focus on the northeast of this ancient land now. This is the region where the legendary female warriors, the Amazons, lived…

The Amazons were a nation of female warriors. They were descendents of Ares, the God of War, and Harmonia, the goddess of harmony. They lived in Themiskyra on the river Thermodon in the Black Sea region of Anatolia. They would have sex with men only to become pregnant. When seeds were sown in the spring, they would invite young men from neighboring tribes to have sex with them. If the resulting baby was a girl, she would stay with the Amazons, but if it was a boy, they would give him to a neighboring tribe. They invaded many places in Anatolia and also helped Troy during the legendary Trojan War.

They established Smyrna and Ephesus and built the temple of Artemis in Ephesus before they reached the Greek boundaries. Reportedly, they were warrior priests of the Hittites and loyal to Kybele.

This land carries the magical spirit of our planet in the center of a fertile crescent moon. It has been the mother of many civilizations. Consider this poem by Ahmet Arif:

This Holy Mother, who protects the garden of the Sun, gave cradles to Noah and opened her caring arms to hug the whole of humanity without discriminating between languages, religions, and races.

If you open your heart, you can hear the stories of that old and wise Mother coming from ancient times. The Mother tells you this:

I am Anatolia, the land of the ones who call everyone. With my millions of children on my lap, I hug you with my arms.