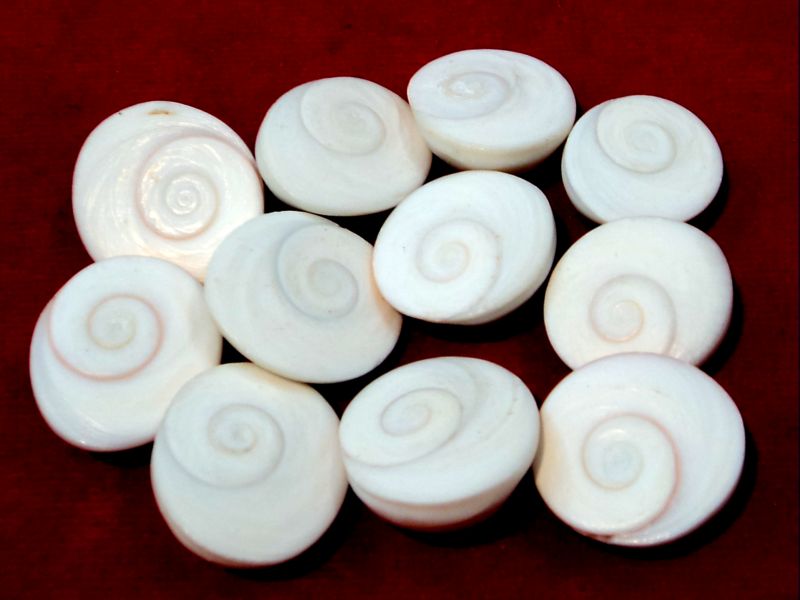 Years ago, I remember my mother-in-law and my aunt had these shell stones called Gomati Chakras. The first thing I noticed about them was how they looked more like the ancient fossils of snails rather than stones. These stones have two types. If the spiral texture on the flat surface is very convoluted, it is a female, whereas if it is less convoluted, it is a male. I could hardly believe it when I was told these stones could reproduce. As it happened, my aunt’s stones were infertile because their numbers haven’t increased so far. I know some of you probably think I’m lying, but I’m not. While my aunt’s stones haven’t reproduced, she insists that some stones do. Believe me, she is telling the truth.

After I learned this about the stones, I asked my aunt about what they eat and how they manage to live, and her answer was interesting. When not being used, the stones are kept in darkness inside a box with a piece of stone made from sacred soil, salt, flour, and sugar. I know this will sound weird, but the stones feed on this mixture. After this explanation, I started observing the stones more carefully. Because some stones looked much fatter than others did, I wondered if they grew bigger by eating the food of the others as well.

It’s not hard to find salt, flour, and sugar, but what if the sacred soil runs out? Asking myself this question, I learned that the sacred soil comes from sacred lands. These stones originated from the Gomati River in India. They were brought to “special” families in Anatolia through Mecca.

This is the background of these stones. It’s now time to explain their usage and purpose.

How to use Gomati Chakra

Gomati Chakra is mostly used to cure Erysipelas disease, which is also known as “St. Anthony’s Fire” in western cultures and “Small Snake illness” in Anatolia. The disease is an acute streptococcus bacterial infection of the upper dermis, and the usual medical treatment involves penicillin and warm compresses. Normally the disease abates after three to four days of treatment.
So, what about the treatment using Gomati Chakras? Well, the stones are fixed onto the sore parts of the body with the help of a special prayer. Remarkably, when the stones sense the sore area they stick to it, resisting gravity. The stones stay in place until either the soreness heals or the person who fixed the stones removes them with a special prayer. Gomati Chakra is used especially to relieve the pain of Small Snake illness, but it can also heal any pain or swelling in the body.

The ritual to fix the stones to the sore areas on the body is not easy, and not everyone can do it. A master should first authorize someone to do it. This authorization is generally passed down the generations of special families through a simple ceremony. During the ceremony, a special prayer is said first. The master healer then gives the new healer permission to heal others, and that is basically it. Men in these special families are privileged because they are automatically authorized without the need for a ceremony. My husband has this special privilege, but I have serious doubts about whether he could pass this permission onto me without bursting into laughter. Unfortunately, because I’m a bride of the family, I don’t have any direct permission for healing. I think I should stand up for my rights under the new family lawJ Oh well, never mind…

So, what about the treatment? During the treatment, the patient visits the healer for three consecutive days when hungry. The stones are then fixed to the sore areas by moistening the healer’s thumb with spittle, because many believe that spittle is an antivenom. By the end of the third day, after the stones have completed their task, a compress is applied to the sore area with boiled peppermint. Why peppermint? People call this disease “Small Snake” in Anatolia, and many believe that snakes dislike the smell of peppermint.

However, if you are skeptical about this cure, you can opt for the conventional medical treatment as well. Your doctor will prescribe some penicillin, and you’ll recover easily.

I wrote the above article eight years ago and published it in derKi.com. Later, I received an e-mail from someone who told me he was very impressed with my article. He had some stones that he would be happy to send to me if I was interested. After several e-mails between us, he shipped the stones to me. While choosing ten stones from them, I remember telling myself: “Weird! I’ve been chasing these stones for years and couldn’t find any. Now, out of the blue, someone sent me a handful of them.”

On the day the stones arrived, I was accompanying a very dear friend to her doctor’s appointment. I met her last year after she quit chemotherapy and visited me for subliminal therapy. She started recovering after we discovered the reason behind the illness in her esophagus and stomach. Six months later, when her doctors examined her, they found her blood markers were quite good for a cancer patient who hadn’t had chemotherapy for a while. In fact, there were no problems in her esophagus and stomach. The only trouble was her liver.

She was suffering from abdominal swelling, which limited her movement, and she became very depressed. We, as three of her friends, decided to take her to Burgazada for a two-day vacation to cheer her up. I remember how she struggled to walk up the hill toward the teacher’s lodge.

The same day, we organized an instant meditation session in the lodge room. During the session, we saw many images and visions, but one in particular was very interesting. There were stones stuck to my friend’s body in a specific pattern. We knew visions could bring out extraordinary results in this kind of exercise, but we were totally unprepared for what we saw as we opened our eyes. My friend’s abdominal swelling was gone: The edema had vanished completely. We were so happy that we almost cried. Bursting with joy, we all went out together and wandered around the island.

To be perfectly honest, those stones and their pattern didn’t return to my awareness until my friend started to suffer from abdominal swelling again a couple of weeks later. One day before her chemotherapy session, we were discussing how to stop the edema in her body when I suddenly made a connection in my mind between the edema and Gomati Chakras. Or maybe something else made me make this connection. Afterwards we decided to try the Gomati Chakras in her treatment, thinking there was nothing to lose.

I got goose bumps as I moved the stones in circles on her tummy and left them on the areas where they stuck. The pattern they formed was quite familiar. As I placed the rest of the stones, the pattern I had seen during our island journey reappeared. I was quite sure that strange things were going on. The shape was the reverse of an astrological sign. It was the symbol of Saturn, namely Kronos, the God of Time.

Normally the stones fall off a body after five hours and sometimes in as little as 10 minutes, so we expected the stones to fall off that evening…

When I rang her that night, she said one of the stones had fallen into the toilet, choosing to return to nature. Another stone had also fallen off, but the rest were still fixed to her body. I was very surprised to hear this, so we assumed the rest would fall off in bed while she slept. However, the stones were still on her body in the morning.

The stones stayed in place for 105 hours in total. The area where they stuck was where her cancer had started. It was as if Kronos and the reverse symbol of Saturn had paused her countdown during this period.

A few weeks later, we placed the stones on her body again, but this time they didn’t stay in the same area. Instead, they positioned themselves on the liver, the most recent location of her cancer. I had never seen the formed pattern before. I don’t think the universe has a system for refreshing images in one’s mind.

Such an Amazing Experience!

At present, my friend is already five months ahead of developing hepatitis as expected by her doctors. She still suffers from swelling, and the doctors continue to take fluid out of her abdomen. However, very interestingly, the results of the fluid have been very promising so far. The liquid is clear and odorless, and her blood markers seem to be normal, apart from fluctuations resulting from the fluid removal. Because of the fluid in her system, the health of her liver cannot be investigated by medical equipment yet. The doctors are wary, while we are spiritual and confident. We believe that the fluid will let us see everything in her body after the miracle is completed.

After this experience, I decided to observe the Gomati Chakras more closely. I asked to feel the power of the stones and experienced a 45-minute session where I learned how they work and how powerful they are. During the whole session, my body was very stiff and felt like it was burning. I couldn’t even wiggle a toe until the session ended. I had done similar healing exercises before, so I am quite familiar with these sessions, but this one was amazing.

Since then, I have received stones from all over. For example, children will suddenly bump into people I know while they are visiting somewhere, giving them stones. Occasionally people send me their stones as gifts. Also, the stones I kept inside a box reproduced seven new stones. We are becoming a bigger family every day…