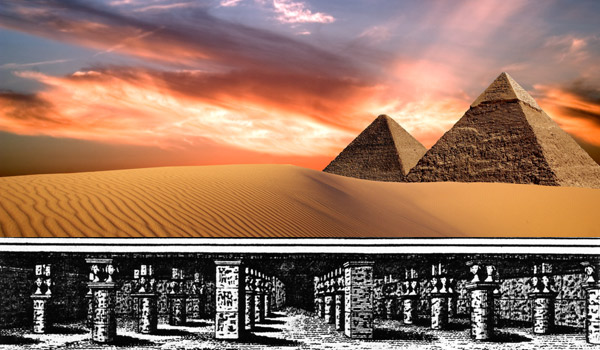 They (the 12 kings) resolved to join all together and leave a memorial of themselves; and having so resolved they caused to be made a Labyrinth, situated a little above the lake of Moiris and nearly opposite to that which is called the City of Crocodiles. This I saw myself, and I found it greater than words can say. For if one should put together and reckon up all the buildings and all the great works produced by the Hellenes, they would prove to be inferior in labour and expense to this Labyrinth, though it is true that both the temple at Ephesos and that at Samos are works worthy of note.

The pyramids also were greater than words can say, and each one of them is equal to many works of the Hellenes, great as they may be; but the Labyrinth surpasses even the pyramids. It has twelve courts covered in, with gates facing one another, six upon the North side and six upon the South, joining on one to another, and the same wall surrounds them all outside; and there are in it two kinds of chambers, the one kind below the ground and the other above upon these, three thousand in number, of each kind fifteen hundred.

The upper set of chambers we ourselves saw, going through them, and we tell of them having looked upon them with our own eyes; but the chambers underground we heard about only; for the Egyptians who had charge of them were not willing on any account to show them, saying that here were the sepulchres of the kings who had first built this Labyrinth and of the sacred crocodiles.

Over the whole of these is a ceiling made of stone like the walls; and the walls are covered with figures carved upon them, each court being surrounded with pillars of white stone fitted together most perfectly; and at the end of the Labyrinth, by the corner of it, there is a pyramid of forty fathoms, upon which large figures are carved, and to this there is a way made underground. But a cause for marvel even greater than this is afforded by the lake, which is called the lake of Moiris, along the side of which this Labyrinth is built…

—The History of Herodotus, Volume 1 by Herodotus

The Labyrinth so described by Herodotus has always been a legend in the eyes of historians. Some have even ridiculed Herodotus. They claimed he was inclined to exaggeration. Yet, Diodorus Siculus (first century B.C.), who lived in Sicily, also described the Labyrinth in words close to those of Herodotus. The Greek geographer Strabon, who visited Egypt in 25 B.C., had also seen the Labyrinth 423 years after Herodotus and he, too, had passed on a very similar description. Given all these, where did the Labyrinth dissappear to? Why had our present day archeologists given up the search for this legendary Labyrinth? Why was this legend only a footnote even to those interested in Egyptian history?

The Labyrinth of Karl Richard Lepsius

In 1842, King Wilhelm IV sent a research team to Egypt. Heading the team was the “Golden Child” of German Archeology, namely Karl Richard Lepsius. The team later arrived at the Faiyum Oasis located 120 km. to the west of Cairo. They had one goal: to find the Labyrinth. The Faiyum Oasis is a land rich in vegetation, and it is connected to the River Nile by the Bahr Wahbi canal. The old capital of the Valley was called the City of Crocodiles. It was Marrhos who had the Labyrinth built. In fact, Marrhos was the name Pharoah Amenemhat III used when on the throne.

The Pharoah had his own pyramid built in Hawara region of Faium. Hence, the thrilled archeologist Richard Lepsius speculated that the Labyrinth should also be there. And upon arrival he declared he had found the Labyrinth and sent a message which said he had set up his tents upon the ruins. In the days that followed he thought he was further proven right upon the discovery of ruins of columns made of granite and limestone. His further discoveries led him to believe he had found the location of the manmade Lake Moeris.

In 1899, the English archeologist Flinders Petrie visited the region. Petrie was to prove that what Lepsius had discovered was only the ruins of a Roman village. Petrie’s excavation led him to discover a stone plateau (340m by 244m). He intrepreted this plateau as the foundation of the Labyrinth. He concluded that the building itself was completely demolished after being used as a stone quarry for hundreds of years.

The Labyrinth from then on took its place in history as a legendary work discovered in 1843 by Richard Lepsius and then lost forever.

For years to come the rusty signboard with the words “Labyrinth – Built: Amenemhat – Stone Construction – 3000 rooms” would remind the passerby of the once Labyrinth.

For many years to come, except for the mystery researcher Daniken, nobody questioned the Labyrinth. A chapter in Daniken’s The Eyes of the Sphinx discusses the Labyrinth in detail and wonders how such a building could disappear in the mist of time. Daniken studies the findings of both Lepsius and Petrie and contends that the Labyrinth is yet to be discovered.

Louis De Cordier is a Belgian artist devoted to the preservation and investigation of Egyptian antiquities. He started a project called Mataha with a series of private lectures and further funded it with the sale profits of his invention of a time piece, the “Golden Sun Disc.”

The Mataha project aimed at finding the lost Labyrinth. Its starting point was to test Petrie’s theory that the Labyrinth was destroyed after being used as a stone quarry. He also believed the stone plateau not to be the floor but rather the ceiling of the Labyrinth. Researchers from both National Research Institute of Astronomy and Geophysics (NRIAG) in Helwan, Egypt and Ghent University were to take part in the project. For that reason, the Mataha Expedition was founded.

On February 18, 2008, the team started work in Hawara. In their work they employed archeological geophysics, a method by which information is gained non-destructively about features below ground. They could find what lies beneath to great depths without excavating. One other goal of the team was to find out if the salty underground water had caused any damage to any possible construction. The government was also in preparation of a project to drain the salty underground water.

However, the result was far from what had been expected.

The findings of the committee confirmed that there were archeological features to the south of the Hawara pyramid of Amenemhat III. The scannings showed vertical walls of an average thickness of several meters, which were connected to form quite a number of closed rooms. The scanned surfaces were at the Labyrinth area south of the pyramid. One area was 150m by 100m on the right side of the Bahr Wahbi and on the left side 80m by 100m.

Therefore, the team had proven the Labyrinth existed given the huge dimensions, but the total size and shape could not yet be concluded. The underground water and the presence of the canal had an effect on the consistency of the survey.

The researchers first encountered walls and structures 1.5m by 2.5m underground. There was nothing left other than walls and houses of mud bricks. This layer was believed to date back to Roman and Ptolemaic periods. Then, the Labyrinth region was used as a burial ground. It was during the Byzantium period that it had begun being used for housing. Under this layer, there rests the gigantic stone block Petrie had ascertained. The research scanned beneath the block and what they found further proved their theories. There were rooms underneath. What Petrie had called the basin was in fact the ceiling!

The Mataha Expedition had made one of history’s greatest discoveries without even excavating. There lay underground the legendary Labyrinth of Egypt.

Why Was This Discovery Never Heard Of?

Hereafter, the story gets a bit complicated. The results of the expedition were officially released by the NRIAG for the first time in August 2008, in a workshop in Cairo. The Mataha Expedition results were then published in the fall 2008 scientific journal of the NRIAG. And lastly, the expedition results were exchanged on the public lecture at Ghent University. Thereafter, Secretary General of the Supreme Council of Antiquities (Egypt) intervened. He asked for a stop to communicating the results owing to the Egyptian National Security sanctions. The researchers waited patiently for Dr. Hawass to make public the findings. When no such steps were taken, the members decided to set up a web page (http://www. Labyrinthofegypt.com) and post their findings.

What Is to Come?

The greatest danger facing the Labyrinth is the salty underground water. The water found 4-5m underground fills the Labyrinth and damages the wall coverings. The project to drain the waters should be implemented right away so that when the Labyrinth comes to light, the inscriptions could be read. Besides the greatness of the structure and its fascination, the hieroglyphs and the inscriptions are of great value to mankind from a historical point of view. And if the mentioned happens to be 3000 rooms of hieroglyphs, it is impossible to grasp the extent of knowledge that will be made available to researchers.

Following the Workshop, UNESCO publicly considered to mark the whole Hawara region as “world heritage” to start a safeguard campaign. But this is only the first step. What is urgently needed is an archeological salvation operation. Almost all the valuable sites with the exception of Tutankhamun’s tomb have been faced with illegal excavations and theft. Indeed, a structure of this size located underground, probably untouched, is beyond the dreams of any archeologist. It can leave one in between one’s ego and one’s feelings of service to mankind. It seems this is a greater threat to the Labyrinth than the underground waters.

I end with the wish that the required measures be taken as soon as possible, so that the Labyrinth once again may be brought to daylight and presented to humanity.