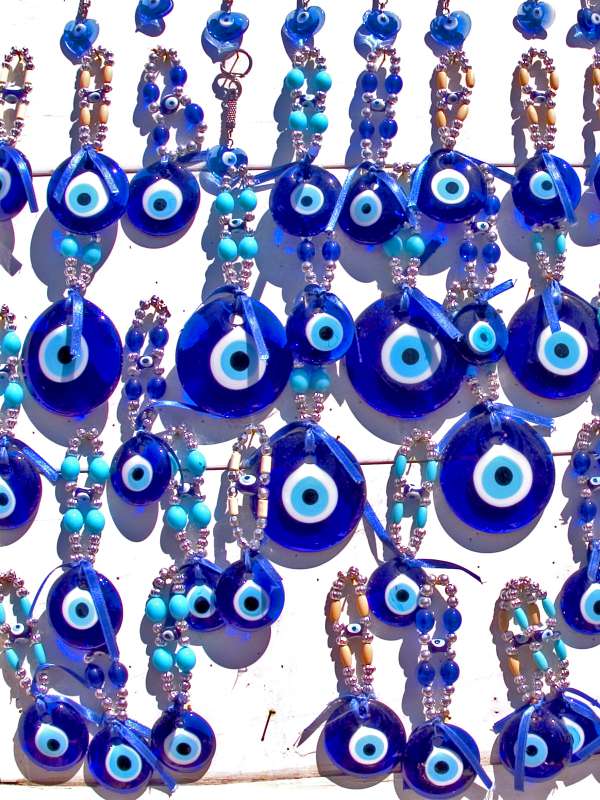 Beliefs about the potential power of glances reside all around the world and in nearly every culture. Stress and anxiety about eyes and glances act like heritage from humanity’s ancient ancestors. Scientists who examine animal behavior also show that if a big, wild animal fixes their eyes on you, you are in trouble. This animal behavior equals loading a gun and pointing it at you.

Beliefs about wicked glances and the evil eye are fairly common, but the most typical examples can be seen across the Middle East and Mediterranean regions. Due to the rich culture accumulated over thousands of years on our land, Turkish people intimately know similar beliefs.

Differing opinions debate what type of people possess this power of a glance. Some believe certain individuals have the power to affect any object on which they focus their eyes. Although these are mostly regarded as people with bad intentions, some are believed to be “good people” unintentionally harming others because of an intrinsic power. For example, in the Middle East and even in Turkey, people with blue eyes are rare and believed to possess this power; hence, they are treated with suspect. On the other hand, another opinion suggests that every person holds evil eye power, and it emerges when a person stares at something with great jealousy or interest.

It is believed that babies and newlyweds are the most vulnerable to the evil eye, and for this reason, they are believed to need extra protection. The evil eye is believed to have negative power on crops and animals as well.

The negative effect of the evil eye shows some disparities across cultures, but mostly demonstrates its effects in a physical way with nausea, headache or stomachache. Following these, it is believed to cause bad luck. When these effects occur, people who believe in the evil eye usually require help from friends, relatives or healers. The most common rituals for removing the negative energy from the body includes cleansing with salt or sea water, burning various herbs or incenses or to melt lead and pour it in cold water.

How to Avoid the Evil Eye?

According to ancient beliefs, the most common method to avoid the evil eye is to carry different talismans. A red bracelet worn on the left arm supposedly catches the evil eye because red—an active color—reflects the hostility back to the person who gave the glance. Blue evil eye beads, one of the most common talismans, probably act on the principle of “same poles repel each other.” Like we mentioned earlier, in the Middle East blue-eyed people are believed to possess the evil eye. While the color blue also represents protection, at the same time, blue is the color of the sky.

The color of a hamsas (wall plaque) talisman, commonly found among ancient cultures, is mostly blue as well. Furthermore, known in Turkey as “the hand of Mother Fatima,” this hand icon shows a clearly visible palm and five fingers with an eye in the middle. In some cultures, hamsas talismans hang near windows and doors along with blue evil eye beads for protection.

Other talismans viewed as effective against the evil eye include various bird feathers, pieces of stone and rocks, and sea shells with eye-shaped figures. These fetishes—shiny and attractive objects—serve to attract the attention of the evil eye. The whole potential of the evil eye reflects at first glance. Other jewelry with precious materials like gold, silver and turquoise are also used sometimes for the same purpose.

Anthropologists try to explain the evil eye concept in different cultures with the belief of “scarcity of good luck.” This opinion supports the assumption that if a person captures good luck and improves their life, the others encounter bad luck and poverty in the same ratio. Namely, the evil eye belief retains roots from social inequality and the imbalance of shared resources. For this reason the “lucky” minority in societies always approach the poor majority with suspicion.

Aside from a social evil eye and negative effects, another belief states that glances from good-intentioned people can have a “counter evil eye” effect. For instance, in a restaurant or café, you witness a customer being mean to a waiter. This waiter would return home with the effects similar to the evil eye, like a headache or nausea, due to the humiliation. However, the witnesses reduce the negative effect on the waiter by sending disapproving glances to the rude customer.

We could continue with more examples, but there’s an easier way. If we set all these aside and look at everything around us with good intentions and approach everyone with understanding, there will be no need for these talismans and no one will need to believe in the evil eye. Our most important accomplishment, however: We can still wear our blue beads!