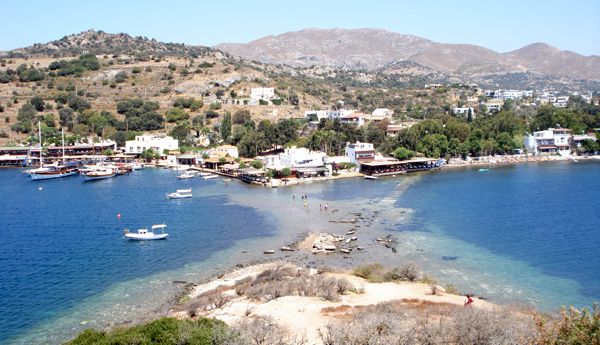 Gumusluk, ancient name Myndos, overlooks the world from the western corner of the Bodrum, Turkey peninsula. It pleases both tourists and visitors looking for spiritual enlightenment—the reason, a legend veiled in secrecy. Not a well-known legend, but you are about to peek inside and enter.

Although Bodrum has always been one of the most popular tourist spots, a completely different side shines through as well. At the end of September, Bodrum begins to show its other side and continues till May with abandoned streets and beaches left to the locals, residents who fled the big cities, fishermen and stray cats. Bodrum’s countryside assumes winter to be spring: The dried hills turn grey and yellow during summer and grow greener as winter returns. Fields bloom with daffodils; trees pop up with spring flowers, and Bodrum knows no winter. Only three seasons reign: spring, summer and fall, with a privileged few to witness those “cold” months. Even in those months, people don’t wear winter coats but prefer fishermen vests and boots. Bodrum residents make no use of wool gloves or ski boots.

Not merely Bodrum’s city center, but mountain villages and beach resorts fill her surroundings. Once told to us in an Aegean primary school, Bodrum is a “cockscomb-shaped peninsula” that leads to the Aegean Sea. On the western end of this cockscomb, there exists a very special fisherman’s village—Gumusluk—with only the open sea in front of it and Greece as its nearest neighbor and piece of land.

The most pleasant way to reach Gumusluk, located between Yalikavak and Turgutreis, is through Derekoy. You feel like you enter a whole different universe when you turn from the main road, and the brown sign introduces “Gumusluk/Myndos.” My ritual begins when I downshift, reduce the volume of the music, and open all the car windows to breathe in the Derekoy path. While you drive down the narrow asphalt road, you inhale the oven smoke rising from the village houses. You may also pull over to grab a tangerine from one of the trees hanging over the road; the owners do not care.

Continue on through Derekoy to pass “Le Kabbak” where lamps carved out of pumpkin are displayed. If you are lucky, you catch the local market day and keep on driving after stopping for some fruit. Next in front of you comes Peksimet village with windmills on the hilltops, and as you cross the ramp and turn “you will see the sea, do not be surprised”…The Gumusluk seaside welcomes you. If you pay attention on the left hand side, you will pass the sign for “Gumusluk Academy” founded by Latife Tekin and her friends.

A short ride further, you come to a crossroad and a weird feeling forces you to look to your right. Over there, you will see a sign for Karakaya Koyu—a mysterious and silent ramp appears before your eyes. Do not be shocked if a strange instinct forces you to steer to the right, especially if you are on a spiritual path in your life. Climb on, twist and turn…you are being attracted to the top for an inexplicable reason. There won’t be many vehicles coming down, maybe just a minibus with “Tel Dolap” written on it. A little further up, two signs offer you a choice in this mystical journey: upward Karakaya or downward Karakaya? If you choose the blue pill and move on, you will be welcomed by restored stone houses, narrow streets and a magnificent view at the Tel Dolap Restaurant. If that much of a journey satisfies you enough, wait for the night to fall while hanging out at Tel Dolap. You will enjoy a wonderful night with nice food and well-spoken hosts; it is even better with a full moon.

But, if you choose the red pill and tell yourself “to go up, up, up”… 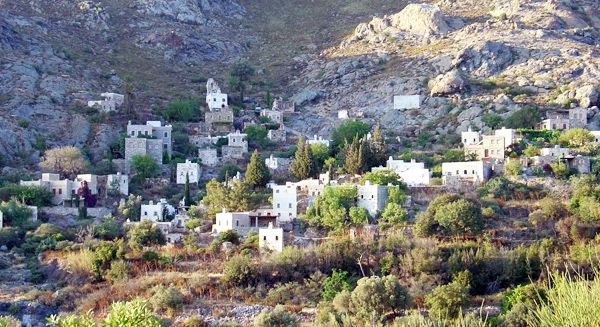 The Village That Leads to Parallel Universes

According to legend, there are only a handful of special places in the world. The wisdom of these places were obscured for the masses, and only the masters, people who spent time and travelled for years, were aware of them. This ancient and mystical knowledge was never fully exposed and only whispered in the ears of the few who reached a certain twist in their journey. A question remains about where we heard this mystery, but someone must have whispered that too. In this super age of knowledge, no satisfactory information exists about this place…neither in books nor on the internet connecting the whole world. But one day word travelled around, some roads blocked yet others cleared, and this knowledge found its way out through me. Now, passengers on the right turn of their journey may listen; the remaining, though, can only continue reading this like a travel article.

We mentioned that there are a few special places in the world. In these regions, gates lead to what some call other realms or parallel universes. These gates open up to places where exclusive knowledge resides only for those who travel back and forth from these parallel universes. These gates, called ley lines, are believed to be energy centers, in other words, chakras of the world. Ley lines also pass through the fertile Anatolian ground that has nurtured ancient wisdom and wise people; three gates reaching the parallel universes were believed to stand here as well.

We realized the names of all three gates began with “Ka,” and in most ancient cultures, “Ka” is linked with the life force. I won’t mention the other two for now. So, mystical, graceful, elevated Karakaya is one of these regions. We know these three places have special visitors, and also, these hidden gates have guides of their own. Guides take visitors that travel from faraway lands to the gates and wait for them to pass and return. Like a black hole, we are not exactly sure which universes these people visit through Ka doors and what type of answers they get.

I traveled a lot around Karakaya to bump into this gate. I have not reached a certain conclusion, yet. In the meantime, I will work on ley-line hunting. My conclusion is clear, Karakaya is a very powerful energy center; this energy may be the reason of the inexplicable spiritual joy of Gumusluk on people. Anyway, Karakaya is the village of ancient Gumusluk residents. This village was first inhabited by the Lelegs thousands of years ago, beneath the foot of a hidden mountain for protection. When the Republic was established, the threat of a sea attack diminished and a water shortage made the local people immigrate to the present village near the beach.

For a long time, Karakaya was only a ghost town with decrepit buildings; however today, while people buy and restore the buildings and get the privilege to live in this serene mountain village, reconstruction proves quite expensive. Now, due to current demand, the land has increased in value, but the transfer of construction materials to the village can be achieved only by camels, another factor to doubling the costs.

As you enjoy the beauties of Gumusluk, lift your head up and see the village looking down from the top, from some point in history, and maybe even from parallel universes. There is a Karakaya village far away…That’s our energy center village.

A Few Last Notes for an Enjoyable Visit

If you travel to Gumusluk, eat lunch at Maya’nın Mutfağı (Maya’s Kitchen).

Watch the sunset at Limon Café.

Listen to a classical music concert at Eklisia, if you can catch one.

Find a sea filled with antique relics along the coast on the western end!

From the western Bodrum peninsula: 25 km to city center, 60 km to Bodrum airport.

Famous for its blue-green sea, fish, antique relics and a peaceful atmosphere, go to the Bodrum-Mugla-Aegean Region.