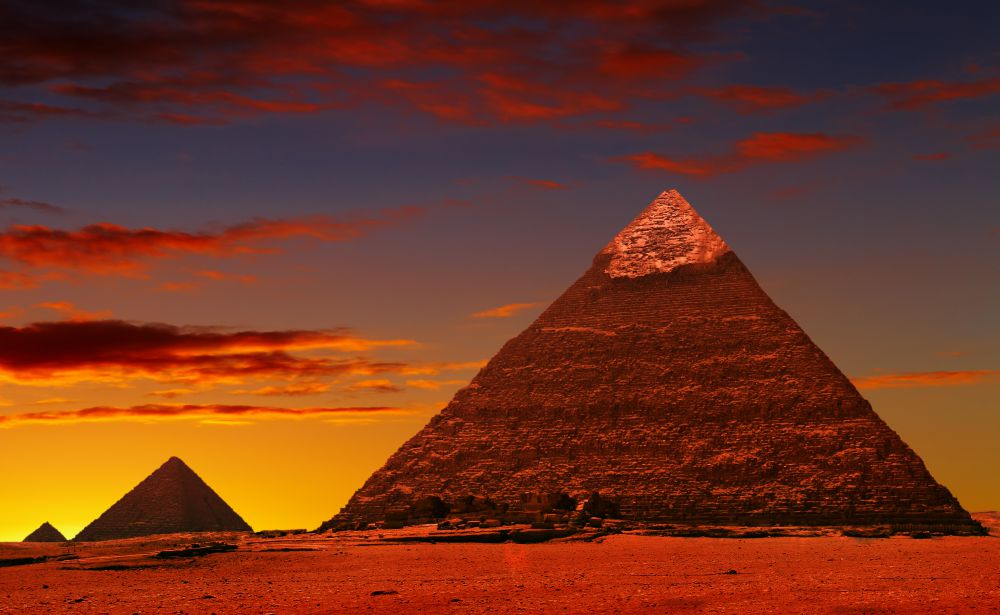 The first question that comes to the minds of most people who visit Egypt and the pyramids is the same: “How did those guys build all these things?”

According to the official records, the pyramid of Cheops was built as a tomb for Pharaoh Khufu, and the evidence of its construction usually supports this, but when you see some pyramids, most particularly those of Cheops and Khafre, for yourself, you notice they are somewhat different to the rest. Then they take you to the pyramid of Djoser, which passes as the first pyramid ever built, and tell you, “Imhotep built this one first, and after nearly 90 years, the Egyptians built the Great Pyramid.” However, when you compare them, the Great Pyramid makes that of Djoser seem like an earthen-brick house.

You don’t have to be an architect or engineer to see the difference. It just stands out like a sore thumb, yet the official records try to make us believe that the Egyptians advanced to the level of the Great Pyramid in only 90 years or so. It simply does not wash, dude! It’s especially evident once you step inside and see all those smooth walls, halls, and chambers. You then figure out that it’s impossible to construct such a thing by simply building a slope and placing the stones in a pyramid shape.

So, who actually built this place? Was it extraterrestrials? As I see it, it really is a human-made structure. It was made by men who are mentioned in myths, but the rest of humanity has not met them yet. Furthermore, seeing these two pyramids reminded me of something, the origin of which I don’t remember, but it doesn’t sound that far out at all: “The Pyramids of Cheops and Khafre were not built by the Egyptians. They found these two pyramids before them on migrating to those lands, and they built their own pyramids by imitating them…”

In the book 2012: Appointment with Marduk by Burak Eldem, there is an example about the study and exploration of a subject that quite impressed me at the time. Eldem gives an example that references a basketball game: “It’s important that one foot be fixed, and you should place that foot over science, but you leave the other one free so you can turn around and shoot for the basket.” This is a brilliant way of telling people not to limit themselves and remain open to any kind of opinion, event and occurrence while still keeping one foot firmly on the ground. I’m will try to do the same in a little while, but I fear there is no scientific explanation for what I’m about to share, so I won’t be offended if you find it hard to believe.

While “On the Trail of Hidden History” trip, we arrived at the Great Pyramid. Burak Eldem then told us about a stone tablet named Inventory Stela. This tablet was unearthed in 1857 by Auguste Mariette in the Temple of Isis near the Great Pyramid. It indicates that both the Great Pyramid and the Sphinx existed long before Pharaoh Khufu, and what’s more, the Sphinx is older than the pyramid itself. (Note: You can find a great deal of information about the stela on the Internet.)

Naturally, Egyptologists dispute the tablet as being completely bogus, but when you think about it, why wouldn’t they? Imagine yourself spending countless years in this field. A tablet then surfaces that says everything you considered true is actually wrong and that everything needs to be re-evaluated from the bottom up. Could you cope with this?

Over the Ley Lines

Now the fight’s about to begin. Before we ask who built the Great Pyramid and how, let’s talk about the purpose of the structure.

Even if we no longer remember them, there are certain alignments known as ley lines on the planet’s surface. Spiritual energy interacts with the planet along these lines, which could be considered the spiritual meridians of the Earth. In some way, the planet’s being is spiritually energized. As those familiar with acupuncture will know, needles are inserted into specific spots on the body. Every one of these spots is connected with different areas of the body, and these areas, which are recognized by practitioners of Eastern medicine, are called the body meridians.

In fact, our world is a living organism just like our bodies (See Gaia Hypothesis, James Lovelock, 1979), and this organism has a bunch of spiritual meridians (ley lines) just like its inhabitants. Ancient civilizations built their towns and temples over ley lines, and the Great Pyramid is located on the ley line which crosses under Giza. This helps to regulate the energy balance of the planet, as do the other monuments scattered around the world, which remain a mystery to this day. These structures are in fact like acupuncture needles stuck into the body of the Earth. This is why you can easily sense the strange energy flux inside because of the intensity of the ambiance.

The Great Pyramid was also an initiation station. In other words, it was a ceremonial site where the ancient esoteric teachings about the existence of humanity were conveyed to select pupils. These pupils would be sanctified and enlightened with some kind of ceremony prior to their education.

Various sources claim that many well-known names in science and belief systems were initiated in this pyramid. So, a question then comes to mind: “If this is so, why is it’s still unproven and why isn’t there a respectable source about it?” There were sources actually, but people throughout history have burned libraries and destroyed historical records in an effort to consolidate their reigns. To that end, they tried to eliminate the ancient teachings as much as they could. Most information was destroyed, and the survivors concealed themselves. Their teachings then went underground and were taught only to select groups. So what lies behind those various secret esoteric societies that we stumble across now and then actually originate from this very situation.

The Science of Sonic Energy

We find a most eccentric method about the construction of the pyramids in an Arab myth that makes you think “why not?” According to this particular myth, gigantic stone blocks could become weightless by a mere tap from a priest. The feather-light stones could then be moved around in the air and easily placed on the proper spot. What’s maybe being represented here is the use of sonic energy for construction purposes, something still not within reach of our modern technology. Some Babylonian steles indicate that sound waves were long used for the purpose of levitation (Source: The History of Esoteric Doctrines, Cihangir Gener). I used to hear about this technology from a friend who knows some Eastern masters well, but it sounded quite improbable to me because I hadn’t seen such things with my own eyes yet.

Some sources indicate that humanity did in fact have these technologies during ancient times. This explains the construction process of monuments when you ask, “How did they manage all those massive stones?” Of course, for this technology to be scientifically recognized, there would first need to be a phase of rigorous research before an academic approval. That said, even if scientists did rediscover this application of sonic energy, it is still pretty questionable whether they would let the public know or not.

Now let’s get down to the question of who built the Great Pyramid and when. To conclude my article such that the meaning is completely yours to interpret, I will hand over to Cihangir Gener and his unusual yet intriguing explanation:

Arab philosopher İbni Batuta noted how the pyramids were built for the purpose of preserving knowledge of arts and sciences against the Flood. A Coptic papyrus appears to convey the following statement, “What is recorded on the walls of the pyramids are some very useful information and mysteries concerning science, astronomy, geometry, and physics.” The Coptic historian Mesudi claimed that the Pyramid of Cheops was built by King Surid 300 years before the Flood to preserve the ancient knowledge. However, the planks on which the ancient information was imprinted were destroyed in time and so the knowledge was lost…

The Greek historian Herodotus affirms the claims about the mysterious monuments, such as the initial pyramids and the sphinx being built before the Flood. The Egyptian priests informed Herodotus that these pyramids were built by the Hermes priests during the era of King Surid to convey the “secrets of mastery” to the later generations . They also told him that 341 generations had passed since. A rough calculation in line with the information given by the Egyptian priests reveals that the pyramids were built at least 12–13 thousand years ago.

Being a Healer is No Simple Thing

How Does Allopathic Medicine Ruins Your Yoga Practice