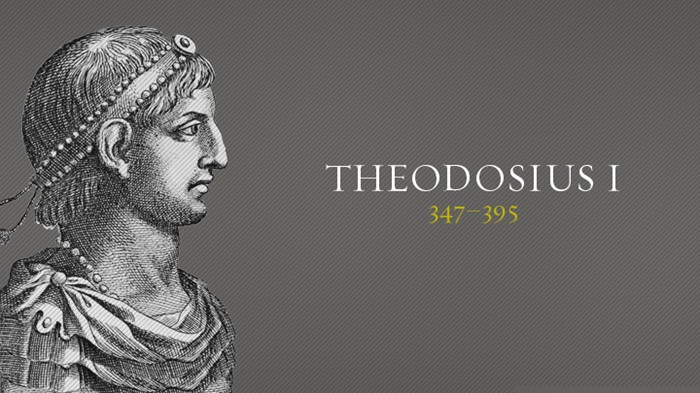 He declared Christianity the official state religion of the Roman Empire and issued edicts against pagans and their religions. Following his death, the Empire split in two. During his time, Constantinople made the great leap to capital of the eastern Roman Empire in a golden age until its dissolution.

In the early years of Theodosius’s reign, some pagans held important offices, and he didn’t inhibit their activities. He tried to cooperate with the Senate, which was mostly pagan, and installed one of them in the Empire’s highest position. Maybe these were merely political precautions, or maybe Theodosius still had some respect for non-Christians.

In the later years of his reign, however, his attitude toward pagans hardened. For example, The Battle of Frigidus was one of the bloodiest in the history of the Roman Empire. Theodosius won against his Western enemies, and this was considered the final victory of Christianity over the old Roman beliefs. Theodosius was a pious Christian. He rejected the title of Pontifex Maximus, the highest title from the old Roman religion. In 380, he declared Nicene Christianity as the state religion. In 391 and 392, he banned all pagan cults and activities.

Some details may help here: In his edict published on February 28, 380, Theodosius declared that everyone should follow the faith represented by the Roman bishops Damasus and Alexandrian Petrus. With the further three edicts in 391 and 392, he banned all pagan religions, even those practiced privately, and threatened severe punishment for any objectors. There was a tragicomic situation here, however. The historian Ammianus Marcellinus said during a visit to Rome in 380, “They reject the gods, but they don’t even go out to eat or have a bath without looking at the ephemeris.” On the other hand, the lack of a ban on Christian and pagan writings show this edict was not absolute. Theodosius was not known for being harsh, and he didn’t always apply the punishments from the edicts he declared.

On the other hand, in 391, many bloody conflicts took place between Christians and pagans. In this sense, 391 is a very special year for astrological history. Theodosius ordered the destruction of the Temple of Seraphis, although modern historians dispute that Theodosius ever gave an order for the temple’s destruction. This may be true, but I couldn’t reach a definitive answer for this, but it does not justify Theodosius. I also don’t accept the notion that he is exonerated because Christians did the research. Wikipedia states how the only thing that is known for sure is that the destruction was perform by local leaders who had been empowered by Theodosius. In whatever case, there is a case for him being the root cause. While those temples were being destroyed, there is also no evidence of Theodosius trying to prevent it. It is clear that Christianity destroyed the pagan traditions.

However, Theodosius may have had a crisis of conscience. Consider a man who has known many pagans in his life. These were teachers, mentors, and friends who he respected greatly, but he was also a devout Christian. Maybe this is why he initially hesitated. Of course, I’m just basing this opinion on what I read on Wikipedia. The pagan culture was facing horrible developments in multiple ways at that time and beginning to crumble. It was a time when the Antique Age of astrology was also coming to an end, but neither was over yet. The pagan culture survived for another 200 years, ending with the closure of the Temple of Zeus.

There were laws against astrology in the early years of the Roman Empire, but these were to prevent astrologers and charlatans from bothering the people. During these times, many emperors were themselves astrologers. During the fourth century, the discipline of astrology began being frowned upon. While Christianity slowly gained the upper hand, all the pagan disciplines, including astrology, faded away. Astrology was now seen as an error.

During this time, astrology was unable to adapt itself to the teachings of Christianity, so it could be considered a transitional period. However, this great, creative period of history, the age of the philosophers, was diminished by Christianity. When thinking about it this way, paganism did not disappear on its own but was rather bloodily suppressed by Christian Rome. For example, one of the most important sources of that period, Ammianus Marcellinus, described how cultured people who obtained forbidden books were followed and killed. These writings were burned publicly in great numbers. These books were accused of being magical texts, but Ammianus indicates these were actually studies into liberal arts, such as grammar, rhetoric, dialectic (and logic), arithmetic, geometry, music and astrology. Ammianus comments, “As a result, in the eastern regions, fearing that the same fate may find them, they burned down their libraries themselves.” The great libraries of Rome were closed and completely emptied. In 415, Orosius, a Christian mentor, tells how he saw the empty bookshelves of temples with his own eyes on a visit to Alexandria, confirming that they had been emptied by his own people (the Christians).

Finally, here are the actions of Theodosius, listed chronologically:

AD 380: In an edict on February 27, Christianity becomes the state religion of the Roman Empire. Non-Christians are defined as being “disgusting, heretical, stupid, and blind.” Ambrosius, the Bishop of Milan, starts to demolish all temples in his region. Nestorius, an interpreter of holy mysteries, comments that the dominion of spiritual darkness over humanity has begun.

AD 381: On May 2, an edict takes away all the rights of Christian people who converted back to their pagan religion. Throughout the eastern empire, temples and libraries are looted or burned down. On December21, Theodosius declares that even a simple visit to a Hellenic temple will be punished.

AD 384: In cooperation with the local bishop Maternus Cynegius, Theodosius gives the order for the destruction of all temples in Greece and Asia Minor. (While modern historians dispute that Theodosius gave the order for this destruction of the temples, he at least ordered them to be closed and not visited. While he may not have directly given the order, his other edicts must have surely encouraged other Christians.)

AD 385-388: Maternus Cynegius destroys hundreds of Hellenic temples, shrines, and mausoleums. Thousands of pagans are either detained or killed.

AD 386: On June 16, maintenance and repair of any closed pagan temples becomes forbidden.

AD 388: The public discussion of religious subjects also becomes punishable. The elder speaker Libanius writes a letter to Theodosius, pleading for him to protect the remaining Hellenic temples.

AD 389 -390:  Fanatical settlers arrive by sea and pour into the cities of the Middle East and Egypt, destroying statues, shrines, libraries, and temples and lynching pagans. The Patriarch of Alexandria, Theophilos, begins a campaign of terror against the pagans. The temple of Dynosos is converted into a Christian church, and its pagan clerics are humiliated before being stoned to death.

AD 391: In a new edict on February 24, it becomes forbidden to merely look at a pagan temple. The temple of Seraphis is looted and its famous library burned down.

AD 392: On November 8, Theodosius outlaws all non-Christian rituals, labelling them as “pagan superstition.” Almost all temples in Cyprus are destroyed, with thousands of pagans being slaughtered. The edict of Theodosius is clear: “Nobody who does not bow down to Father Epiphanius has the right to live on the island.” In many cities of the Middle East, pagan uprisings begin.

By the way, do we remember this culture of vandalism from anywhere else?

The Meditation of Life and Death