Home > Astrology > Capricorn: The Appeal of a Distant Peak
Astrology 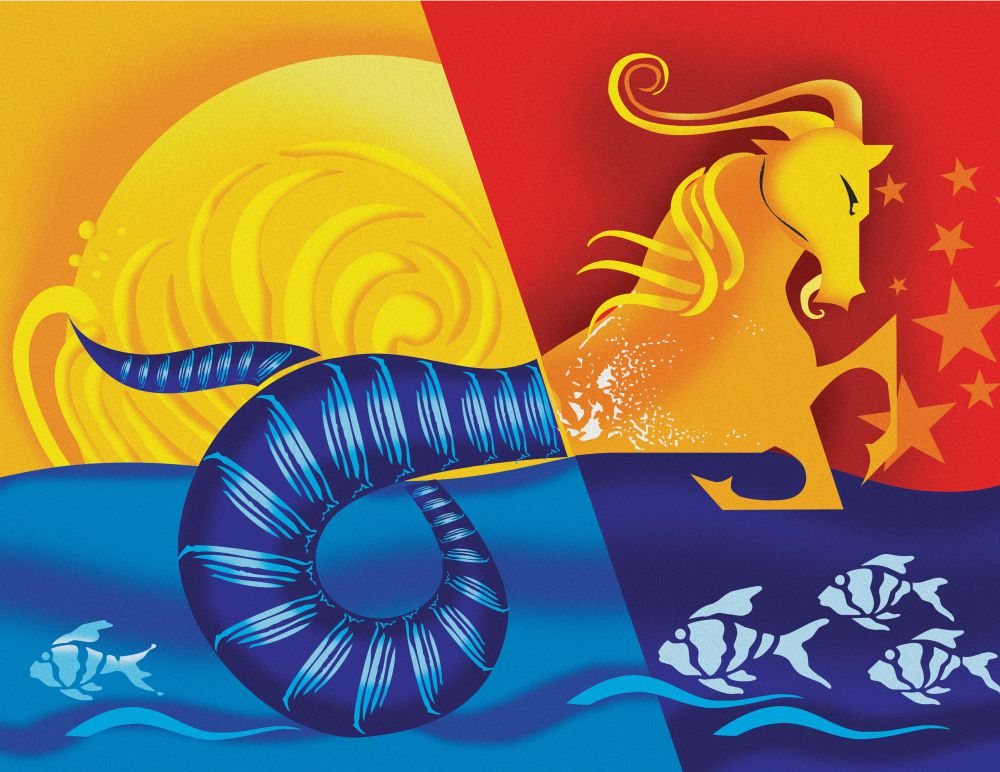 Capricorns, who are born between December 22 and January 20, are ruled by Saturn, the planet of discipline. These people climb the rough path of life, using all their ambition and discipline to reach the peak and attain success with certainty.

The famous boxer Mohammed Ali, a Capricorn, once said, “I always hated exercising, but I said to myself ‘don’t give up; maybe you’ll suffer now, but you’ll sit back as a champion for the rest of your life.’” This reflects the perspective of a typical Capricorn: They work, endure, and suffer. They climb the mountain and reach the peak. They stay there alone before taking a rest.

Capricorns often suffer from setbacks and suspense when trying to reach a certain status within society, but they are extremely patient and can endure long waits to see their enemies defeated. Capricorn is the ruler of the tenth house— the house of success, careers, and worldly ambitions—and is in turn ruled by Saturn, the planet of discipline, order, ambition, restriction, structure, and time. As a result, Capricorns know the value of time and money, and they are very prudent in spending these, although they do for their loved ones. They are aware that patience is measured in time, and anything that time and tenacity may bring to them can also be taken away. Their main criterion is success, because an unsuccessful Capricorn is like a lost ship. If they deviate from their routes, they may be swept away, although this is unlikely. They are methodical, disciplined, and stubborn. You may know the story of the two goats that met on a bridge. This represents Capricorns: They are so stubborn that they may sometimes get into trouble because of it. They do not trust in life. They may have fantasies, but they are realistic about life in general. They are cautious and discreet.

As one of the cardinal signs, Capricorns may be leaders, but they never stray from traditional methods because they always want to play it safe. They do not want to be cheated or defeated. On the other hand, life somehow teaches them that they will not be able to control everything and they will be beaten one day. They may then hand over the reins a little.

Capricorns are the businesspersons of the Zodiac. They sacrifice themselves to all the things they do. They are distant due to Saturn’s effects, but that cold and distant mood also makes them charming and mysterious. The coolest men ever are Capricorns, such as Humphrey Bogart, Orlando Bloom, Bradley Cooper, Mel Gibson, and Ralph Fiennes.

Because Capricorn rules the skeletal system, Capricorns have formidable bones. They do not age easily, which is a gift from Saturn, but they may appear older in youth because of their serious expressions.

Capricorns can be practical, ambitious, mean, and pessimistic, but they can be good comedians thanks to their inner pessimism. Jim Carey is a good example of this. They excel at professions related to money and mathematics. They can make successful economists, financiers, bankers, speculators, managers, and real estate brokers. They also make successful musicians, such as Marilyn Manson, David Bowie, Elvis Presley, and Joan Baez.

Capricorns are good when working with long-term planning. They enjoy discussion, and this can make them good politicians. They can use their hands adeptly, making them good engineers, farmers, and builders. On the other hand, they may enjoy success in the entertainment sector because of their intelligence and insolence.

They are rock solid, cautious, and skeptical. They may have few friends, but they can make tough enemies and be vengeful.

Capricorns generally work in managerial positions, and they have high standards for both themselves and others. They only show moderation toward their families, because they only show their lovely faces to their loved ones. They can even bend mountains because of their commitments and ambitions.

They really climb their mountains like goats, opening paths that lead to the peak. Capricorns may be interested in the occult and other mystical knowledge, but they do not fall into fantasies, although they may write about them. J.R.R. Tolkien, Edgar Allen Poe, Isaac Asimov (the father of sci-fi) , Stephenie Meyer (author of the Twilight series), and Carlos Castaneda (author of The Witch’s Dream) are all Capricorns who reflect the depth and pessimism of Capricorn in their works. Some Capricorns may also combine mystery, mathematics, and politics in the same pot, just like Umberto Eco, the author of Foucault’s Pendulum and The Name of The Rose.

They are demanding. Capricorns are not usually adored by their employees because they are so traditional, conservative, and sometimes lack humor. They may be prone to pessimism and can be melancholic.

They may suffer depression in extreme cases. Because they always try to suppress and control their feelings, they need to meditate regularly if they want to avoid this.

Capricorn rules the bones, teeth, joints, and skin, so Capricorns may have problems related to these. They are prone to dermatological diseases and allergies. They may also have digestive problems because they suppress their feelings. They can also be prone to anemia and rheumatic diseases.

Capricorns have a sharp intellect. They are deep, and they search for all the possibilities, looking for the most reliable alternatives. They have a sharp memory and a hunger for methodical knowledge. They concentrate well, and they like discussions where they can show how clever they are by entrapping their rivals and beating them with the help of their logic.

They are troubled in their personal relationships because they focus only on themselves. Capricorns are cautious toward foreigners. They do not like interfering with others, and they do not want anyone to interfere with them either. Sometimes, people they do not like can get close to them. They are diplomatic, tactical, and secretive in their ordinary relationships.