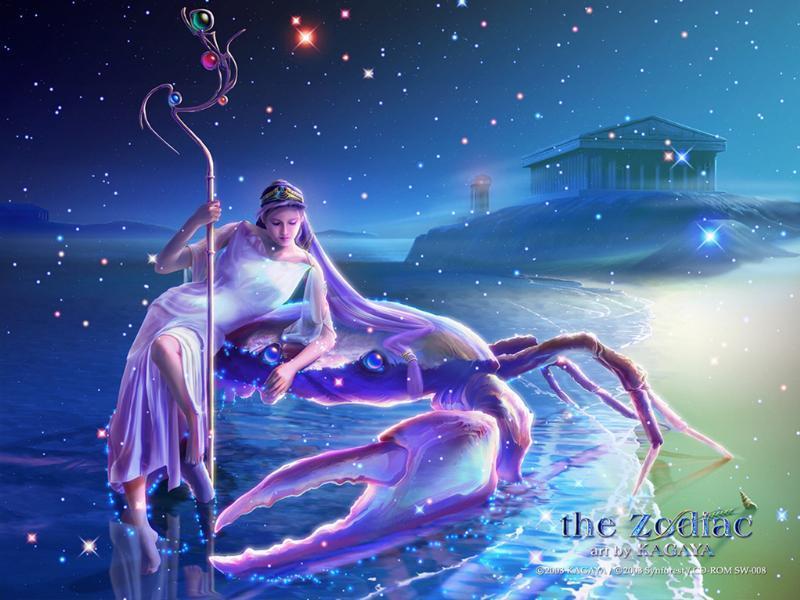 Many celebrities celebrated their birthdays recently. We learn much from these Cancerians: the sea, motherhood, loyalty, money, and remembrance. Here is the sign of the stars…

There’s a proverb about Cancer: “A Cancerian forgets, but she never forgets what she forgot.” The human memory is based on forgetting, but the opposite is true for Cancer. She never forgets, and her memory is her trademark. Cancerians are born with the capacity to store the good and the bad, the happiness and the sadness, the smells, the colors, the reflections, the signs, and much more forever and ever. They live in the past, and time never passes because the past remains in their minds with all its dimensions. Their memories are as colorful as the current moment. Marcel Proust, a memory master, was born under Cancer for example. Cancerians also make good photographers, because their memories transfix everything. Remembering forever, withholding, and being loyal are Cancer’s characteristics. Franz Kafka, who wrote love letters to Milena for years, is a good example of a Cancerian.

All Cancerians are tetrahedral by nature because Cancer is ruled by the mysterious, feminine, foggy, dark, and enchanting Moon. The Moon has phases—the new Moon, the first quarter, the full Moon, and the last quarter—and so does Cancer. The Moon rules the water and controls the tide. Cancerians are also like tidal waves: When they burst into laughter, they can suddenly become the saddest person in the world. Being a water sign, Cancer always carries these tidal waves. When you meet Cancerians in the morning during the full moon phase, you may think them to be magnificent and charming people, but they may become grumpy as they suddenly enter their last quarter phase because of some small thing you unwittingly did. They then withdraw into their shells, and you cannot break through that shell whatever you do. Dealing with Cancerians in their shells is as challenging as discovering the Higgs Boson.

They never forget anything, but they do not actively plan revenge like their Scorpio siblings. Instead, they just hide in their shells and wait. They wait there until the right time for vengeance arrives, and this time always comes, sooner or later. Incidentally, a Cancerian could kill you while just waiting there and doing nothing. Cancer is symbolized by different names in different cultures and mythologies. It is a water sign, and you may find its enchanting style on waterfronts. If you meet a Cancerian at night by the water while the Moon covers the sky, you may easily fall in love. Cancerians are so charming and creative. They are in love with water and the sea. Look at Ernest Hemingway—he wrote a wonderful novel on the sea. Cancerians have round faces, as round as the Moon. Some well-known Cancerians include Liv Tyler, Princess Diana, Müjde Ar, Reha Muhtar, Deniz Seki, Türkan Şoray, Sezen Aksu, Isabella Adjani, Frida Kahlo, Gustav Klimt, Tuba Büyüküstün, Ata Demirer, Levent Üzümcü, Harrison Ford, Aşkın Nur Yengi, Sylvester Stallone, Henry VIII, Hüsnü Şenlendirici, Natalie Wood, Nelson Mandela, and Jack White.

White and silver blue are the favorite colors of Cancer. Just as gold represents the Sun, silver represents the Moon and Cancer. Moonstone is their favorite gem. The breasts and stomach are ruled by Cancer, and Cancerians, as well as others influenced by Cancer, tend to have sensitive stomachs. The womb and the lower lobes of the lungs are also ruled by Cancer. Cancerian women are generally full-breasted, and you just want to cuddle up to them because you can find the tenderness of a mother there. They are mothers to all their beloved ones, and they protect, nourish, and nurture. Regardless of gender, all Cancerians are like mothers. Motherhood is a holy concept to them, even when they have no children themselves. Any bad intentions or attitudes toward the mother or children of any Cancerian should be avoided, because you will never be forgiven.

Cancerians can also act as mothers to the world. For instance, the Dalai Lama is like a mother to the world with his messages of love and tenderness. Cancerians are also patient and strong, such as Nelson Mandela, and they may bear difficulties for years by closing their shells and waiting for the right time to open them again. Another holy concept for Cancerians is their homes. A house is a home to Cancerians, their holy asylum where they hide from the evil outside. When you visit their homes, you feel at peace, and they always have something to eat. They like food because it gives them a feeling of security. They also enjoy wining and dining. They have trouble controlling their eating habits, and they need to try hard to stay slim. Because their emotions continuously change, their eating habits also fluctuate accordingly.

Cancerians never act directly—they always approach love, targets, and any situation crabwise. They push their targets slowly, encircling them before grasping them with their claws and never letting go. This is their style. They prepare a secure cocoon that no one can escape. If a Cancerian woman is separated from her lover, she never really leaves him. Even if she does leave physically, she never forgets. If you cheat on her, her curse will not stop following you. I do not advise leaving her, because you will never be happy with your new love. The Cancerian will suffer deeply, and this suffering will be dispersed through the cosmos and reflected back to you through the waters of the world. Leaving Cancerians is really difficult, and they may leave you if they want to, but this is also hard. Maybe this is why Daniel Day Lewis broke up with Isabella Adjani by fax.

On the other hand, Cancerians are so proud that if they are convinced they’re not being valued, they turn their  backs and move on. You will never see or hear about them again. When they say goodbye, it is a deadly farewell. You cannot return to the relationship, whatever you do. When Cancerians leave someone, they suffer deeply and close their claws, hiding themselves in a cave deep under the sea for a while. Healed by the water, they later decide to shine like the Moon again and start their journey of love once more. Next time, their love becomes even more enchanting. No one else can experience and express their love so intensely. The depth of Cancer’s love and its lunar influences are observable in many love songs. Cancerians also know the language of emotions, and they are skillful at speaking it. Cities like New York and Venice are cities of Cancer, because a Cancerian cannot be happy in a place without water.

Argentina and the USA are countries of Cancer. You can feel that Cancerian theme in Hollywood films, the family structures, the people’s deep love, and the great patriotism. There is loyalty and its prize, and there is food… Cancer is also the rising sign of Turkey. Turkey is well known for its hospitality, patriotism, traditionalism, delicious food, magnificent beaches, and charm—the characteristics of Cancer. This country displays an infinite femininity and motherhood with all her mercy. Cancerians may become good journalists, authors, politicians, photographers, cooks, and economists. Cancerians’ intuitions about money work well, and they know how to save money and how to multiply it. Because they love being secure, they keep love and money close at hand as their main securities. Cancerians are just like the moonlight, they are always mysterious, even when they dissolve.

All for One and One for All: The Trinity of Astronomy, Astrology, and Mythology