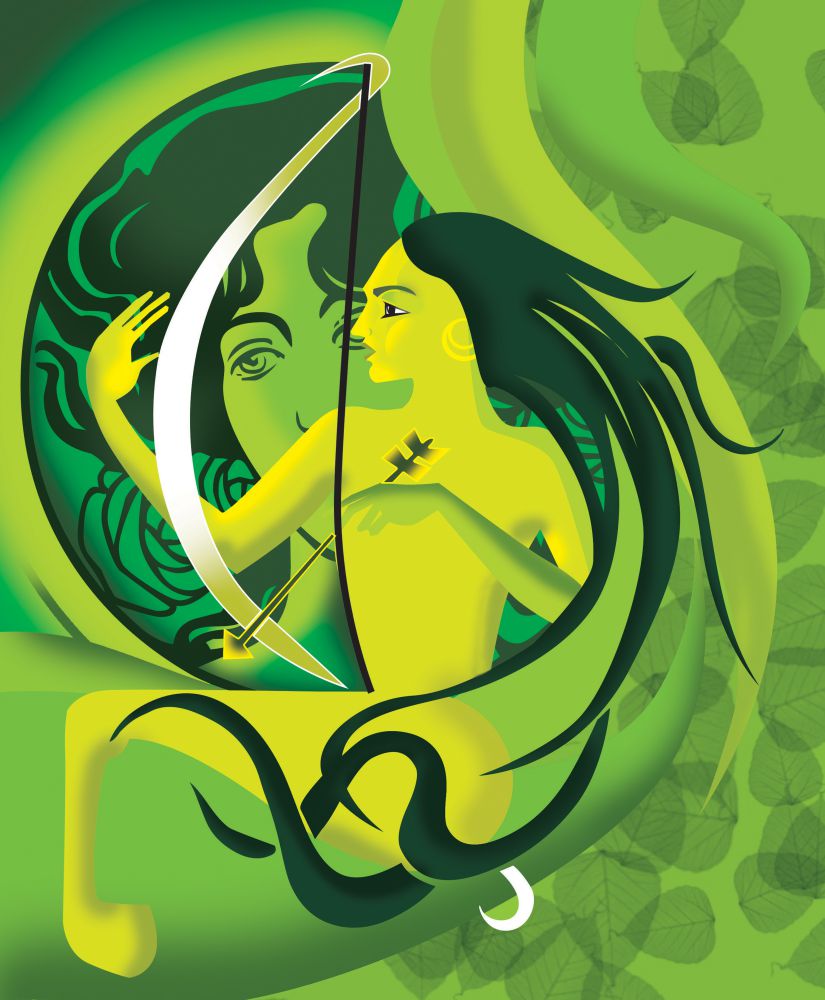 Sagittarians, who are born between November 21 and December 22, are the discoverers, explorers, dancers, and philosophers of the zodiac. While looking for meaning everywhere, they chase adventure and share their enthusiasm with others.
Kim Bassinger, one of the most charming Sagittarian women, said, “I feel as if there are two people in my body: Me and my intuitions. When I act against my intuitions, I always get into trouble. When I follow them, everything runs smoothly.” Yes, it’s exactly like this. Sagittarius is the sign of intuition, as well as actions with the help of inspiration. As members of this mutable fire sign, Sagittarians act using their intuitions rather than their minds, just as Dean Koontz said, “They see with the eyes of their souls.” The fire element gives them impulsivity, and they use their intellects through their intuition, often giving and taking inspiration.
Let’s begin with the symbol of this sign, the centaur. In ancient Greek mythology, a centaur is a creature that is half man and half horse and characterized by courage and wisdom.
Understanding the centaur myth goes a long way when evaluating the life perspective of Sagittarians. They have animal instincts and human purposes for their arrows, always aiming at the sky. Their arrows are aimed at searching for meaning, and aiming at the sky represents the discovery of the Divine on Earth. The centaur’s hooves represent nobility, rapid journeys, brutish nature, and long distances. However, the other half of the centaur, the human part, aims his arrows at the sky. This represents distant horizons, divinity, the sky, outer space, religion, philosophy, and working for the welfare of humanity… The centaur carries both these two tendencies. Being ruled by the second largest benefic body, Jupiter, (the first is the Sun) Sagittarius carries all the elements of Jupiter: a wide optimism; a love for distant horizons; a tendency to assertiveness, risk taking, and gambling; a desire to seek meaning; and prophecy.
Thanks to their magnificent intuition, Sagittarians are talented prophets. They really are masters of religion and philosophy. The well-known soothsayer Nostradamus, born on December 15, was a Sagittarian. The mystic and philosopher Osho is also a Sagittarian. Osho’s books have been translated into many languages, and his quotes are shared through the social media every day.
Naturally, when searching for the meaning of life, you can find it through inner and outer journeys. Sagittarians are discoverers and explorers of outer journeys, looking for different experiences around the world, but on the other hand, they may choose to make inner journeys instead. A Sagittarian who does not explore new horizons is dead. They have to travel, see, research, read, and feel inspired and enthusiastic. If they lose these, they cannot grasp their lives.

Vanity Is the Shadow of Sagittarius…

Sagittarians love adventure and run from one to another. Steven Spielberg is a Sagittarian, and the Indiana Jones films are good examples when describing the nature of Sagittarius: Freedom and adventure are their trademarks. On the other hand, they are traditional, religious, fanatical, and moralistic, and they have a strong feeling of justice. They may overly rely on themselves, thinking that they know everything and being arrogant at times. These are their shadows. Because they have blind confidence in being able to change the world into a better place, Sagittarians can be real fanatics. This fanaticism can transform into tyranny, so it’s unsurprising that dictators like Pinochet, Franco, and Stalin were Sagittarians.
Sometimes they feel like they can fly and subsequently risk their lives, although they do not generally do this, working instead at maintaining a prestigious status. They are restless and need action and sports because of their horse-like nature. Sagittarius is often emphasized in the charts of footballers and sportsmen. Pierre Von Hojdonk, İbrahim Kutluay, Emre Aşık, Nihat Kahveci, and Katherina Witt are a few examples of this. Bruce Lee, who combined philosophy and martial arts in cinema, was also a Sagittarian and a mix of all the sign’s archetypes: war like, keen on far horizons, philosophical, sporty, artistic, and searching for meaning…
Sagittarians are also talented at music and dance—they cannot stand still. They can compose unforgettable melodies with the help of their deep inspiration. Ludvig Van Beethoven, one of the greatest composers of all time, was also a Sagittarian. Frank Zappa, Jimi Hendrix, Frank Sinatra, Edith Piaf, Tom Waits, Sertap Erener, Christina Aguilera, and Tina Turner are other examples. They all have a healing voice specific to Jupiter. Because Sagittarians are optimistic, fun, and outspoken due to their arrogance, they can also be good humorists. Woody Allen provided the best examples when he said, “My biggest regret is that I am not another person” and “I would not want to be affiliated with any club which accepted me as a member.” Ben Stiller and Noam Chomsky are also Sagittarians, as were the famous authors Mark Twain and Arthur C. Clarke.
Sagittarians also chase spirituality and the unknown. The famous British poet William Blake was a Sagittarius, and he wrote poems related to esoteric subjects and even drew some spiritual illustrations for tarot cards. Jim Morrison, also a Sagittarian, was inspired by a quote from Blake about the doors of perception, calling his group The Doors.
Sagittarians hate being bored. They always want to be enthusiastic and inspired, and they also give enthusiasm and inspiration to others. For example, you could suddenly decide to go bungee jumping because a Sagittarian convinced you it would be the best experience of your life. Or, you may jump on a plane unexpectedly because you become convinced that a village in Thailand would be the best vacation location ever. Sagittarians incite both themselves and others. If you lack self-confidence, just find a Sagittarian friend. He will bring you a magic mirror and do everything so you can see anything you want in that mirror. Do you want confidence, enthusiasm, discovery, experience, and play? He will give you all these.
The charm of Sagittarians comes from their friendliness, calmness, generosity, excitement, and love of adventure. They also infect others with these.
Brad Pitt, who all women like but was bagged by Angelina Jolie, is a Sagittarian. Scarlett Johansson, Julianne Moore, Tyra Banks, Jane Fonda, and Oprah Winfrey are other well-known members of the sign. Writing and publishing also suit Sagittarians. They are also good working in the press.
They do not easily marry because they are really fond of their freedom. For them, love is an experience. They are afraid of intimacy, but when convinced, they may marry and become good spouses. They like to be friends with their lovers. The women of Sagittarius are good mothers. They are a type of parent that children like, because all children like to play, jump, and laugh with their parents, and this is what Sagittarian parents are good at.
Because of their outspoken nature, they sometimes fall into needless disappointments and resentments, although their jokes are never aimed at hurting others. They do not have the pessimism and agitation of Scorpio, but they may make mistakes because of their excessive optimism and fanatical blindness.
If a Sagittarian lover tells a man that he is going bald, but that she loves him anyway, he might feel like he has been punched in the stomach and his self-confidence beaten. This is her way: If she sees her lover losing his hair, she says it. She also says she still loves him. There is no harm in this, because he already sees he is losing his hair, doesn’t he? She loves him, and that is the only thing that matters. She loves him even if he goes bald, but not everyone likes their lover being this outspoken, especially Capricorn, Virgo, Cancer, Leo, Aries, and Scorpio. Some people will find Sagittarians to be rude, and they can make many enemies because of this trait. However, they eventually win people’s hearts with the help of their optimism and lovely smiles.
If war breaks out, Sagittarians go off half-cocked, believing they will win the battle. They do not deign to use intrigues and tricks. They may lose the battle, however, because Jupiter, the planet of luck, favors them, and life is showing them that losing this battle was in their benefit.
They can be successful in any field they find meaning in, but they cannot be accountants, bankers, librarians, archivists, or historians. They seek the bigger picture and leave the details to the earthly signs. They are people of ideas, enthusiasm, and creativity. Everyone needs a Sagittarius friend to help them see the Sun during the dark days.