Home > Astrology > Astrological Chart for 1453: The Conquest of Constantinople
Astrology 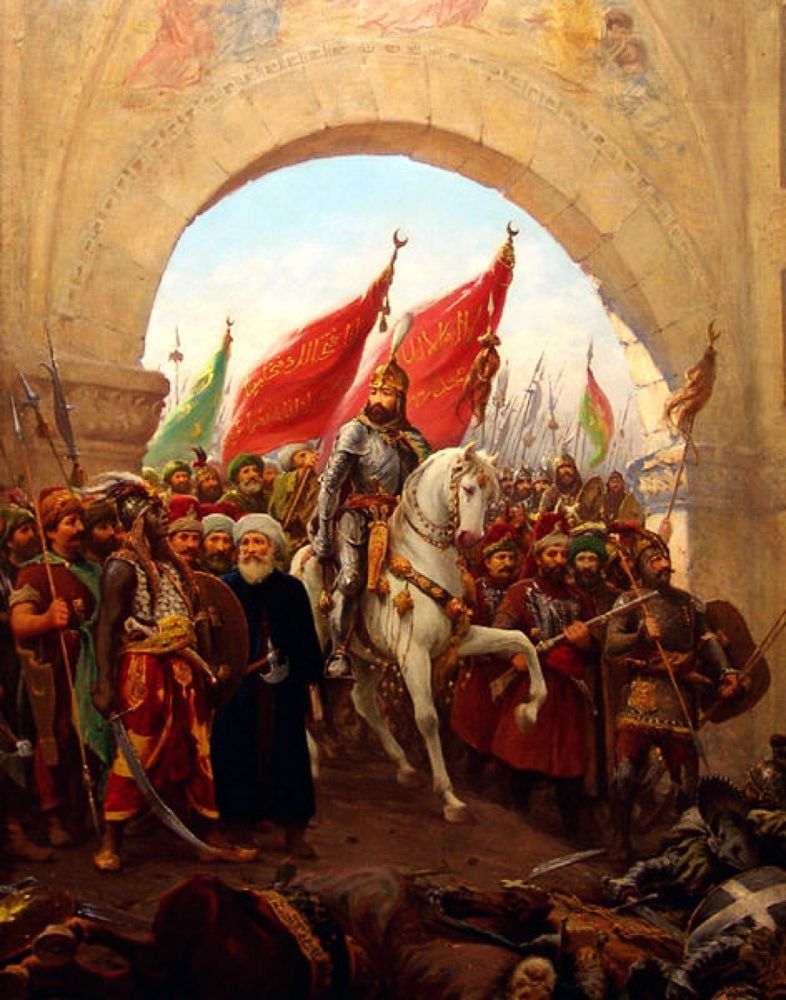 Some historians claim that the conquest of Istanbul ended up the Medieval Age and gave start to the New Age which lasted till the French Revolution in 1789 and the Byzantine scientist who escaped from Istanbul had an active role in the Renaissance and Reform movements in Europe. Now let’s see the astrological aspects of that monumental event which shaped the history and caused crucial developments. Astrology is not only forecasting tool; it is also lights up the past events and also helps us to see the future with an objective and holistic view. As the great leader Ataturk told “The ones who do not know their past can never know their future”.

The Ottoman Army arrived at Byzantine city walls in April 6th, 1453. The Sun was in Aries in its exalted sign and the Moon and Venus were in Pisces on that day. Just like in the natal chart of Mehmet II. (March 30th, 1432; early morning, Edirne) 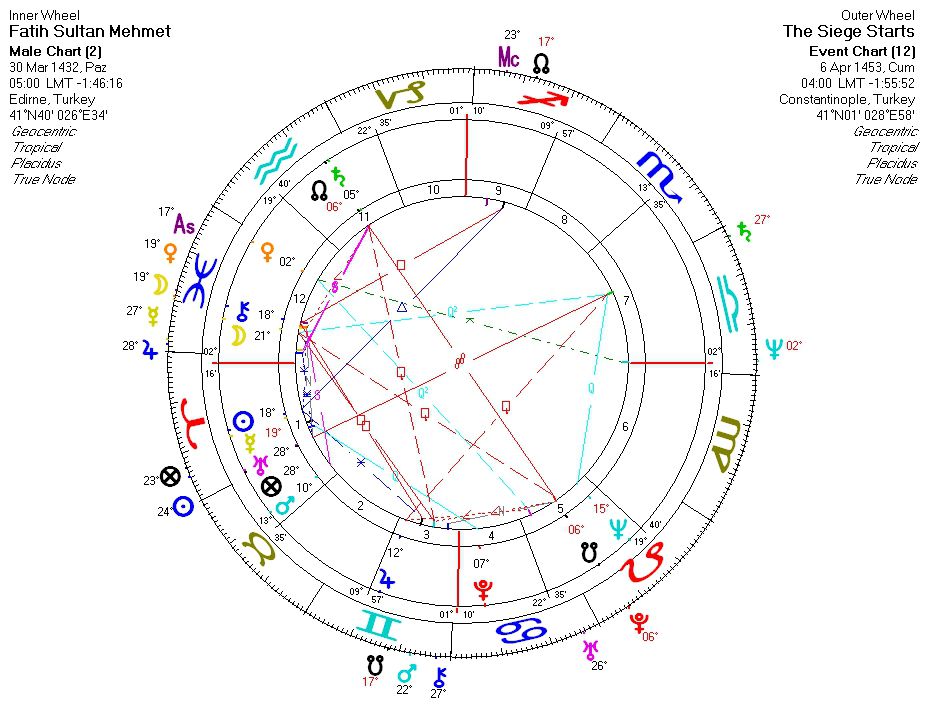 Venus, Moon, Mercury and Jupiter were on close longitudes. The alignment of brightest celestial bodies just before the conquest is really meaningful! After that night, the city walls were shelled. The Moon entered into Aries. That was the first day of the siege which would last for 54 days.

On April 9th, the new moon was in 28 degree Aries. The degree of the new moon was opposed to Saturn that was retrograding in 28 degree Libra. All these positions prove that the conquest of Istanbul required great efforts; the armies were faced with many obstacles and the getting to the other side of the city walls and conquering Istanbul was a tough challenge. The obstacles would be overcome however it would not be that easy!

The heavy bombardment began on April 12th. Interestingly, on the same day Jupiter entered into Aries which is ruled by Mars, the planet of wars and conquests. As I will mention later, the Sun, Mercury and Uranus are all in Aries in Mehmet II’s natal chart. Jupiter’s – the planet of achievement and expansion – ingress into Aries indicated that he would achieve many victories and gain power in the following year.

Istanbul was conquered after four big crusades on April 18th, May 6th, 12th and 29th.  During the conquest, Mehmet II showed his military genius as in his natal chart the Sun and Mercury were in conjunction with Uranus, the planet of genius, in Aries. For example; the ships were carried out on the land. Many viziers and pashas were against that genius idea however he was determined.

Ships are carried out on the land

Both Byzantine and Ottoman historians agree that 30-70 ships were carried from Tophane to Kasımpasa coast from the land on the night of April 21-22, 1453. Ottoman fleet made an attack to Halic on April 18th however they failed. On April 20th, they were beaten by three Genoese ships which were sent by the Pope. This defeat demoralized the Ottoman navy. So, another plan was put into use. The Ottoman ships which were built in a forestland before (some historians agree that place was Okmeydanı) have been carried from the land and has been launched in Halic.

Astrological evidence shows us many interesting connections about that event. Mars was in conjunction with Chiron in the last degree of Gemini during the attack on April 18th. Chiron’s wounding affect was in touch with Mars, the planet of war. On April 19th, Mars enters in Cancer. This shows that a significant naval warfare will be coming soon.  On April 20th, the square between Mars in Cancer, Jupiter in Aries and Neptune in Libra begins to be activated; the Moon also enters in Libra in the afternoon and triggers that T-square. At the same time, Mercury and Venus are also in Aries, the sign that represents wars and Venus may also be included in that T-square because of its close tolerance. All these astrological significations show that the battle between the Ottoman and Genoese ships were a tough one. On the evening of April 21st, the Moon moves along Libra and before making a conjunction with Saturn at the last degrees of that sign she opposes Mercury, the significant of plans and tactics. Perhaps the Ottoman Emperor decided to carry the ships from the land at that night and later shocked his opponents (Mercury and Uranus were in Aries) by that extraordinary plan. The plan was executed on the night of April 22nd. Possibly, the moonlight also helped them to execute that plan at night. The full moon in 12th degree of Scorpio on April 23rd obviously revealed the shocking plan of the Ottomans.

Lunar Eclipse: The signal of the conquest

In the movie Fetih 1453, which tells the story of that conquest, the people of Constantinople projected the conquest of the city because of the lunar eclipse which took place when the city was under siege. Lunar and solar eclipses are important astrological events; they signify rapid and dramatic changes. The ancient people were aware of that affect.

Just a few days before the conquest, during that partial lunar eclipse, the Moon appeared in the eastern horizon and the Sun appeared I the western horizon. The position of the Sun and his conjunction with the South Node announced the fall of the Byzantine Emperor Constantine, as the South Node represents the fated effects and the fall. The eclipse was in Sagittarius showing that the cultural and religious themes were about to change and that event would create important reflections in international arena.

Sagittarius represents expansion and new horizons. By the help of the conquest of Istanbul, the Ottomans expanded in the Balkans rapidly. Some historians claim that this conquest pointed out the real end of the interregnum. After the conquest, the Ottoman Empire has been the brightest country of the Islamic world and begun to shape the world politics.

Sagittarius also rules the cultural and religious themes as well as a wise attitude towards these topics. After the conquest, the people in the city were informed that they were free in their beliefs and religions. Istanbul has been the center of tolerance where the people from different beliefs and cultures lived in harmony and preserved its historical and cultural texture since it has been conquered by Mehmet II in 1453.

The Chart of the Conquest

In the book “Byzantine History” by Dukas, it is written that Mehmet II consulted astrologers about the time of the last attack. In his book Dukas told “The Emperor did not want to attack before the time arrived which was advised by the astrologers.”  We also know that this information also exists in the book “Mahrûse-i İstanbul Fetihnâmesi” written by Taci-Zade Cafer Celebi. According to the information given by İsmail Hami Danisment – a historian and linguist -, the attack has started between 01:00 and 02:00 am in May 29th and Istanbul has been conquered between 07:00 and 08:00 am. At that time, Mars and Uranus were in conjunction in Cancer on the eastern horizon and Jupiter, the planet of victory, was on MC. Below, you may see the chart casted for May 29th, 1453 07:00 am.

The researches show that Mehmet II entered into Istanbul at the afternoon of May 29th, 1453 with his 200 bodyguards when the dust settled. However we do not know the exact time for that. We only know that he watched the city and proceeded to the interiors to investigate the critical places, he passed the Serpent Column and reached Hagia Sophia. He then gets down his horse and prostrates and prays Allah and gets into the church. He tells the people not to be afraid and go to their homes securely. We know that it was around 15:00 when the people got out of the church. So, he must have entered the city around 14:00-15:00. In the chart casted for 14:30, we see that the Sun and South Node had a conjunction in the ninth house and this signifies the fall of Emperor Constantine. On MC we see Mars-Uranus conjunction in Leo that symbolizes Mehmet II, who was then named as “the Conquerer” (Mars), who started an era (Uranus) and gained power (Pluto) after that conquest.

In this chart, Mars the planet of conquests is digressed from Saturn square, the planet of challenges and approaches to conjunct with Uranus. The completed Mars-Saturn square shows that the city walls have been surmounted and the city has been conquered. The approaching Mars-Uranus conjunction shows that the shock which will be felt by the Christian world after the conquest of Constantinople. It is said that the scientists who went to Europe after the conquest have initiated the renaissance which led to the end of Medieval Age and start of the New Age. On the other hand, some historians do not agree with that opinion and they tell that the New Age began with the Printing Revolution (1444) or the discovery of America (1492). However, the conquest of Istanbul is the beginning of the new age for the Turkish history as it is one of the most important events of our history. On the other hand, the military genius of Mehmet II is also praiseworthy. The Mars-Uranus conjunction in Cancer symbolizes it beautifully. Mars rules wars and fleets; Uranus rules creative thinking process, inventions and shocking efforts and Cancer is related with the seas.

In the chart of the conquest, the Sun is in 16 degrees Gemini and in partial conjunction with the South Node. This is a very meaningful case astrologically showing that Mehmet II is predestined to conquer Istanbul and it was the right time for that. South Node represents the past events that were fated and Sun represents great kings, emperors and generals. That combination shows us that the divine plan was in process: the fall of the Byzantine Empire fell and the rise of the Ottoman Empire. We also see the same rise in Mehmet II’s chart.

In his chart the Sun, Mercury and Uranus are all in Aries and on the day of the conquest Jupiter, the planet of victory and achievement, transits Aries. Pluto also transits Mehmet II’s South Node in Leo and shows that he will gain power in a predestined way. The planetary position in the sky of the conquest day fits properly with Mehmet II’s chart interestingly. In another article, I will be evaluating Mehmet II’s chart in detail.

Öner DÖŞER, a leading Turkish astrologer, has many followers in the social and national media, including 22 million internet TV viewers. He started to study astrology with Hakan Kirkoglu, further studied with Robert Zoller and earned his AMA degree. He founded AstroArt School of Astrology in 2005 in Istanbul where he trained more than 700 students until now. He also teaches astrology in Girne American University since 2014. In 2010, he organized an original online-live-interactive training program for the first time in Turkey which Turkish and foreign astrologers also take place as teachers. He has 20 books published, 3 translated into English and articles in the Astrological Journal. Since 2012, he has organized the International Astrology Days in Istanbul with foreign astrologers, a sixth is planned March 2017.