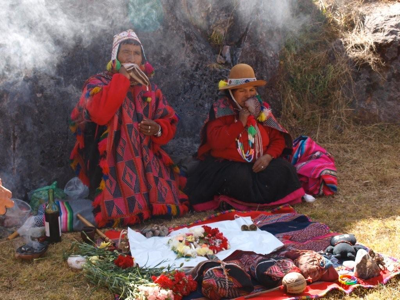 The Q’ero are the last of the Incas — a tribe of 600 who sought refuge at altitudes above 14,000 feet in order to escape the conquering conquistadors.

For 500 years the Q’ero elders have preserved a sacred prophecy of a great change, or “Pachacuti,” in which the world would be turned right-side-up, harmony and order would be restored, and chaos and disorder ended.

The Q’ero had lived in their villages high in the Andes in virtual solitude from the world until their “discovery” in 1949. In that year, Oscar Nunez del Prado, an anthropologist, was at a festival in Paucartambo, in southern Peru, when he met two Indians speaking fluent Quechua—the language of the Incas. The first Western expedition to the Q’ero villages then occurred in 1955.

Four years later, at the annual Feast of The Return of the Pleiades taking place in the Andes, the gathering of 70,000 pilgrims from South America were awed, and the crowd parted to let the Q’ero, unannounced and wearing the Incan emblem of the sun, make their way forward to the mountain top to make known that the time of the prophecies was at hand. They were welcomed by the assembly and were told, “We’ve been waiting for you for 500 years.”

Recently, Q’ero elders journeyed to North America in fulfillment of their prophecies. In November 1996, a small group of Q’ero, including the tribal leader and the head shaman, visited several cities in the US, including New York, where they performed a private ceremony at the Cathedral of St. John the Divine.

The shamanic ritual had not been performed for 500 years. But in the very home of those who symbolized the former conquerors of their Incan ancestors they shared their ritual and knowledge, not only with interested Westerners who were learning their ways, but also with the Dean of the great cathedral, thereby symbolically and spiritually linking the two continents of North and South America. 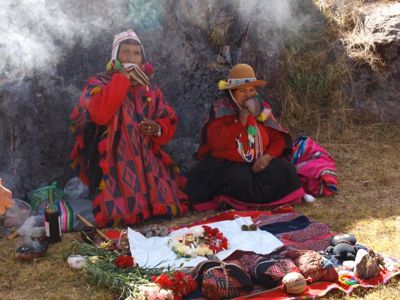 According to ancient prophecy, this is the time of the great gathering called the “mastay” and reintegration of the peoples of the four directions. The Q’ero are releasing their teachings to the West, in preparation for the day the Eagle of the North and the Condor of the South (the Americas) fly together again.

They believe that “munay” – love and compassion – will be the guiding force of this great gathering of the peoples.

The new caretakers of the Earth will come from the West, and those that have made the greatest impact on Mother Earth now have the moral responsibility to remake their relationship with Her, after remaking themselves,” said Don Antonio Morales, a master Q’ero shaman.

When the Spanish conquered the Incas 500 years ago, the last Pachacuti, or great change, occurred. The Q’ero have been waiting ever since for the next Pachacuti, when order would emerge out of chaos.

For the past five centuries they preserved their sacred knowledge, and finally, in recent years, the signs were fulfilled that the great time of change was at hand: the high mountain lagoons have dried, the condor is nearly extinct and the discovery of the Golden Temple has occurred, following the earthquake in 1949 which represented the wrath of the sun.

The prophecies are optimistic. They refer to the end of time as we know it — the death of a way of thinking and a way of being, the end of a way of relating to nature and to the earth. In the coming years, the Incas expect us to emerge into a golden age, a golden millennium of peace.

The prophecies also speak of tumultuous changes happening in the earth, and in our psyche, redefining our relationships and spirituality. The next Pachacuti, or great change, has already begun, and it promises the emergence of a new human after this period of turmoil. The chaos and upheaval characteristic of this period will last another four years, according to the Q’ero.

The paradigm of European civilization will continue to collapse, and the way of the Earth people will return. Even more importantly, the shamanic elders speak about a tear in the fabric of time itself. This presents an opportunity for us to describe ourselves not as who we have been in the past but as who we are becoming.

Pachacuti also refers to a great Incan leader who lived in the late 1300s. He is said to have built Machu Picchu and was the architect of an empire the size of the US. For the Incas, Pachacuti is a spiritual prototype — a Master, a luminous one who stepped outside of time. He was a messiah, but not in the Christian sense of the only son of God, beyond the reach of humanity. Rather he is viewed as a symbol and promise of who we all might become. He embodies the essence of the prophecies of the Pachacuti, as Pacha means “earth” or “time,” and cuti means “to set things right.” His name also means “transformer of the earth.” 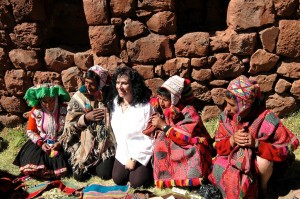 The prophecies of the Pachacuti are known throughout the Andes. There are those who believe the prophecies refer to the return of the leader Pachacuti to defeat those who took the Incas’ land. To many spiritual seekers the return of Pachacuti is taking place on the collective level. It’s not the return of a single individual who embodies what we’re becoming, but a process of emergence available to all peoples.

The Q’ero have served as the caretakers of the rites and prophecies of their Inca ancestors. The prophecies are of no use unless one has the keys, the rites of passage. The Star Rites, or “Mosoq Karpay” (The Rites of the Time to Come), are crucial to the practical growth described in the prophecies.

Following the “despachos” (ritualistic offerings of mesa, or medicine bundles) at the ceremony in New York City, the shamans administered the Mosoq Karpay to the individuals present, transmitting the energies originating with the ancestors of their lineage.

The transmission of the Mosoq Karpay is the ceremony representing the end of one’s relationship to time.

She has led a wide variety of international classes and retreats on topics such as shamanism, metaphysics, and traditional Japanese Reiki. She has guided individuals through powerful, ancient rites of passage based on Peruvian shamanic traditions, and I also lead a course called “Awakening the Illuminated Heart” based on Drunvalo Melchizedek’s School of Remembering. A workshop entitled “Navigating Your House of Mirrors” helps people unearth hidden and repressed parts of themselves. She is also an Integrative and Spiritual Divorce Coaching Professional, having studied with Debbie Ford and graduated from the Ford Institute. In 1989, she founded Spirits of the Earth®, a spiritual adventure travel company that guides people on spiritual journeys to Machu Picchu, Peru.

Farewell to the Dark Ages