Home > Traveller > The Peaceful Address Of My Soul: Ayvalik 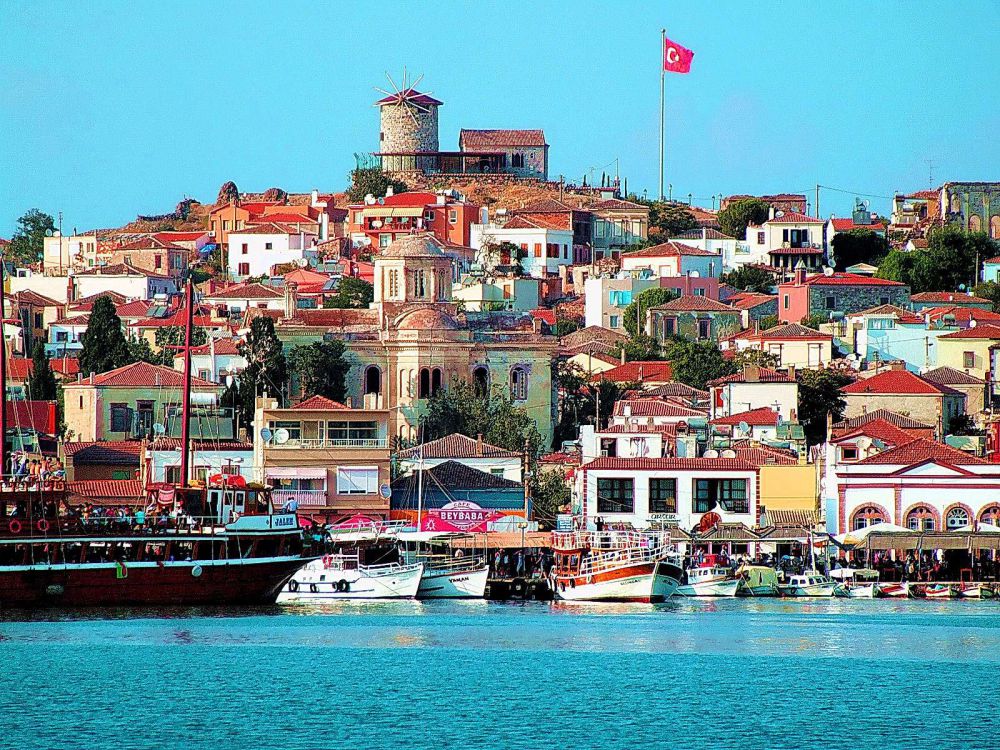 Ayvalık. For many people it’s a peaceful, lovely coastal town. For me, it’s almost part of me.
I was in college when I first visited there. It reminded me of my childhood, the steep pebble stone streets, the chatty old women eating sunflower seeds on the pavements and the smell of the bakeries. It was so unique and modest at the same time.
That was my first northern Aegean experience. I fell in love with the clean crystal turquoise water of Sarmısaklı Beach which extends 17 km long and  is Turkey’s second longest sand beach followed by Patara. We were fascinated by the romantic aura of Cunda Island and the unforgettable boat tour on the lapis water.
As a consequence of my love for Ayvalık, 2 years after that journey I got hitched up with a guy from Cunda whose ancestors came from Crete and settled there. And this beautiful place has been part of me since we met and got married. It is my homeland now. Life always finds a way of flirting with you.
It’ s been almost 20 years since we met and Ayvalık and Cunda have changed a lot, but they are still unique and still modest. First of all, most of the Ayvalık and Cunda’ s residents are immigrants from Lesvos and Crete Islands. Almost all of the population came as a part of the exchange programme after Turkey’s War of Liberation. The real owners of these lands are now living in Greece. So the owners are Greek and the successors are half-Greek. Isn’t it a beautiful combination? The locals are quite familiar with living next to the Christian culture since they were neighbours for over three centuries with Crete and Lesvos. They know their habits, culture and traditions well. As a result some ironies exist in the region affecting both cultures. Even though almost the entire community is made up of Muslims, after fasting 30 days for Ramadan they make no big deal about washing down their Turkish coffee with homemade liqueur. Most of the elder population  have managed to avoid learning a word of Turkish and they often talk about and miss their own islands. Of course there are so many sad stories on both sides about being forced to leave their homelands.
Almost all the mosques have been converted from churches, although there are two churches which are still as they were and can be visited. I think Ayvalık and Cunda are the only places where you can not just reflect, but also still live in the Greek traditions – not as much as it was 40 years ago, but it’s still can be seen.

The Peaceful  Address Of My Soul: Ayvalik

With its fresh air filled with oxygen, mild, and yet wild, exceptional picturesque views, the wonderful mixed smell of the sea and oregano and extraordinary cuisine, Ayvalık has a relaxing and refreshing affect on me. Especially during spring and autumn, she offers an extra beauty. This cute coastal town takes its name from a clam called “kydonia”. At the same time, kydonia is a kind of wild quince from the region. It’s believed that’s where the name derivates from.
The tiny pebble streets of Ayvalık are still appealing to the eye with their limestone houses. The lively marketplace on Thursdays, and the centre of the town, are very nice to wander around and see the everyday life. Sarmısaklı for swimming, Çamlık for long walks are beautiful parts of the town and not to be missed.
Just at the entrance of the main street in the centre is the beloved İmren Patisserie that welcomes you with its famous dessert made with local lamb cheese and its homemade lemonade.  After this, you will most probably want to swim to Lesvos! Don’t miss the opportunity to try it. It’s a cult.
For a modest, cheap but ‘granny-made’ kind of lunch I suggest you visit Chef Nihat (Nihat Usta). Try the artichoke, orca, squid cooked with olive oil and the kokoreç (lamb intestines well cleaned, wrapped in a rod and grilled served with oregano, cumin) served seasonally in the small restaurant. Spring is the best time for the region if you are a gourmet since all kind of herbs are available and the seafood is served in wide variety.
In the evenings, go to Tik Mustafa which is a Greek kind of tavern, with no live music, it is very modest but with delicious food again. It’ s said that in the 60-70s, all of Turkey, especially the West coast, was full of this kind of taverns (meyhane in Turkish). People used to come for a drink after work and eat what is cooked at the tavern for that day.  Since your family would be waiting for you at home, you’d come to have a quick drink, eat in small plates, hang out for an hour and leave.  Today they are hardly found. So don’t miss out on Tik Mustafa to experience this traditional experience. Try the fish and the seafood.
Eating fish and drinking rakı is of course an absoulute must for Ayvalık nights. If you want to dine in a typical restaurant by the sea, I suggest you go to the Town Club (Şehir Kulübü) where you can find all kinds of meze (a selection of hot and cold dishes served as hors d’oeuvre) and good fish and seafood.
I’ m sure you wouldn’t want to leave Ayvalık without having tried Ayvalık tost (a toasted sandwich filled with delicatessen goods). It’s spread all over Turkey during the last 10 years, but of course the best ones are made in Ayvalık. My favourite buffet is in the town square near İs Bank. It’s a typical one. Try a mixed tost with all the ingredients (sausage, ham, cheese, pickles, ketchup and tomato) but ask for one with the local cheese. This is usually consumed as lunch or breakfast with tea. But it’ s also nice snack on in the late afternoon with a beer.
In the town centre there is a church dedicated to the Archangels Michael and Gabriele, a modest one but nice to visit. Çınarlı mosque is another historic point to stop by.
After just  10 minute drive, and you’ll reach the Sarmısaklı Beach – a sandy long beach that lies on the south of the town. Next to Sarmısaklı Beach there is Badavut Beach with its turquoise water.  For an exceptional swimming experience, a boat tour is the best choice. The turquoise waters and the bays hidden among the small islands will make you dizzy!
On the way to Sarmısaklı, what you will see on the right side on top of the hill is Şeytan Sofrası (Satan’s Table). It greets you with its panoramic view, offering you an amazing sunset, covering all the region and the infinite Aegean Sea under your feet.

Even though the charming beauty of Cunda is undeniable, spring and autumn sit well with Çamlık where green meets blue. It blinks to the sea while snuggling the pine forest at the same time. It calls you to its calmness in which you will feel alive right down to your cells. The sunset among the pine trees and the smell of sea mixed with nature, makse it an an ideal place to take long walks by the seaside.
The small wood piers reaching to the sea give you an incredible opportunity to watch the fish nonchalantly playing inside the crystal water. Away from all the hustle and bustle of life, tracing the fish in the shiny water is an inexpressible joy. You are accompanied by butterflies and seagulls along the walk.
The beautiful houses of Çamlık enrich the amazing view. The sound of the fishing boats is so tempting in the mornings; it is as though an inevitable call from sea to unify with nature. There are several hotels and restaurants to visit in order to enjoy this charming beauty. Berk Hotel, Çam Hotel and Mavi B&B are some of the options.
Çamlık invites you to attain the clarity and wisdom that you can reach by combining together nature and sea right down to your pores. It’s for a reason that Siddartha reached true wisdom through a river in nature.

A Greek Beauty In Turkey : Cunda

I always considered Cunda as a heritage from the Greek, the pre-owners of the island. The beauty should be well kept and cared, as a sacred duty,  as Cunda is really a exceptional hidden gem of Turkey. The cuisine and the architecture are unique and all over the island you can trace the Greek traditions and atmosphere.
During the past ten years Cunda has became very popular both among the local and foreign visitors. It attracted the tourist population with its unique cuisine at the first place, then it has became more and more trendy year by year. Plenty of new fish restaurants opened,  and countless boutique hotels popped up every year all over the island.
The island is attached to Ayvalık with a drawbridge and a causeway. 50 years ago, sailing boats were the only way to reach the island. The immigrants settled on the island after the exchange and resumed their Greek way of living here. They learned fishing, construction, cuisine and have lived there as they were living on their own island. They still speak a Greek dialect they used to speak in Crete, particularly when they want to hide what they are saying from the children and the non-local brides.
It’ s a great pleasure wandering around the island’s narrow pebblestone streets and the adorable limestone houses. Gazing at the windowsills and the doorknockers shows  how skilled the masters were. Each of them is a masterpiece.
If you seek a panoramic view, climb on top of the peak called Lovers Hill. It’s only a ten minute walk. Watch the amazing sunset over the sea. There is a church without a roof in which you will take nice shots. And the windmill nearby is a nice opportunity for a short break and a quick coffee. There is one church now turned into a museum, again dedicated to archangels Mikhail and Gabriele.
At night, Cunda leaves itself to the blowing wind on a feast. My favorite restaurant is Deniz. Lale Restaurant by Nihat is more expensive but it is another good choice. Vongole in wine sauce, kidonia (clam), a local herb cooked with squid, sea urchins, a local fish (adabeyi) cooked with shrimp are all very unique tastes to wash down with a glass of wine or raki.
For a nice coffee break with dessert Ayna, a tavern with live music Moshos on the town square, is highly recommended.
The best boutique hotel of the island is Madya. Madya is near the seaside, a bit far away from the hustle and bustle, but it offers you a very nice picturesque view of the sea. If you want to rest in the middle of green and near a wonderful beach, Ortunç Hotel is a expensive but exclusive choice. I am sure you will find a convenient place among this plethora of choices.