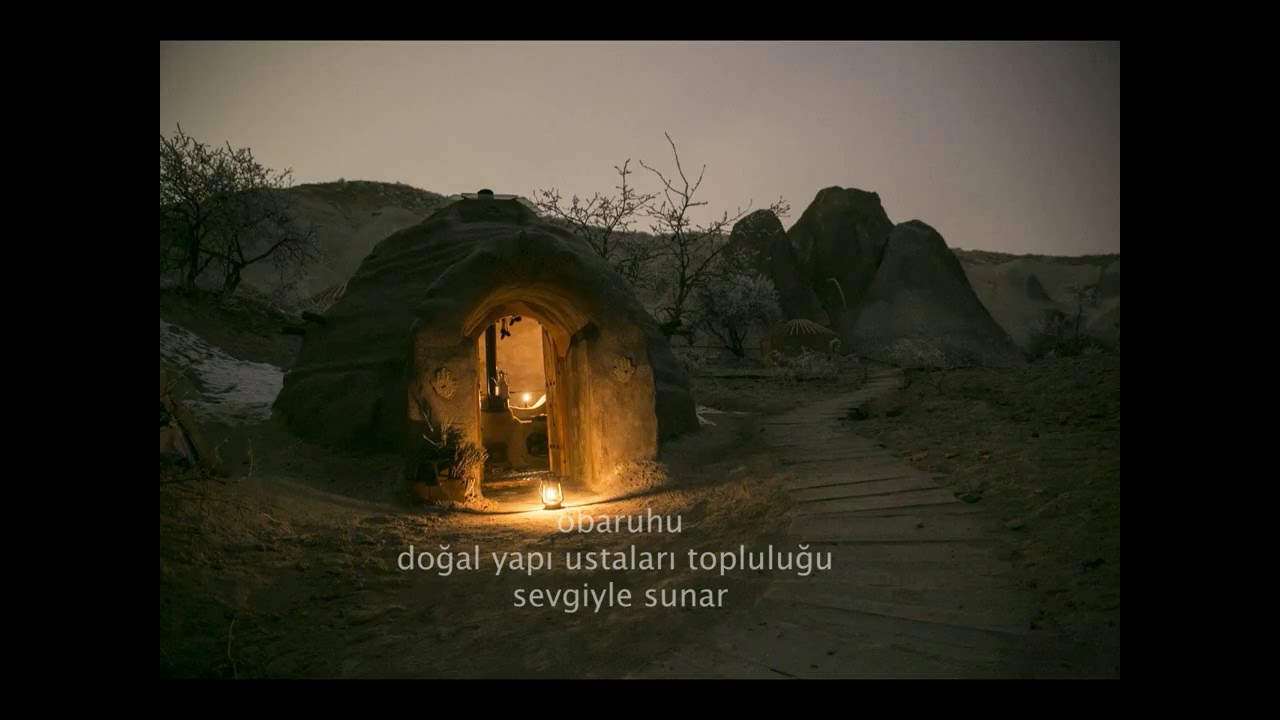 The Anatolian Jam is over. Things are rocking, but nothing’s happening. It’s such a mess in my head that I just want to hide. I saw photos on Facebook. Some people built something called Topak in Cappadocia, and it’s maybe the most beautiful settlement I’ve ever seen. It’s like a mother’s womb, and the people there, who smile pleasantly and look beautiful, are called the Obaruhu (the spirit of nomads).

Then my life changed. I encountered a beautiful yet tough life after love. I had no energy left for anything else. But the Obaruhu then decided to come near us and help us. Bilge was also coming over, my dearest friend from senior high. Whenever Bilge is there, I laugh. I’m relaxed, and I can be as I am. I see, and I am seen. What’s more, Bilge was going to see me in my new life, in my new home and my natural habitat. We were going to play with both the Obaruhu and Bilge, but it didn’t happen. I had to leave, so we couldn’t play.

A year passed before I saw it on Facebook, and Bilge pushed me too. The Obaruhu had decided to build a temple for Topak. It was the most amazing production combination possible in this country. Melodi was coming as well, another darling from high school with the most incredible brain. She’s the answer to the question of whether aliens exists, because they do, and Melodi is proof of it. Melodi cannot help but goof around, but I don’t mind because of her positive attitude (which is every alien being’s right) and her wonderful heart. Çağım might also come over. If Çağım is there, I will feel great, safe, and supported. I feel understood. In my opinion, Çağım is a cross between a squirrel and a mountain. 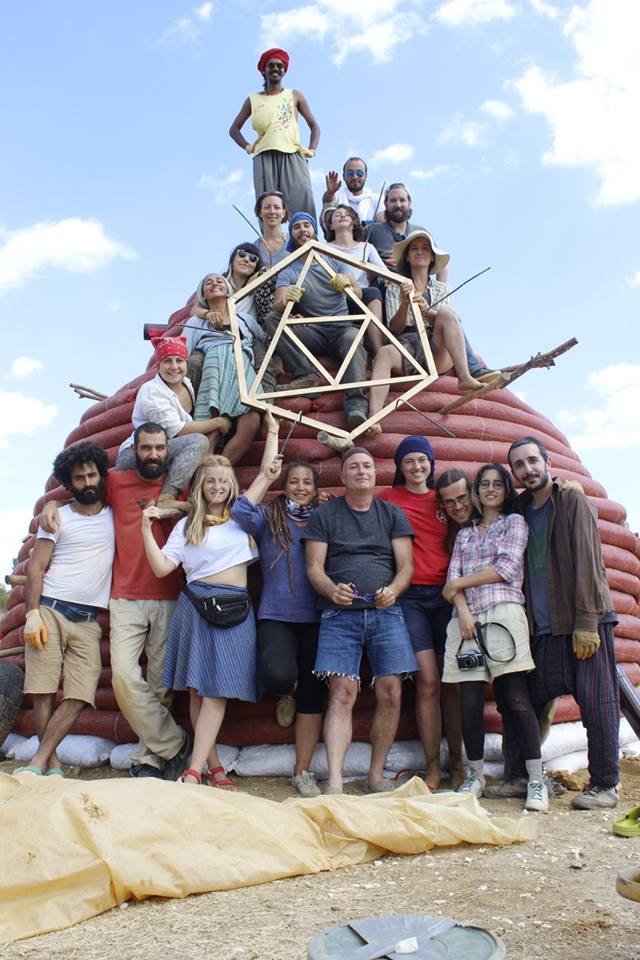 I was bedridden for a year, and every part of me ached from the immobility. I was creating new records for laziness and fixity. I longed to play with the Obaruhu, Bilge, Melodi, and Çağım, and this weighed on me more than anything else, so I enrolled weeks in advance.

I went to Badem Han, where we would build the temple, the day before just so I could chat with my friends. We were reunited. We then sat with Burcu and did not shut up for at least five hours. If it were up to me, I would have talked for five million hours.

On the day of the meeting, all the marvelous colors began to pour in. It was just as I had dreamed it: a parade of beautiful people, all unique to themselves and completing each other. We sat in a circle to introduce ourselves, and everyone first expressed their wishes before making small drawings with the colors and elements they wanted. I said the building was merely a vehicle. I was there to play, and I would endeavor to see the beauty in everyone rather than their flaws. I intended to share everything that I had learned, saw, and become. When I said I didn’t like to work much, it triggered a few giggles. I drew my volcano, naturally in red where the fiery magma was, and sat back down. I wanted to say much nicer things, but I was so excited that this was all I could manage.

Following the circle, we retrieved Bilge’s tent, which the strong wind had blown away, and Melodi, Bilge, and I squeezed in it, compensating for the lost time with laughter. In the middle of the night, the only wish that I and Züriye held came true: Çağım, who everybody thought wouldn’t be able to make it, joined us. Many people woke up and ran towards Çağım half-sleeping, some fell down as they ran and some hugged him, me among them. Every wise being loves Çağım immensely. It was like a festival itself in the middle of the night. I said to myself, “Okay, now we can truly build a temple of love and unity. You’re going to work your ass off, Baraniko.”

We woke up at six, Ernie’s favorite number and a time I’m more used to going to bed at rather than waking up. Why? We were to play the earth game. The weather is so cold, and my ass felt like it would freeze off. We went to a cemetery shivering, and they covered our eyes. We began to walk in silence, holding on to the person before us. We walked barefoot among pine needles and pebbles on the ground. With the cold things stabbing at my feet, I decided to raise my arms and shout, “Dad! Why did you leave me?” but stopped myself rather than ruin the game. My disdain for being a spoilsport surpassed my urge to schmooze, and once this sweet agony had passed, they placed some earth in our palms. We said one word and put it in the bucket for later use when building the temple. When Burcu said, “Unity,” I leisurely said, “Let there be love.” Maybe you’re a bit tired of hearing this, but I have no other issues. Let there be love, and the rest will be easy.

The first day was a warm up, and the building process went very slow. The next day we were flying, though. People were sieving soil, wheeling sand and earth in barrows, and mixing them with water. Others passed mixture-filled buckets from hand to hand in a human chain. Some emptied buckets into bags, while others took measurements or ferried water. A few even just shared their music. It was just like the movie Fight Club.

The next day, we went to the shore to play the water game. We first listened to our story from the voice of beauties before heading into the sea and making a circle. We began to play our game of singing songs, all among the surprised but sweet looks of the dear inhabitants of Keşan. Lots of kids were in the sea laughing, playing, and singing. I don’t know how to swim, so I wouldn’t normally go in the cold sea. What kind of magicians were these Obaruhu? Yet I found myself laughing hysterically, splashing water, repeatedly jumping into the middle of the circle, and singing at the top of my voice. Scorpio–Cancer Baraniko seemed to be slowly finding his self.

We continued raising our temple, helping each other out, listening to the stories, tolerating flaws, and sharing our food, drink, and tobacco. We worked in four shifts every day: before breakfast, after breakfast, under the midday sun, and until the sun went down. After lunch, people would offer gifts. Melodi explained sacred geometry one day, for instance. She’s been telling me this stuff constantly for 15 years, and I always loved it, although I never really understood it. Until this workshop, I thought my primitive two-dimensional brain was to blame. But then I saw how Merve and Burcu also listened to her with eager eyes and open mouths. At one point, she was talking about something like rombotiko, and we lost a few people to brain hemorrhages. I thought, “Okay, it’s not just me. Us mere mortals can only understand about a half of what our dear friend is saying.”

One evening, we played the fire game. We first paired up and filled each other’s plates with food. Without talking, we then fed each other in turn. Çağım and I, two hairy guys, fed each other in such elegance. My inner voice at first said, “We are so tired. Screw this stupid idea,” but I loved how it all flowed, and we laughed our heads off about it. They then lit the fire, and we all played around it for a while. Then, Aslı, a wonderful and genuine person who had spent a lot of time at Badem Han, began to play with fire and dance. Every time I watched the fire, I wanted to become the fire.

As the temple rose up, we began to benefit from its shadow during the daytime, and we used it for shelter at night. Volkan also organized ceremonies inside at night, with many of us smirking in our sleeping bags. Of course, I wasn’t active in any of the bedtime stories. I slept approximately three hours throughout the whole workshop.

Finally, we played the air game, which involved closing your eyes and letting go of your body in one piece. The main objective was to learn to trust that the people around you would catch you. This was difficult for me. I bent my knees and so on, but I couldn’t entirely let go of my body. Then Mukund, a boy from Bombay with a beautiful gaze, saw this Anatolian boy. Organizing the entire group into one circle, he then placed me in the middle. At first I thought, “Shit! I’m so exposed.” Then I said, “Screw it!” and completely let go of myself. To the left and right, to the front and back, I didn’t bend any part of my body even a morsel. I didn’t hesitate whatsoever. They caught me every time, no matter how many times I did it.

This is how we built the temple. We placed the hexagonal hood and the glass on the roof as well. We couldn’t get enough hugs as we parted. We said farewell to everyone, but alas, the final coating was not complete yet. We stayed one more night as the Obaruhu and our high school threesome completed most of the coating. We embraced each and every one of Badem Han staff, especially Aykut, for feeding us, welcoming us as their guests, opening up their hearts to us, and even working alongside us. They finished the remainder of the coating after we left. Bless them.

Our temple has two triangular doors, one symbolizing the female and the other the male. Each one of us came through those doors and transformed into something beautiful. From earth, sand, and water, we built something great, but we also built actual temples in each other’s hearts, falling, laughing, playing, and crying in unity and in love.

Let there be Love. And there is Love. Thank goodness.

There’s Only One Way Out: Become Aware

Dost Can Deniz, 6 months ago
Life

A Voyage From Moment to Moment…

Are You Really Standing Still?