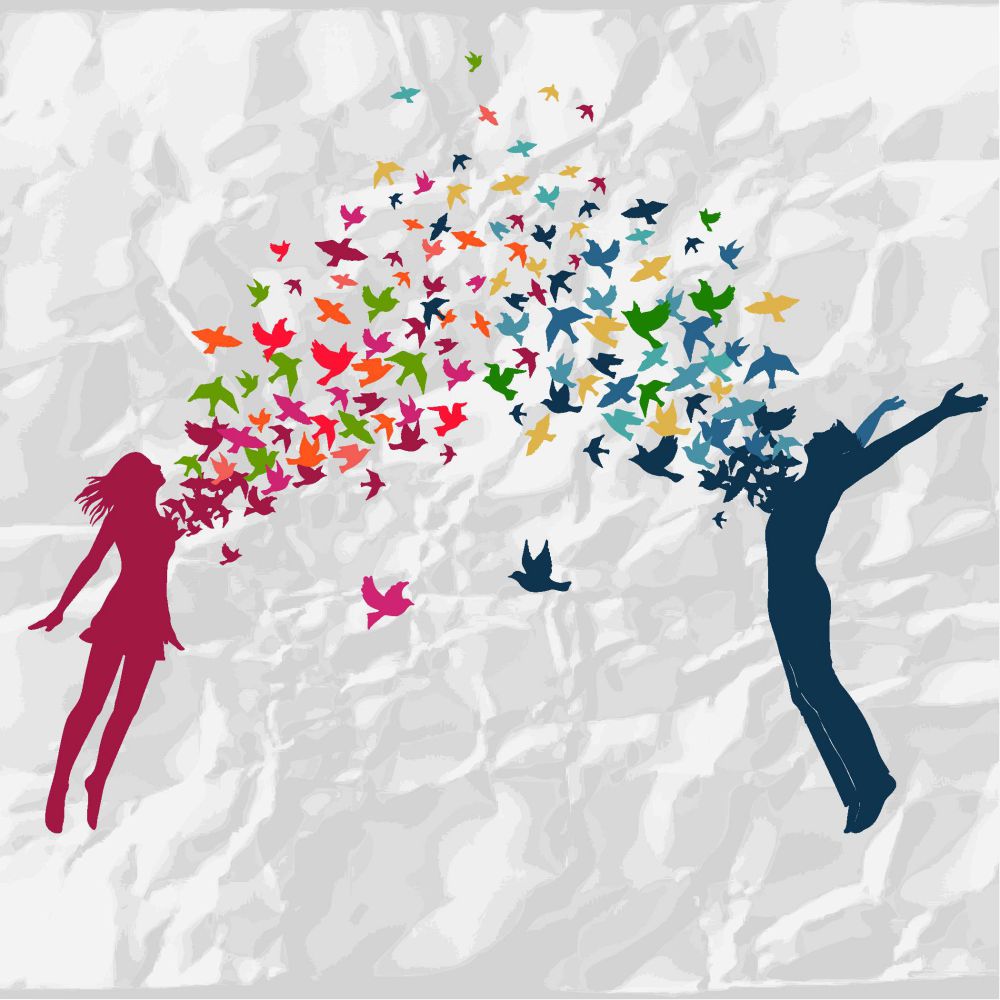 We know the English verb “live” describes the act of experiencing life, but what if the flow of life is beset by obstacles?
The word “live” then turns around and becomes “evil.” This evil—our egos, which we possess in abundance—are the parts of ourselves that are blocked, hindering the flow of energy. The ego then resembles a river that has become blocked by a newly built dam. When the flow of a river is halted like this, the riverbed beyond the dam becomes dry and full of stones. The life along the riverbed then slowly ceases to be. Its existence continues, but in a changed form, because life never ceases to be… Where there is water, there is abundance, fertility, and vitality. Where there is no water, there is only dryness, aridity, and exhaustion.
These conditions are also true for souls whose egos are ruled by evil. They are dried up inside because their river is unable to flow. To find a means to escape this drought, they chase after water. At first they pour water into the dry river from glasses, and then from bottles, and then later from buckets. They even try adding water from tankers, but it’s all in vain. Whatever they try, it just wets the stones for a short while before the riverbed dries up again. In this way, greed  takes form. We desire possessions because we feel it’s the way we can return water to the dried-up riverbeds of our souls. We chase after fame and power, because these will enable us to hire water tankers to refill our rivers, but the satisfaction this provides is short lived. Every time the riverbed dries up again, a new greed for water arises.

How can this vicious cycle be ended?

The only solution is to recognize the existence of the dam and slowly get rid of it. The reservoir behind the dam is the real power of the human soul, the water that never ceases to be. It flows from the mountains, renewed thanks to the ecological balance. The water flows and flows. To destroy the dam completely and suddenly is not a solution either, because the sudden release of water will flood the land downriver. The river will eventually find its old course again, but there will be a lot of devastation in the process. So, the best solution is to open the gates slowly and let the water flow again. Once the flow is balanced, the dam will be no longer needed and can be destroyed. The moment the gates are opened is similar to when someone becomes one with his soul, and the destruction of the dam is very much like when the soul flows as itself once again.
So, what can we do to reverse the “evil” in our souls, so we can “live” and remove that massive dam? It’s actually very simple. We need just reverse the actions we took to build it. By accepting what we resisted, embracing what we rejected, shaking hands with everything we refused to accept,  starting what we have constantly postponed, and allowing everything into our hearts, we will open the gates and start dismantling the stones one by one.

What do you mean by all this?

I bet your inner voice is saying, “Seriously? You mean to say that from now on, we should open our hearts to cheaters, deceivers, rapists, and other evil people? We need to embrace them? You are so naïve! That’s not the way to fight evil.” This same voice has told you so far to fight evil, reject it, and hinder anything that is different. You are virtuous, great, and good—it is everything else that’s evil. Yet that friendly voice also constantly criticizes you, telling you how silly and stupid you were. It fed on us because it thought it was real, but in fact this voice was just murmurings of the dried-up riverbed.

So, what about the darkness?

There was a computer game I loved when I was young. It was called The Prince of Persia, and the most difficult puzzle was when the prince met his shadow. No matter what you did, you couldn’t beat the shadow, and this was because the shadow was you, so it imitated your every move. This was the key to the solution. Upon encountering the shadow, the prince draws his sword, but you need to sheath the sword again so the shadow will as well. The shadow then becomes one with the prince. This scene is the best definition of awareness I can think of from a computer game. It also contains the key of how to integrate with the dark energy. In short, fighting is not the solution, but accepting it will change everything.

Are we confused at this point?

Your inner voice is saying again, “Big deal! If George Washington had thought like that, would you be able to write this article? Would the US still be under English rule? Should we surrender when the darkness attacks?” Sure, there may be times when we have to defend ourselves from an attack, but if we have light rather than darkness inside while defending, then everything changes.
Jesus did not damn those that tortured him, even though he experienced incredible pain. Instead he pleaded to God, “Forgive them, for they know not what they do.” He knew these people acted in ignorance, unaware of whom they really were.
Atatürk, the first President of Turkey, fought all his life, but he never carried hate in his heart for the enemy. He had to fight, because the circumstances forced it. He even said, “Unless war is imperative and vital, it is murder.” Also, after the Battle of Gallipoli, he said, “To the British, French, Australian, and Indian heroes who lost their lives on this soil, you are on the soil of a friendly nation. Sleep in peace, side by side with our soldiers. Mothers in faraway lands,  cease your tears, because your sons are in our hearts. They are at peace and will sleep in comfort. Because they have lost their lives on this land, they have become our sons.” He embraced the enemy, and he never said, “What the hell were you doing here anyway? You died for nothing!”

Allowing a place in your heart should not mean to just lie back and do nothing. You can do whatever you need to do and take the steps you need to take, yet while doing so, your heart and soul should be full of light and your inner river should be flowing. Only then will you be able to create the change. Instead of cursing the darkness, you will illuminate it. You will also affect those around you with your light and the healthy air of your river. Those whose souls have dried up will start following you, wanting to learn how you made it happen. Tell them, and some will understand and start working on their own dams, but others will not be ready and refuse to understand. However, the darkness can never reach you while you are the light. I can see the rejection in your eyes, but when you find your light, you will also discover immortality. Only your body leaves this universe, but you exist for eternity, because you are a part of the infinite being, and he continues to exist.

Tell me once more what it means to allow a place for our Beings in our hearts?