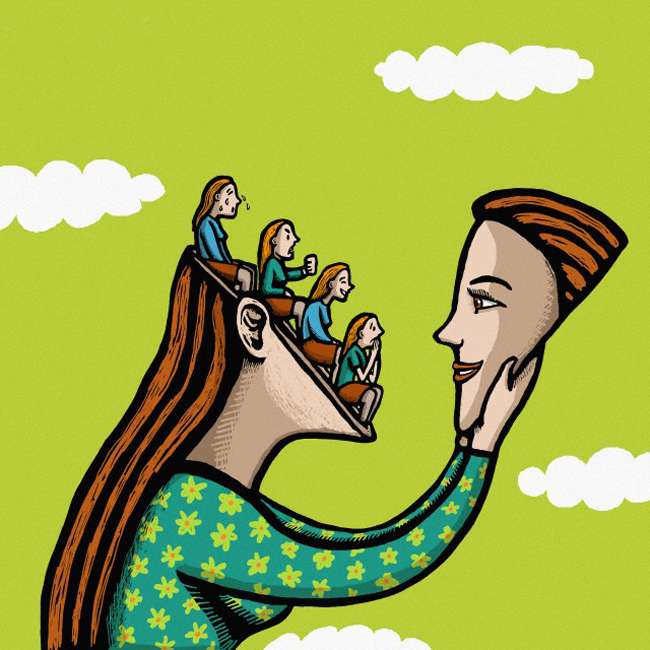 Since the beginning of the world, there’s a question frequently asked but not clearly answered: “Who Am I?” Various answers led to numerous perspectives; consequently, thought and belief systems emerged. “Unfortunately,” new age trends now become widespread in the twenty-first century due to these new thought and belief systems. I say “unfortunately” because though these doctrines are based on the necessity of knowing oneself and spiritual freedom, in practice, people take them as a modification and a kind of transformation of present systems. Only the minority succeed to bring the essence of these doctrines into their lives.

Screaming out, “we got over religion and we are leaving it behind,” people replace God with superego or the essence; devil with ego, worship with meditation, and continue their lives happily and don’t realize that only the outer cover changed. Let’s leave it as a topic for another day because this portion will only get longer.

What do I really want to do? Think loudly about my own answer to the question “Who am I?” and share it with you, starting with the most popular answers of people who deal with new age trends. I wanted to take the new age answers as the basis, because for many years, I thought they were my own answers, too.

To My Higher Self

I have a journal from 1995 which I reserved for my own essay collection, but it’s empty since I don’t have the habit of taking notes. One day, I found it by chance and saw the thing I had written as an intro: “To My Higher Self Who Created Me and Is Me.” Some people might exclaim “Wow!” Others may cheer “See the boy’s awareness at that age!” I should confess that I had no idea about what I meant to write. Since I used to spend nearly all my days occupied with spiritual knowledge, I was influenced by that culture, and I scribbled down such words.

Look at that: “To My Higher Self Who Created Me and Is Me.” I ask myself, “How many times have you felt the energy of these words through all these years?” Perhaps, it’s impossible for me to feel that energy. In fact, there is a problem with the sentence structure and a difference between “Me and Him”; although in some circles, they’re thought to be the same. Consequently, those lines consist of naive memories that make me smile; I have neither understood those words nor felt them.

Likewise, throughout these years, I’ve met many people invariably answering the question “Who Are You?” The most absurd responses include the ones who hug each other with dreamy looks affirming, “I’m That. I’m The Creator’s Light. I am The One…” Why do I believe these responses absurd? The other day I saw these same guys with prescriptions of Prozac given to them by their psychiatrists, and what’s worse, gossiping about each other. This is why such expressions always seem artificial to me. Here’s my instant reaction to these responses:

First an oooops, and then suddenly, “The Maker, the Creator, Light, the God.”

“Really? Is it possible you don’t even hear what you say? I only see a human with flesh and blood, and if you don’t mind, I’d say that you don’t look like God at all.”

I should emphasize that these answers include deep and very expressive meanings. However, it looks like a fly on a horse’s backside when they’re said by someone who uses the copy/paste method. In this case, only words with no energy.

Furthermore, some spiritual identities get trendy periodically, and then, everybody runs to get one. As soon as one of them is mentioned in a channeled form, you can see plenty of people feeding at the trough. Just before the year 2000, “light workers” were trendy. Then, the Indigos appeared, and very soon every two out of three people realized they were Indigos. Soon after, Shaumbra arrived and still maintains popular identity. Meanwhile, the crystal kids are in.

I easily predict that channelers will soon inform us about ruby kids and diamond kids; thus, we will complete our stone collection. We’ll be surrounded by rubies and diamonds. An auntie of 60 years used to jump around just two years ago and say, “I am an Indigo, moreover one of the first ones,” and now will soon say “Lady Blahblah has a wide open third eye and examined me to find out I was a diamond in fact!” I hope we’ll be wise enough to see that those are only symbols to facilitate the expression, not for us to put on our name cards.

Who Am I? Really?

First of all my friends, we are men (and women) living on this earth. For example, I am Hasan Celiktas—though I read a lot and expose many identities with a copy/paste method, and I used to roam around with this “I am the One” fantasy, and I’ve challenged many discussions on “We are the God,” and the like—the only “real” feeling I’ve ever felt is “I am Hasan Celiktas.” I am not a light worker or an indigo; nor am I a crystal or a jade or ruby; I claim not to be a diamond or Shaumbra or the master of light, or the god, and definitely not “The One.” I am Hasan Celiktas, and this is the only truth I feel and try to live by.

Don’t even think that those answers are false, nor do I refuse them. We are really and essentially precious and higher creatures (though, is any creature not?), but if we came to this world, we should live in this world. Unfortunately, we use these identities as tools for escaping because we claim no happiness about our lives and this world.

Since we can’t seem to succeed in changing the world or ourselves, we immediately change our identities; and therefore, you can see plenty of MEN trying to become “angel” or “light worker” or some other “spiritual” designation. I wrote MEN especially in uppercase because, if we are on earth, the major truth we hold is this: We may be our higher selves or this One or that One. Anyway, if what’s said is true, after death we’ll experience what we are forever. If you’ve come all this way to earth to experience the world, then dedicate all your life to “become your higher self”! Wouldn’t they ask you (they’ve already asked) “After death, you will merge with all you once left behind, but since you were so devoted to your before-earth experience, why did you leave to come to this planet in the first place?”

“I am That” is a real strong answer; even though, it’s not as strong as “I am who I am.” But, the way to feel this or that answer never passes through copying and pasting these designations everywhere or using them as a signature in some email groups or on Facebook or elsewhere. The way to find these answers comes by welcoming the reality that exists and living it. The real Being is this…Me, I have one reality:

“I am a man who lives on planet earth; I am Hasan Celiktas.”

What about your reality?

Ways and Means to Rebalance Humanity