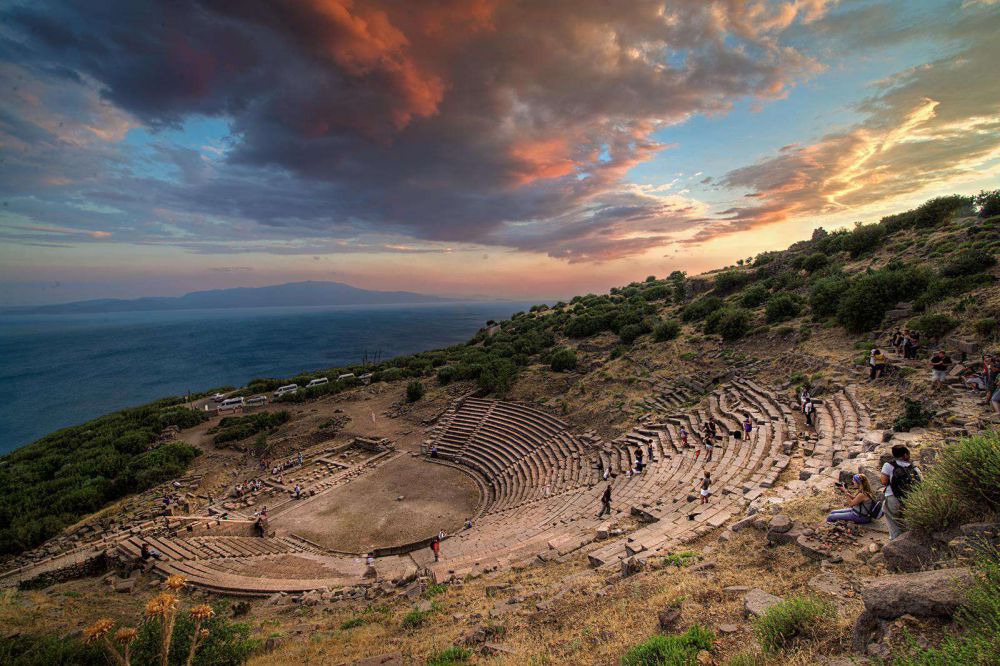 Assos; what I felt for the town was pure love at first sight, mingled with the dizziness of the love that I was in at that time. Assos, snugly located within the foothills of Ida Mountain, surrenders to the magnificent energy of the mountains blessed by Athena. It was like nowhere I had visited before.
It was the peace and calm that most deeply impressed me about the town. Though I first visited in April, I’ve experienced almost every season in Assos and that peace is never disturbed. I particularly liked breakfasting by the harbor, listening to the sound of the fishermen’s songs and their boats making the trip over to the island of Lesbos. Surrendering to the turquoise water of the north Agean sea is another great pleasure.
Assos, one of the most influential cities of ancient times, lies within the foothills of the Ida mountains in the environs of Çanakkale. Located very near to Troy, Assos became a city in its own right, hosting Aristo in its gymnasium. Although the city began life as a Greek ‘polis’, it continued as a large Roman city. Blessed by the surrounding volcanic area, Assos became very famous for its buildings made out of local stones, which have survived in remarkable condition in the village and the local harbor. This makes Assos one of the most picturesque towns of Turkey.
Assos is comprised of 3 compounds. At the highest point lies the compact village of Behramkale. In the middle, the ancient city soars into the sky with its famous Temple of Athena, while at the lower part at sea level are the harbour, beaches and hotels.

Behramkale is a fascinating place with its hospitable residents, cobblestone streets and local cuisine. The local cafe where time seems to stand still, will charm with its view of the endless Agean. Although the village is starting to attract more and more tourists, the geography of the village doesn’t allow it to grow.
The ancient city was founded in 8-9 B.C by immigrants from Lesbos and has been a Lidian, Persian, and Roman city. With its amphitheater and the magnificent Temple of Athena, both of which embrace the Agean sea, the city well deserves a visit.
A tiny cobblestone road links the village to the ancient city and continues on to the seaside. The boutique hotels and the turquoise water entice you to the seashore. Around half a dozen hotels and a few pensions are available every season of the year. My favourite is Assos hotel Kervansaray. Nazlıhan Hotel is a bit expensive but is a luxury option.
At night, the 50 meter long pier can be quickly covered, but it is still enjoyable to wander around the harbor. On the one side, the lights of Lesbos twinkle invitingly, as do the lights of the hotels and the village on the other side. Holidaying in Assos means a period of peace and stillness, mingling with the stars and the sparkle of the sea. Enjoy the sound of silence, and become one with the eternity of the Agean by plunging into Assos’ crystal clear water.
For dinner, I recommend the restaurants of the hotels on the harbour. They’re usually demi-pensions. For lunch, choose the small, local restaurants in the village to taste the local cuisine. Avcı böreği (a kind of pancake cooked with mince) is a famous local dish to wash down with a beer. You should also taste the zucchini flowers stuffed with rice.
The famous ice-cream spot, Ali Usta, will delight you if you are a fan of ice-cream. The silver-shop in the village with its beautiful designs and semi-precious stones is also appealing.

Ida Mountains
The mountain of Ida, where Paris the mischievous younger brother of Troy grew up, is an open gate to the highest energies and a great healing experience.
With its flowery villages in the foothills, the mystic Sarıkız area on the hill, and the steams and the springs in the depth of the forests, Ida is a heavenly place. It may even be a vision of heaven itself.
First, I’d like to mention the airy, green villages of Yeşilyurt and Adatepe, which are the two most famous villages on the foothills of the mountain. Yeşilyurt, with its beautiful hotels and pensions, lies within a fertile valley. It’s ideal for those who are looking to awake within fresh mountain air, walk in the forest and find peace in nature.
Adatepe is another picturesque village in a natural setting. The village is formed around a big square in the middle of the town with big plane trees, and includes some lovely hotels and guest houses.
In the depths of the mountain, two camping places welcomes you: Hızır and Endes. Both are absolutely ideal for those who want to have a holiday within nature and reconnect with their spirituality through activities such as yoga. The two camping places are also the best spots for those who want to enjoy the ice-cold waters of the steam without doing anything. The plane trees and the oleanders in the area will rejuvenate you, while the fluttering dragonflies and the butterflies will reconnect you with the joy of life.
To plunge into the energy of Ida and to witness the miracles that nature can provide, you should arrange a guided tour. You cannot visit the national park unless you have a guide. Within the national park, you are able to see the endemic species and walk in the forest. Most importantly, you will reach the Sarkız peak and its legends, allowing you to enjoy the calmness and the tranquility of the peak. Another spot is the Sütüven Spring which offers pleasant walks near the steam and a nice waterfall at the end of the road.
Assos and Ida are two charming spots to discover in the Northern part of the Agean Sea. They are both gates to peace, calmness and beautiful nature. The turquoise water, cold steams and springs, the unique cuisine will always draw you back again once you have visited.