Home > Traveller > Gateway To My Soul: Kas and Meis
Traveller 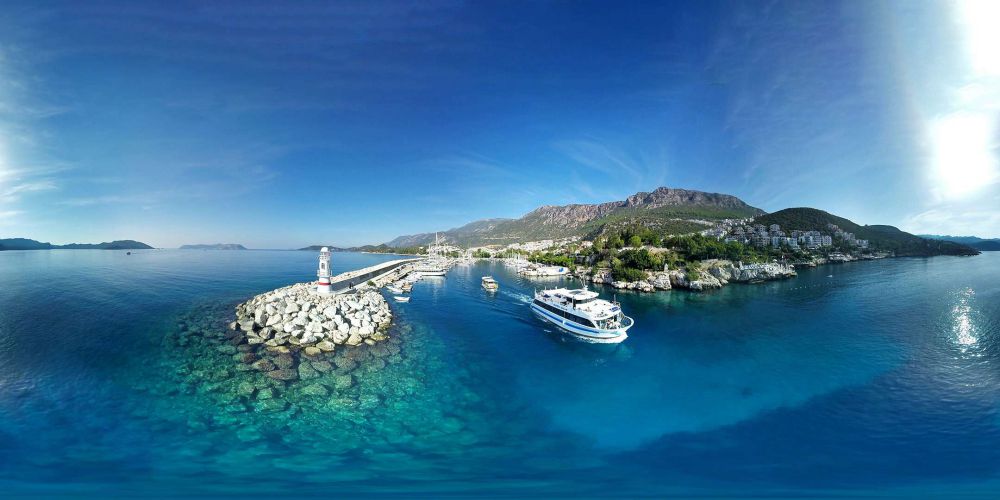 Some places are endowed with healing power, and the Lycian district is one such place.

What is it about Megisti – the Greek island that lies three miles off the coast of Kaş? I haven’t yet decided whether it’s because of Lycia’s weather or water, but Meis is as relaxing and restorative as Kaş. Ending the summer season in these two paradises which unify the beauty and love within us, lifted both my body and soul. If you don’t consider my little escape to Chios when I only managed a 10 second dip, I greeted and bid a fond farewell to this summer season in Kaş.

Although it is gradually expanding, Kaş still preserves its distinctive texture. From its ‘old golds’ like Bahçe Balık fish restaurant and the bars Deja-vu and Blue Bar, to the cozy pensions and shops, everything was as usual. As very often places end up being closed or spoilt during one’s absences, finding all these restaurants, bars and shops as delightful as how I remembered them pleased me no end.

Kaş is quite different to other coastal Turkish towns. The tourists in Kaş are pleasant and they have a gentle way of relaxing. That is exactly why I feel so drawn to this magnetic place. In Kaş, there is a timeless sense that joy and peace mingle in a harmonic way with the universe. While I’m there, my soul expands, flourishes and unifies, becoming as one with existence, flowing through nature to the sea.

This is my first visit to Kaş in October, one of the best times to visit in my opinion. There is no doubt that it is better than May. It is actually quite nice be making a habit of bidding an adieu to summers in Kaş. Though autumn, I embraced the summery days under the perfect sun that was in his full glory. It was clear that winter hadn’t reached the South yet. Although it was raining in İstanbul, we were living in a completely different reality: full of sunshine.

At night, we preferred to watch the magic views of Lycia from our hotel room balcony instead of heading into Kaş’ nightlife. I marveled at the quiet, dark blue, starry nights. The glittery boundary of the bay, which actually appears to be a lake, is framed by Meis Island’s lights in the still of the night. The sounds of our laughter became mingled in the splendor of the landscape.

Our cozy Hotel Lantana is in the Küçük Çakıl (literally ‘small pebble’) district. The owners, Michael and Müge, are a lovely, very funny couple. The start of each happy, glorious day was the breakfasts in the backyard. My favourite parts were the home-made jams which were different every day. My room opened onto a stunning view of Lycia via a balcony full of bougainvillea which filled my mornings with pleasure.

Widely known, Deja-vu and the Blue (Mavi) Bar are two pleasant bars that are the ‘sine qua non’ of Kaş. However describing them just as bars doesn’t really do them justice. Not visiting these bars while in Kaş is like going to Paris and not stopping by the Eiffel Tower. The heart of the town pulsates around these two spots.

Deja-vu is highly recommended to wash down a mojito or margarita, the favorites of the venue, while watching a stunning, magical sunset. You’ll realise that doing so is more than an ordinary pleasure; it’s an irresistible ritual that rounds off each day of your visit. A camera is essential for a visit to Deja-vu, as the glorious sunshine allows magnificent shots. On the other hand, Mavi is, in my opinion, more enjoyable after dinner.

If you like photography, don’t miss the terrace in Küçük Çakıl and the park that skirts from harbor to the district in which blue and green tones mingle. It is another excellent spot to be charmed by the Lycian sunset, history and nature.

In Kaş, there are plenty of choices for spots in which to plunge into the clear, crystal waters of the Mediterranean. The district is blessed with spectacular beaches and coves. If you like to swim in cool water, then you are in the right place. If not, then the water around Kaş might not be for you.

Olympos Beach is preferred by the locals. It’s a calm and pleasant choice, just next to the marina. Küçük Çakıl is a favorite of tourists, as it is in the hotel district and is only three minutes walk from the center. There are three amenities all along the rocky beach and there is no entrance fee. The food is quite good and the music is not too loud to disturb. It’s not to be missed if you like plunging directly into the cool waters, as I do. There is also a small pebbled beach trapped among the rocks which will charm you with its dark blue water.

Half an hour away, Kaputaş welcomes you like a scene from Hawaii. On a calm day, the beach offers a unique swimming experience. Regardless its depth, the seabed and fish can be clearly seen through the crystal sea. Its superlative turquoise waters and white sand makes Kaputaş one of the world’s best beaches. Büyük Çakıl and Limanağzı are other beautiful locations which can be reached by a short journey by sailboat. In order to visit Lycia’s virgin bays and coves, you have to take a boat tour from Üçağız to Kekova Gulf, just one hour drive from Kaş. Don’t worry about the drive; it is included in your tour. The Sunken City, Aquarium Bay and Simena are some of the spectacular spots on the tour.

It’s always amazing to be at the Sunken City in Dolichste. Daydreaming about the great civilization at that time has always been an attraction for me. Once upon a time, the city must have been very colorful with its dock, bath, harbor, monastery and wine caves. As legend would have it, after countless pirate attacks, the gods spared the city by submerging it into the turquoise waters of Kekova so it could keep its beauty forever.

While I was listening to the information given by the guide, my mind leapt from Kekova to Pompeii, two places where the cities and lives collapsed in just one night. I found myself daydreaming about the mystery of these turquoise waters, and wishing that this land would reveal more of its secrets so that we could learn more about its mysteries.

From what I understand from the tour information, my Lycian ancestors were also the forerunner of hippies, which made me understand my attachment to Kaş! Could it be a coincidence that the descendants of these peace addicted guys are now hosting the artists and the art-lovers of this country? I finally realized why I am so at peace in this town; it’s because peace is in the town’s DNA. The inhabitants were unaware of how to fight a battle and got tired of making wine! It’s a matter of curiosity how they managed to move to San Francisco! But that is another story for another time.

The most beautiful swimming point of the Kekova boat trip is Aquarium Bay; usually it is the first stop of the sailing boats. This is my 3rd favorite swimming spot in Turkey, after Habbele Beach in Tenedos Island and Assos. I am not sure if there is another place with water of this kind of vivid turquoise. The water is like a living organism; a transparent blanket. Aquarium bay is a sacred beauty which shares its magic is on behalf of humanity.

The last stop is Simena (Kaleköy) soaring with its signature stone houses ornamented with beagounvilles and topped with a splendid castle in the middle of the Kekova Gulf. Although it’s a steep climb up to the castle, it’s worth it for the marvelous, picturesque view of Kekova and beyond, especially when the sun is setting. 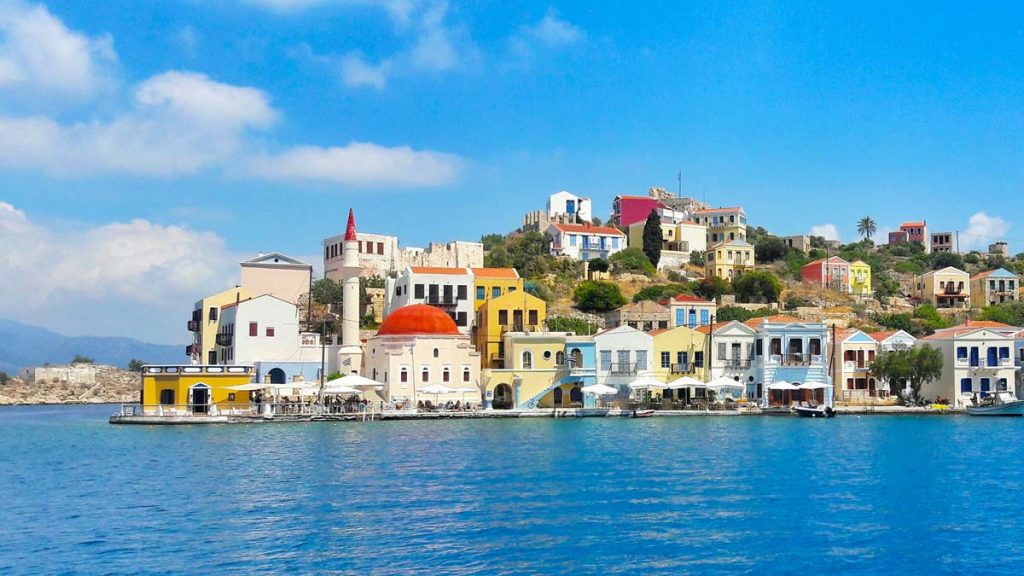 The Biggest Of The Small: Megisti

Just 20 minutes sail from Kaş, you reach the small island Castelorrizzo: literally “red castle”. It’s also called Megisti in Greek and Meis in Turkish. It has had several names because it’s gone through several hands! Though it is fairly small, its name “megisti” ironically refers to “biggest” in Greek since the island is the biggest of that archipelago.

Castelorrizo was, for me, the most valuable gift of this trip, along with Aquarium Bay, since I was quite familiar with the other spots. Amid splendid azure waters and picturesque limestone houses, the Megisti is seated upon a throne in a sacred place of my heart.

As with the other Lycian cities, the history of Meis is full of wars and raids. For many years, the island was relayed between the Ottomans, Italians, Greek and the French, not to mention the Rhodes knights. At the beginning of the 19th century, the population was estimated to be around 10,000. But it dropped off to 400 due to a poor economy, and of course various invasions, including the Second World War. In contrast with her astonishingly low population, Meis is still full of life with her colorful limestone houses in the Italian style, as well as delightful restaurants and cafes along the quay. The location of the legendary Oscar winning movie ‘Mediterraneo’ by Gabriela Salvatore invites you a tranquil isolated holiday.

As I mentioned before, the quay of megisti is full of cafes and restaurants which offer you spectacular examples of Greek cuisine. The cult favorite is the island’s fried small shrimps, which are almost as small as a sunflower seed and are consumed with their shells due to their freshness. The octopus salad is another unusual specialty of the island, and of course there are other traditional fish-based Greek foods to be washed down with a glass of ouzo: grilled or fried calamari, grilled salted octopus with oregano, herbs, sea shells and a wide variety of med fishes, to mention but a few.

To discover the island’s hidden treasures you should take a boat taxi. These take you to every single point worth visiting. Of these, the Blue Cave and Aya-yorgi beach are two remarkable spots.

The Blue Cave is a wonderful place to immerse yourself within the lapis waters of Megisti. We squeezed inside in our small boat while being forced to bend our heads. Although negotiating the tiny entrance to the cave is a bit scary, it’s actually very wide and high inside. Swimming inside the Blue Cave is a unique pleasure. The magic is the sunlight which is locked inside the cave in the morning, and remains there the whole day long, creating a luminous dark-blue lagoon inside. When submerged in this water, the body glows. We have officially become illuminated bodies, hail to our Arcturian bros! While in this water, I had a moment where I felt part of the infinite, at one with the Lycian waters within the blanket of blue.

Despite the six hour drive from Izmir, Kaş merits a visit for a tranquil, isolated holiday that will allow your soul to swim within the vibrant colours of nature, history and mythology. On my next visit, I plan to experience parasailing and diving, of which the town is considered as the capital city of Turkey.