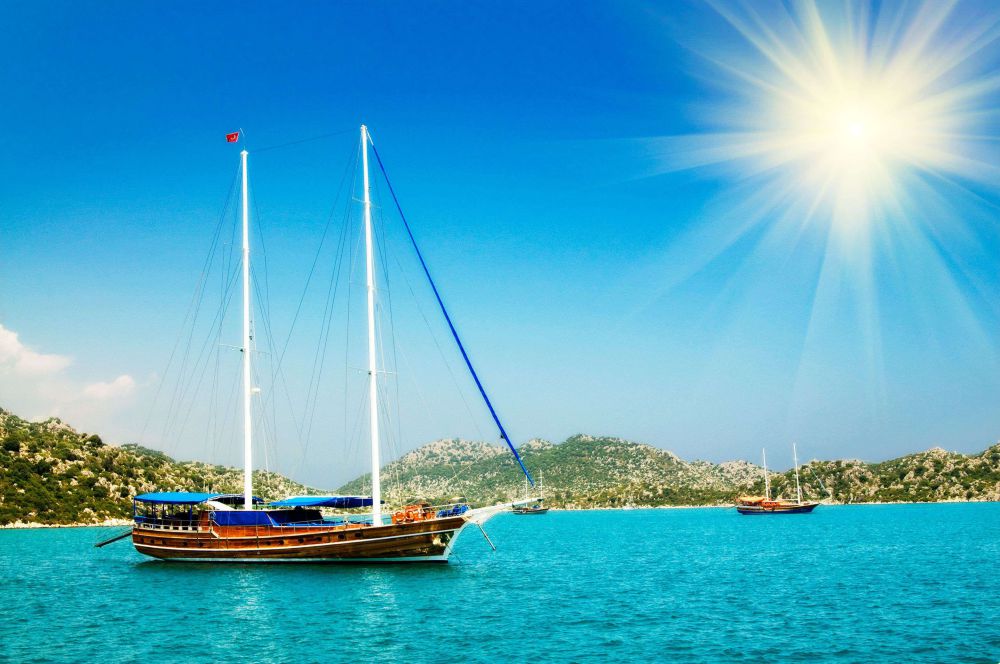 I walk out of a white building covered by bougainvillea and move slowly to the sea which glows under the unique Mediterranean sun. I notice the charming breeze coming from the hills behind me with their peaks reaching up to the skies. Phellos and Antiphellos, now Kaş, are two towns that received their names from each other. I stroll around the streets of Phellos above, one of the major cities of fourth century BC, which faces its harbour Kaş (meaning “eyebrow” in Turkish). Saluting Phellos from the middle of the water sits the island of Meis, meaning “eye” in Greek.

These two towns of the Lycian civilization serve as corridors opening to thousands of years of history. The main evidence bringing history back to the present are the tombs perched on the mountains blinking their eyes to those who enjoy the sea and the tranquility. So are many more of the sarcophagi you see around Kaş. The most famous of all of them, the King Sarcophagus, made of a mono-block piece of stone, is located on the high end of Uzun Çarşı [long shopping district] near some carpet shops. According to legend, when a man died, his wife would go into the sarcophagus together with him and close the lid from the inside. Unfortunately, the fact that a woman would sacrifice her life for her husband’s dead body must stay a mystery around these tombs covering the land of the Lycians, famous for their heroism. But, we do know one thing however: As Phellos lost its importance over the years, Antiphellos turned itself into an important and rich town attributed to the trading of trees from its cedar forests and sponge fishing.

As one of the important touristic centers in Turkey, this magical region in the center of many ancient cities is no coincidence. When you go from Kaş to the west, you reach Kaputaş, Kalkan, Patara, Xantos, Letoon, Sidyma, Pınara, Ölüdeniz, Fethiye and Göcek, where each one proclaims another corner of paradise. If you head east, you go by Üçağız, Kekova, Kyneae, Simena, Trysa, Demre, Myra, Finike, Adrasan, Olympos, Tekirova, Phaselis, Kemer and Göynük, ending up in Antalya.

Kaş, a focal point of antiquity, gives myriad reasons for attracting those ordinary vacationers and tourists interested in history. As you walk along the ancient walls facing Meis, you can take the road going to the Çukurbağ Peninsula to the west, where within walking distance, you come to the amphitheater, one example of these reasons. With its 26 rows capable of seating four-thousand people, this Hellenistic theater is known for unique carvings on its walls.

The closest point to Meis Island, Çukurbağ Peninsula, is also a nature paradise covering a 3 km walking path. The famous Lycian trail passes through Kaş as well and became popular over the recent years to attract visitors. Especially in spring and fall, there is heavy traffic of trekkers around Kaş and Kekova.

Between Sea and Mountains

For those who desire closeness to nature, two special spots should not be missed: Yeşil Göl (Green Lake) and Uçarsu Şelalesi (Flying Waters Fall [waterfall]) in Gömbe Yaylasi (Plateau), situated 80 km from Kaş at an altitude of 1800 meters. When you climb up the hills on your way to Gömbe, a volcanic lake and a wonder of nature welcomes you. The dirt road from Gömbe Plateau to Uçarsu extends about 8 km. Only your courage will tell you whether or not to dive into the ice cold waters of the little pond, but since you came this far, I would say try it. The waterfalls flowing down from Aygır Gölü (Lake) about 60 meters are worth seeing. Also in the vicinity, Tekke Köyü (Village) has a Shrine to Abdal Musa. The Alevis living in the area organize festivities every year in June; they dance semahs [a ritual of twirling dances] and make wishes at the waterfall. In Gömbe, eating goat meat in May is a mouth-watering experience. The trekking season starts at about the same time as the yearly migration of villagers from Kaş to the plateau of the Akdağ Mountains. This is the course most preferred by trekkers. The route begins at Subaşı Yaylası above Yeşil Göl and follows glacier lakes to the peaks of Akdağ.

The beaches of Kaş count many: Akçagerme to the west within walking distance; Büyük Çakıl and Küçük Çakıl Beaches to the east; Bayındır Harbour and Limanağzı to the southeast and İnceboğaz on the west at the start of the peninsula. There are no sandy beaches inside Kaş; however, the famous Kaputaş Beach sits only 10 minutes by car. You may encounter very few places worldwide with such a distinct color of the sea. The underwater currents of sweet water filtering through the sands give the sea its crystal clear, cold and turquoise-colored waters. Kaputaş Beach, in particular, reached by going down 187 steps, offers rainbows of unusual colors in the evening.

Incidentally, Kekova is one of the must see places before leaving the area. Reach it by boat or car from Kaş. Also, don’t miss going to Üçağız for a boat ride; it’s thrilling to see the sunken city under the water during the boat ride. The restaurants on the shore of Üçağız are priceless for lovers of fish and raki [anisette-tasting alcohol] at sunset.

One of the main characteristics that make Kaş popular today is their ranking as one of the world’s most beautiful diving centers. In the Kaş bay where, there are some 70 dive sites available. There are also a variety of diving experiences available, such as wreck diving, canyon diving, cave diving, Nif[BKV1]  diving, wall and tunnel diving. This is the richest region of underwater Turkey. In October 2006, an underwater archaeology park was found in Hidayet’s Bay. In addition, the wrecks make the region very attractive for both amateur and professional divers. You may find a great opportunity on holiday by taking a five-day training trip from one of the many licensed dive schools or getting your internationally-recognized certificate to step into diving.

Kaş and its vicinity offer numerous opportunities for nature activities, such as trekking, mountaineering and rafting. Also, this is one of the best places in Turkey for paragliding. After a short ride of half an hour or so, you arrive at the flight take-off point on the hill. You enjoy the beautiful views while flying in tandem with experienced pilots. If you have a taste for adrenaline, ask your pilot to perform acrobatic moves. Gliding in to the port of Kaş ends this great experience.

Walking, cycling, jeep safari tours and canyon crossing are all organized in Cyprus Canyon about 50 km from Kaş center. Kaş also holds one of the most popular sports in the sea—sea kayaking. It’s possible to see five different ancient settlements on a Kekova kayak tour.

Another route is Saklıkent (Hidden City) Canyon where tours leave from Kaş. The Saklıkent Canyon hike takes about an hour and a half for a 15 km walk. It entices you through ice cold spring waters running from the Bey Mountains. After the walk, you will never forget the tasty food you eat seated on wood platforms above the water. Most Saklıkent Canyon tours also include Patara, one of Turkey’s longest beaches at 18 km long. Archaeological excavations still continue in Patara, another ancient Lycian city.

Kaş ranks as a center where nature, sea, history, archaeology, tranquility and endless activity meet. This land of Lycian people, a people too dignified to surrender to the enemy and preferred to commit suicide collectively. The unique and fertile land of the people of ancient Lycia wafts aromas of oregano, cedar and apple trees and bougainvillea that appear everywhere—the streets you walk through accompanied by a visual feast. With so many things to do, you will be unable to get to them all during a short vacation. You leave this piece of paradise promising to “come back next year.” This land of unforgettable beauty will be waiting for you to once again rest your soul.

Where Shall We Go?

– Mavi Bar (Blue Bar) welcomes people of all ages as their meeting place in Kaş Square. At night the crowd gathers, sits across from the bar on the stone pavement and listens to the music while reflecting on the spirit of Kaş.

– Red Point: For those who say “holiday means music and dance,” this is the right address.

– Hide Away: Listen to beautiful music with the bar decorated in cool natural furniture situated in a tasty garden.

– Bilokma Restaurant: Reservations required most nights, so don’t chance getting turned away. A windfall for anyone wanting home-cooked food with reasonable prices.

– Çınarlar Restaurant: From pita to kebabs, fish to fast food, they offer a rich menu with something for everyone. Reasonable prices.

Where Should I Go Swimming?

Çınarlar: At the center of Kaş, where you swim in the sea and dine at the same time. With a view of Meis, the garden terraces will welcome you. Cheap prices.

Kaputaş: Between Kaş and Kalkan with the only sandy beach in Kaş. You climb down 187 steps go down to the beach to get your real exercise.

Limanağzı: You can go from Kaş to Limanağzı in a short 15 minute trip by boat departing from the port. More isolated for privacy with loads of sand. Very attractive.

Üçağız: A little farther away by car, but don’t worry. Hanging over the sea, its famous restaurants serve delicious side dishes. Many people stay the night beckoned by beauty.

Tips: On roads without lights, stop on the side of the road to look skyward. You will not get enough of watching the Milky Way.

Kaş stands as a reference point in history and offers an important privilege. When you go to Kaş, you go to the heart of the ancient Lycian civilization. Track down ancient civilizations through rock-cut tombs, an amphitheater and unique architectural structures.

My Life on Wheels