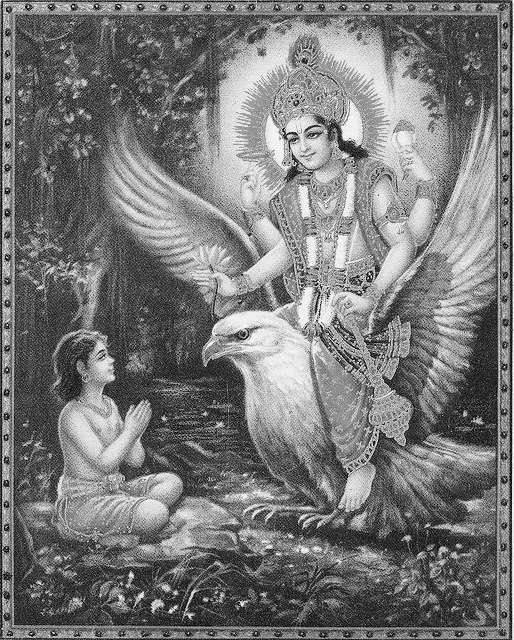 Manu, the considered forefather of humankind, had two sons; one of them was the great king Uttanapada, who ruled in ancient India.
Happily married with two wives, Suniti and Suruchi, each of whom bore him a son, he led a content life. However, Uttanapada loved Suruchi and her son Uttama more then Suniti and her son Dhruva. Suruchi too, disliked Suniti’s son, Dhruva, and would from time to time create disharmony within this ideal family.
It was one such day when Suruchi found that Dhruva was about to sit on his king-father’s lap. She pulled him roughly and said, “Only my son can sit on the king’s lap.”
Overcome by grief, Dhruva went to his mother and narrated the incident. She consoled him and said, “You can always sit on the lap of Vishnu – father and king of all.”
“And where is He?” asked Dhruva innocently.
“Everywhere” replied his mother.
The word Vishnu has a special meaning. It comes from the root Vishlri– the all pervading.
In the great Vedas, Vishnu is “Vishnu-Vishvaterva-Vishvaha“– Vishnu, the One who pervades all creation. The great Vedas declare “Vishluhu-Vyaptam-Yasyasaha” – the one found everywhere is Vishnu.
Five-year-old Dhruva took his mother’s consoling advice to heart. He said to his mother, “I do not wish for that that does not belong to me. Let Uttama have the throne. Through penance I will achieve a far greater position than that of my father.”
He marched right out of the palace and into the forest nearby where great sages and yogis, engaged in the contemplation of ‘Vishnu as the form of the Supreme-Self (Paramatma)’, resided. Upon entering their community, the innocent child asked them where he could find Vishnu. Amused by his innocence, the sages answered, “He is everywhere, meditate on Him and He shall reveal Himself.”
Dhruva sat nearby. After prolonged meditation, he opened his eyes but he saw no Vishnu. Bemused yet touched by the child’s intensity, the sages told him to meditate longer and deeper if he wanted God to appear and imparted unto him the Vishnu Mantra for ultimate realisation.
The word mantra means Mananat-Trayate-Iti-Mantraha – That what liberates the mind. The word Mantra is a conjunction of two words: Manas,mind and Trayate, to liberate. A mantra is given to those keen on transcending worldly existence and anchoring in pure transcendence.
The child took this advice seriously. He sat on a nearby rock surrounded by tall trees, shut his eyes and sat motionless, absorbed on his Atman, the very inner Self. Minutes turned into hours, hours into days, days into weeks and weeks into months. Dhruva continued to sit still, firm like the rock upon which he sat. He opened neither his eyes, nor his mouth. The great yogis were stunned and so was all life in the forest. Animals gathered around him attracted by his immense glow. The spirits of the forest watched in amazement. It seemed like the whole universe, Gods and gods’ creation alike, paused to see the wonder of Dhruva, the yogi.
When a yogi makes firm and resolute strides in his practice, there are bound to be obstacles in along the way but the thing to remember is that Purity is the force, the aim and is the attainment of yoga.
Deep inside his very Self, the Atman, Dhruva reached the Supreme Self, the Paramatman and the Lord of the universe, the all-pervading Vishnuhad no choice but to take form. He appeared before the boy riding on the back of His carrier, the mighty eagle, Garuda.
“What do you want?” asked Vishnu with a voice as sweet as that of the humming birds.
Dhruva opened his eyes, moist with pure bliss and said, “To sit on your lap”, though inside his heart, purified by meditation, he wanted nothing.
Vishnu picked him and placed him on His lap. One established on Vishnu‘s lap can never be moved. He is in the all-pervading Reality, forever.
Dhruva still sits there, as the Polar star in the skies, a permanent guide, not just to the sailors of the seas, but also to yogis sailing deep into theirAtman, to find the Supreme Self of All.
A seemingly unfair family situation did not deter Dhruva to seek the highest Truth.
Every disappointment in this impermanent world is a chance for us to anchor our Atman in the Paramatman, for there is no other alternative but to know Vishnu; when our absorption is total, Vishnu comes to us.
(…Rephrased and Elaborated from the Vishnu Purana)

Paganism: The Lesser-Known First Step of Our Belief System