Home > Soul > So That Year, I Met The Goddess.
Soul 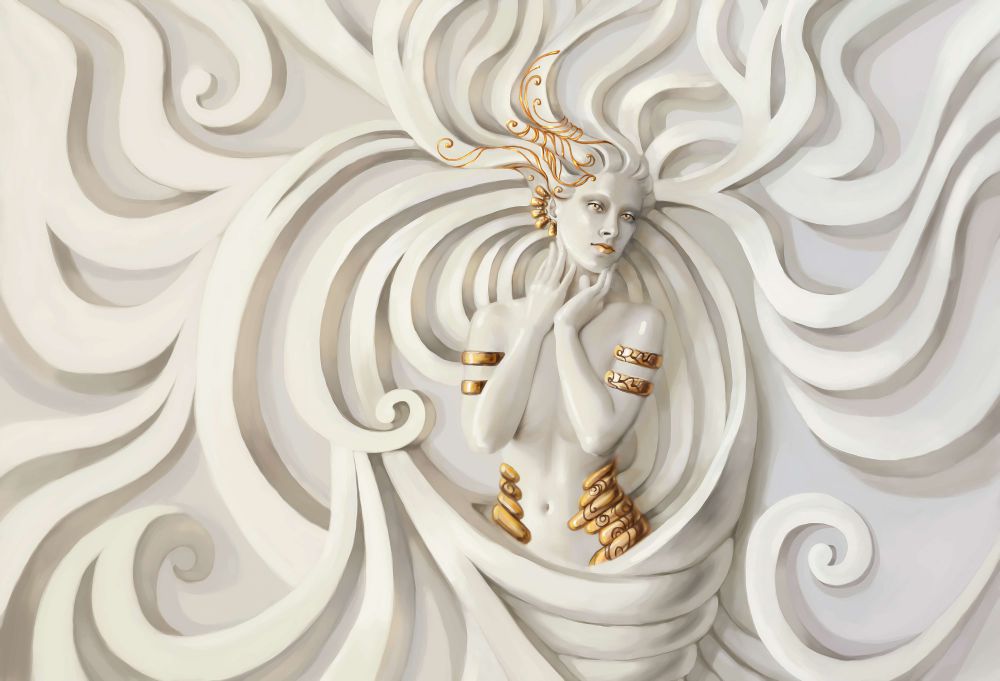 I have lived trying to do justice to the identity and the role of “male” which is given to me by my family and the society, until my 46th year.

p>Nevertheless, I could notice that the “male identity” is originated rather from the body and only the one half of our “human” dimension. On the other hand, life makes us meet the women. Identity conflict begins. One needs to understand and to reach a woman. In the process, one becomes aware of himself. He becomes man.

However I had troubles in getting along with other men. Whenever I witnessed minor and major conflicts I saw how these “half men” writhe in the deadlock. I was afraid to become like them. So I wished for knowing the Human and soon I noticed that peace within and peace among humankind cannot be separated from the male-female sexuality. Then, step by step, I have met the Goddess.

I will try to describe Her to you. Her power and beauty… Even as I write these words, her spirit and power embrace me; not only from the outside but she grasps me at the center of my existence, as well. However, this is not a problem. A male becomes a man, therefore, human only when he is accepted by the Goddess. She is you, she is us.

Previously I have met women who think that they are only females, only mothers, only wives, only sisters etc. They had fates and lives that are repeated across the history and through generations. And their men also were living and reliving the same fate alongside of them. This is a tasteless and fatal situation.

In the life of each man, there are women. Needless to say that life has introduced him a mother, maybe a sister, a neighbor girl, a sweetheart, a wife, a friend and maybe a daughter. Who knows, maybe some of these men have been influenced by a prostitute, a cashier, a glance or a mistress. In short, whether he is aware or not, all of these women are the women of his life. Even if he thinks that he forgot them, he actually carries them somewhere in his soul. He does not even care to think about that many qualities acquired from, came out through or created out of conflicts with women. As the seas chisel rocks, man is formed by women. They are women who are in our lives, exist or do not exist in our imagination. They exist even with their absence.

In my awakening years of 2013 and 2014 I became aware of the things all women in my life gave to me. If you noticed, I did not say “things they took.” Indeed, people does not take anything at all from people. Whatever is yours stay with you. Likewise, women have always gave or I learn to interpret their behavior like this. However, I think I am not mistaken because all women, from the little girl playing with her doll to the grandma telling a fairy tale, are naturally programmed “to give from herself.” This is their foremost spiritual behavior. The one who can nurse give from her milk; and the one without a biological child pours light drop by drop to the soul of the man. For example, our galaxy’s mythological name is “Milky Way”; the drops of the mentioned divine milk are the stars in the sky and here goes the story: One night, Zeus put his son Heracles –born out from a mortal woman- to the breasts of the sleeping Hera. Baby Heracles would drink the milk dripping from the breasts of Hera and could become immortal. However, when Hera wakes up in the middle of the night and sees that she has been nursing a baby she does not know of, she hurls the baby far away and the milk dripping from her empty breast gush out towards the night skies.

If you are a man, woman provides you with the most essential thing –which must meet you so you can live but you don’t possess: the light –just like a baby’s nourishment- to your soul. This is also known as “inspiration.” This power –which can be felt ecstatically and exciting as love- is the secret behind the works and masterpieces of many men. Jung expresses this as an influence which belongs exclusively to woman and calls “Verbus Spermaticus”: “Inseminating word or action.” Woman, underneath her apparent passivity, is the one who lends it to the soul of man and to put him into action by firing his sensations.

I do not think that women know or ponder upon these. They are not given an opportunity to know about themselves and to understand their own worth. In order to see the Woman in her wholeness it is necessary to recognize the different phases and states of the Woman; and this is granted only to a man who asks to life the right questions. As the man matures, the image of woman which is reflected in his soul matures as well. The same is valid for the women. If the degree of maturity is low, he or she goes after a personally suitable image. That is why it is very important for us to meet with valuable and transformative people. In order to see such opportunities and to experience with the purpose of maturing, both parties must be “open-hearted.”

As one becomes informed about “woman” he becomes informed about himself. Some latent codes within you gets activated. Even if one woman, you begin to see her together with her all phases and states. Besides her recent state in this age, as if she is your grown-up daughter, you also think and care about her future, or if you have noticed her faults, you worry about them. In short, you stop sticking to only one phase of her but you understand her more because of these layers and since you understand, you are not in conflict and if the conditions are suitable, you love her.

This love has colors, like the rainbow. As you love your daughter red, you can love your wife yellow and your friend purple. Eventually, in time, you become filled with them and all of these loves unite and elevate you to the uppermost level of the man: the man who can love with all loves, Spiritual Man, actually you become “Human” in the male body and identity. Your wife sees in you a better husband, your daughter sees in you a better father. Other women discovers the surprising aspect of finding a reliable friend in you –which is one of the rarest events in their life. Eventually, conflicts in your soul and surroundings lessen and end; and peace begins to prevail.

I have been a father to a daughter, a husband, a friend and many more. All of these are my identities which are counterparts of a women: Mother, daughter, teacher, student, friend, older sister, maybe a stranger, maybe an actress… but in the total sum of all, I have met the Goddess. She did not stop at saying “Hello” to me; she talked to me with the mouths of all women, loved me with the hearts of all women and embraced me with the arms of all women. Now I am happened to know that I had always lived with the spirit and body of the Goddess even before my birth. I looked for Her in the first half of my current life whereas she always embraced me tight through various images; I had never been without Her.

“The Seven Phases of Woman”

Let the women know this. Each reflects a phase and a state of the Goddess. The total sum of identities, phases and the whole life of her is the “Goddess” herself. I think that when a woman has happy or unhappy phases in her childhood, adolescence, adulthood and crone-hood it is because she forgets that in total she is “Goddess”. The woman travels within the Goddess spirit throughout her life but she seizes upon some deceptive stops as identities. And the men lives on completely unaware of this fact. Because they see the woman only as child, only as wife, only as mother or else male souls do not find what they look for and do not satisfy. And because of this his search does not end and the men can be unable to respect the woman in their lives. Actually, they become deprived of their masculinity. And the woman who reduced herself to a single phase of her life wants to remain there. As she does it she resists the changing of the man she is with –may he be her child, husband or father; directly or indirectly she hinders him. She keeps him in a virtual womb; she does not give birth to him, she does not mature so she does not mature him. And the result for everyone involved is a “miscarriage” – a life unhappily lived “in vain”, a total drama.

Now whenever I am out in the streets, women reflect the Goddess back to me. I look at them with respect and friendship. Even if not at the outside, I smile them at the inside and get back the smile of the Goddess. I hear the whisperings of whimsical daughters, of the spiritual mothers who long for the day of awakening, of the lonely lovers within them. Elegant hands reach out to each other; vocal chords tremble in harmony; eyes warmly trust and even the silence brings peace. Fraternal generosity of the souls soothes the bodies. Nothing need to happen; everything we want happens after all. When the peace of Woman and Man within and without us is realized, forever and ever becomes meaningless. Then we already arrive at the point that needs to be arrived at: our humanness. I only say “I am happy. No beyond.”

I met the Goddess. I recognize her when I see her. While you are busy with your daily chores, she looks at me through your eyes and smiles. You have the right to know this. She is always besides and even within me.

Now I can live on.

What is the New Age?

Letting Sexual Energy Be Bigger than Your Body