Home > Soul > The Human as a Created Being
Soul

The Human as a Created Being 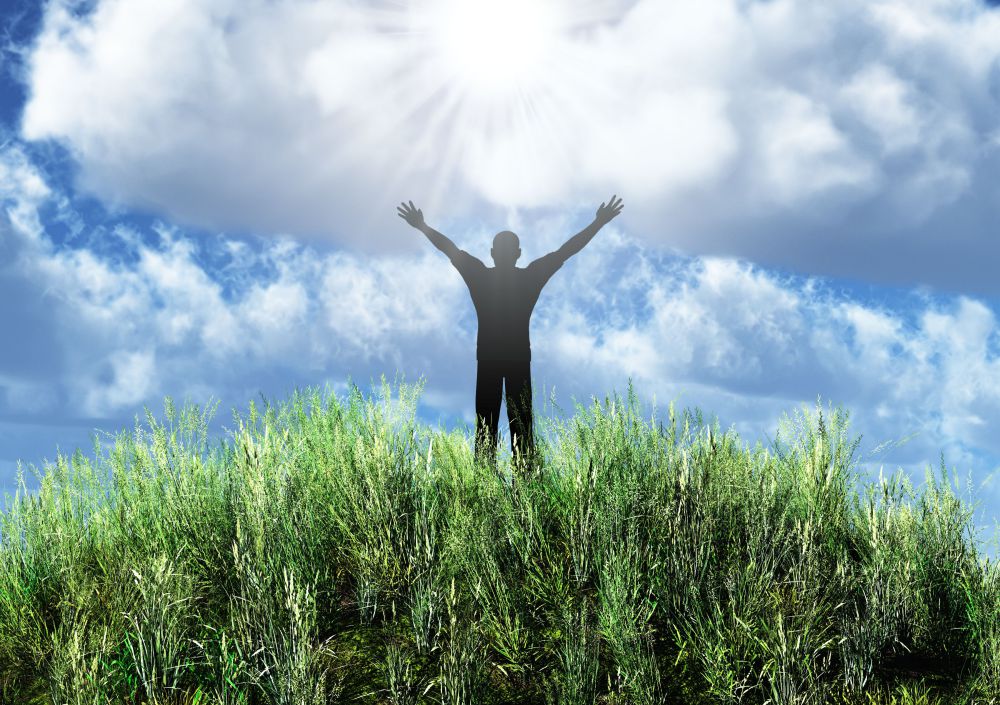 An extremely important fact has been forgotten over the course of humanity’s history. As humanity became influenced by materialism, accepting it as the only way of living, it forgot that humans are exclusively spiritual beings.

Unfortunately, modern humans no longer consciously possess the valuable knowledge that they were created exclusively as human beings. (For example, many people today believe, without question, in Darwin’s theory of evolution, which proposes that humans, over the course of time, had descended and evolved from primates, emerging into the physical world as a result of incidental circumstances.) In today’s world, a mysterious part of this knowledge, its spiritual meaning, is overlooked. Since human beings are biased because of their characteristics, they cannot consciously analyze this issue, so they cannot benefit from the “protective effects” of the deeper meaning of this knowledge. Today, humans struggle with serious problems because they have become excessively associated with the physical world and materialism, and they face more and more hardships every day.

The link between developing an awareness of our existence as created beings and knowing how to solve our problems—such as malignity; egoism; injustice; and excessive passion, lovelessness, compassion, and conscience—might seem a bit vague at first sight. However, every human being who becomes aware of his existence as an exclusively created being can tackle these problems at a different level. They can carry them to a spiritual dimension rather than approaching them superficially and trying to solve them with useless materialistic prescriptions. From this point of view, we could easily say it is essential to have a consciousness that will turn our perspective from materialism toward spirituality and enable us to move closer to real solutions.

However, for people who believe in God’s Existence and his role in creation, it is not enough to express this belief by saying something like, “God created us,” because the content of these words doesn’t mean much. On the other hand, referring to the past as the time of creation makes it difficult to figure out why humans still exist in this world. It may also be misleading for people to believe the process of creation was completed a long time ago. This way of thinking blocks us from understanding the ongoing spiritual evolution of humanity and its connection with the Divine Spiritual World.

Basically, the statement that God created the world within a certain period of time—as stated in the holy books, particularly the Hebrew Bible—is correct. The Hebrew Bible states, “The world was created within six days.” This statement refers to the starting point for the evolution of the world, which is also known as the fourth evolutionary phase when the world and humanity emerged in their solid and visible forms. In fact, the evolution of the cosmic human being will take place over seven main phases, with three of these phases having been already completed. We currently live in the fourth phase, which is called The World Evolution.

According to anthroposophical knowledge, creation dates back to the Old Saturn Phase, which was three phases prior to the world phase. In the light of anthroposophy, we can move toward the world phase by following the three most important pre-phases of creation, starting with the Old Saturn Phase. In this respect, anthroposophical wisdom sheds light on a very important point: The creation of humanity, which is still going through the fourth phase of its evolution, is not over yet. In other words, the creation of humanity is still continuing, and it is currently experiencing a spiritual evolutionary phase.

Believing that humanity has completed its creation is very different to believing in an ongoing creation. Let us highlight this difference very briefly. Those who believe that creation has completed will have difficulty overcoming humanity’s “state of sleep” in its thoughts, emotions, and will during the evolution of the world. They will have to face various outcomes that will force them gradually because, once we hold on to this belief, we also believe that we can no longer evolve because we have already completed our evolution. We might also feel satisfied with our spiritually imperfect state and not deem it necessary to pursue perfection. However, while moving forward with “the aim” set by the Beings of the Spiritual World, human beings should purify themselves from the factors obstructing their improvement and advance their nature toward perfection.

A man who understands that the creation of humanity is an ongoing endeavor can realize how essential it is to know where he stands in the process of cosmic spiritual evolution. He would also like to know what his real position in the world is. After comprehending this knowledge, he can try to understand the main goal and target of his Spiritual Evolution. As the man beings to comprehend these targets, which have been decided by Beings of the Higher Spiritual World, he will also understand his crucial role within evolution and his mission in the world. This is the only way he can consciously make a contribution to the spiritual evolution.

Those who can evaluate their existence from this perspective can easily understand that their personal development and evolutionary targets are connected, and they should proceed in the same direction. In other words, they understand that humans should believe and follow the targets set by the Beings of the Spiritual World. Anthroposophical wisdom expounds this truth in detail, and this truth relates to all of humanity, enabling us to comprehend and internalize it.

On the other hand, people can be easily alienated from the extraordinary reality behind the phenomenon of spiritual genesis by frail thoughts that do not reflect the truth, such as superficially explaining humanity’s existence in our world by saying they evolved from primates. However, this way of thinking disregards the creator. Another weak school of thought assumes that humanity automatically emerged over time because of various physical and chemical reactions within a vague natural phenomenon. People who believe in such shallow thoughts will inevitably have difficulty comprehending that human beings were created specifically as human beings from the start.

According to the theory that proposes that creation occurred suddenly by itself, after some unknown factors triggered it, it is impossible to believe that something, a divine personality particularly, started creation, because a creator is not necessary to such theories.

In this theory, random energies and factors from unknown sources came together coincidentally, and the world of minerals, plants, animals, and humans emerged by themselves. This all happened easily, despite these various elements possessing so many sophisticated details and existing in such a perfect harmony with each other! Let us consider this fact: To solve droughts around the world, humans cannot even create water despite knowing the chemical formula of H2O and possessing the technological resources. The fact that humans lack this capability yet still assume that life emerged as a result of various coincidental factors suggests they are in a state of sleep.

Anthroposophy also indicates the presence of various “powers of darkness” that oppose evolution. These dark powers assert that humanity’s presence does not have any aim or meaning within the cosmos—it is merely a clever, physical, worldly being. These dark powers defend their views by degrading the whole of existence to the physical world and identifying it only with substance. They try to obscure the focus on the Creator’s presence by saying humanity emerged by itself under favorable circumstances without anyone acting behind the scenes.

As people examine the anthroposophical knowledge and realize that the meaning and purpose of human existence originates from the supersensory Spiritual World, they will want to know the spiritual entities in this world beyond, as well as their varying activities and aims. Anthroposophy explains these entities using two different categories, which we can only know and understand by observing their duties within the universe.

These explanations indicate that humanity has come to a junction in its progress. Although humans represent freedom within the cosmic evolution, as long as they deny that a higher creator exists, their view of existence will shape itself around this incorrect premise.

Any assumption that denies there is a godly presence behind creation shows that humans are in a state of sleep, and persisting with such assumptions prolongs this sleep. This state suits the purposes of the dark spiritual entities that stand against the Divine Spiritual Beings.

When the existence of a Godly power behind everything is covered up and cleared away, it is much easier to make people believe in unrealistic opinions and various theories. If we look closer, we can see how these theories and opinions are persistently presented over a wide spectrum.

We can protect ourselves from these dark spiritual entities only by becoming more conscious about their activities. They try to divert us from the spiritual world with their shiny but flawed, empty beliefs and convince us that we are only beings of this physical world. If an awareness, which could be generated through anthroposophical knowledge, is not internalized permanently, we will easily adopt the flawed ideas promoted by these dark entities as our own valued opinions. If this does not change, our souls and personalities will ultimately and inevitably be shaped to suit their purposes.

People who know they were created specifically as humans by the Higher Beings of the Spiritual World understand they were granted freedom by their creators. They know the entities opposing God and spiritual evolution hold selfish wishes and aims for their souls. They also understand their freedom is so wide and comprehensive that it even allows them to choose for the secular. However, for the Higher Beings of the Spiritual World, it is extremely important for humans to have spiritual freedom in this physical world and improve accordingly.

Only people able to find and internalize the true spiritual light of this world can appreciate that their relationships with the Divine Spiritual World cannot be regarded within the context of dominating and being dominated. On the contrary, the meeting point of humanity with the Spiritual World is love. However, any kind of love we find cannot be regarded as real love. For real love, we need to know where real spiritual love springs from and what kind of spiritual characteristics it possesses, because there are different forms of Higher Spiritual Beings behind real love.

As human spirits are neither purified nor perfect, they possess some negative features—such as malignity, immorality, duplicity, and egoism—that prevent them from becoming perfect. However, these human defects cannot be blamed on the Divine Beings who created us. God’s creation was perfect in the beginning, but over time, humanity drifted away from the Spiritual World and became identified with the physical world. An imperfect and degraded nature in the spirits and personalities of humans followed. The unholy spiritual entities also played a great role in this.

The Divine Spiritual Beings undoubtedly accepted the creation of beings with an imperfect and degraded nature, but they never wanted humans to stay in this lower state without the ability to move forward. From this perspective, it is crucial to know that creation is still ongoing. This process continues, and humans did not emerge by coincidence. Therefore, we should remember there is a divine power and Ego behind creation.

Anthroposophy enlightens the mystery of why we were created specifically as humans. It is an essential responsibility for all people to discover the “real meaning” of their existence.

The Magic of Tantra Massage

Paganism: The Lesser-Known First Step of Our Belief System

Letting Go of the Past

What is the New Age?