Anatolia, one of the most ancient places in the world, has been home to many civilizations.

Mesopotamia is one of the most fertile parts of Anatolia, and Mardin lies at the heart of this. Just from this you can imagine how fertile and miraculous it is with its 4,000-year-long story.

This was written on the wall of our hotel in Mardin: “You can compare most cities with another, but never Mardin! As Sirius is the brightest star in the night sky, Mardin is the same among cities.” I really felt this throughout my stay in Mardin. It was like a special star, a brilliant one. I refer not just to the nighttime view of Mardin. It was also brilliant with its people, its culture, its natural surroundings, and its architecture.

Mardin is one of three cities in the world that UNESCO protects, with the other two being Jerusalem and Venice. This is fortunate, because its architectural origins will be preserved. Mardin is like a precious stone that shines with its yellowish buildings in an all-green nature. 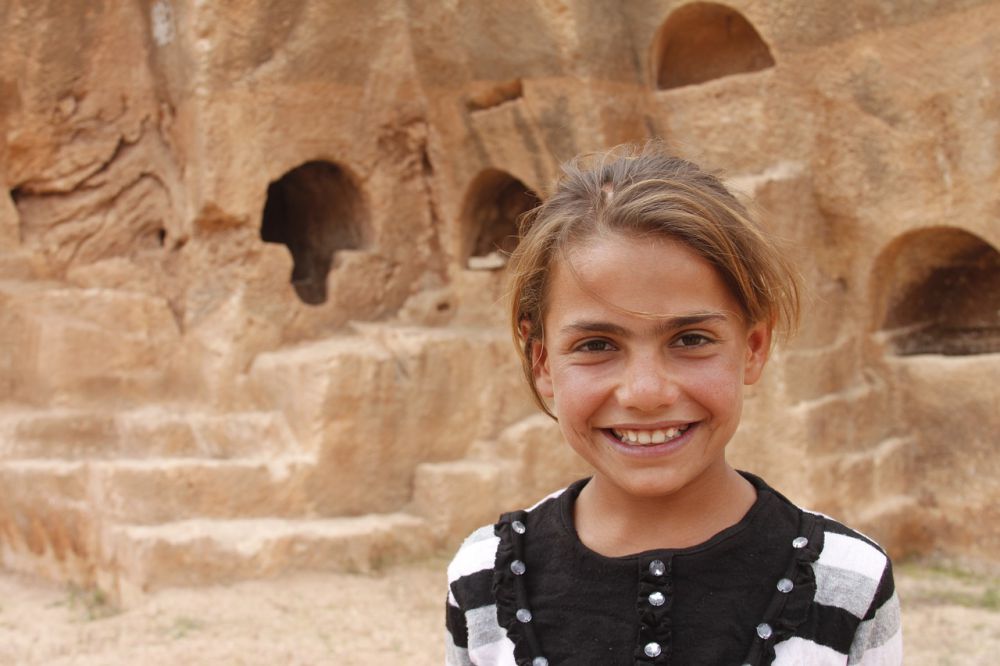 When you visit something so bright, you also start to shine yourself. You feel so good. If you know the smooth and lovely feeling after a good meditation session or similar practice, you’ll know the feeling that the people of Mardin always have. In every place you enter, they welcome you as their guest. If they are eating something, they will invite you to the table. They speak in a language based on love. You can chat with them as if you have known them for years. They do not treat you like tourists. Of course, there are always exceptions, but as we know from nature, the balance is always set this way. In every white, there is at least a speck of black and vice versa.

On the first day, we discovered the streets of Mardin that we knew from a Turkish TV series. You feel like you are in a movie shoot, and you cannot believe that it is real and that people actually live there. On the street, we mostly saw kids. They shouted after us, “We love you a lot.” It is so easy to experience unconditional love there. They would pause their game, shout at us like this, and then continue their game from where they left off. They were not doing it with any expectation. Of course, their parents are probably teaching them how important tourists are for their welfare, but their sincerity comes from their nature and culture. What’s more, unlike in the big cities, children still play in the streets rather than at home with video games. Moreover, they also try to contribute to their families’ incomes. They may approach you at any time and ask if you need a guide. If you accept, they will start to talk about the history of the nearest building. Most of them want to be tourist guides in future.

When you are wandering around Mardin, in addition to the architecture, art is everywhere. It’s on pavements, on shop walls, and on the stairs of the bars. You may see a nice motto or a few lines of a poem anywhere. Moreover, the pleasant aroma of Syriac cookies adds to the visual beauty of the streets. Mardin touches all the bodily senses in a very nice way. 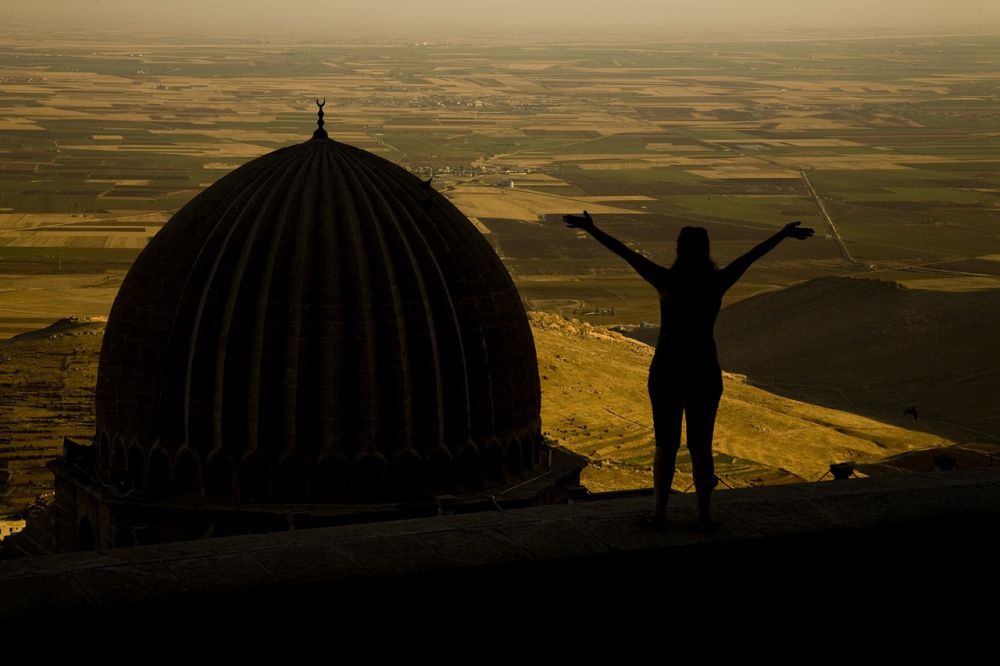 Next, we visited the center of old Mardin and the Zinciriye Medresesi, the Olgunlaşma Institute, the Ulu Mosque, the Museum of Mardin, and the Church of Kırklar. The symbolism on the minaret, one of the most beautiful that I have seen, of the Ulu Mosque is in itself a subject for another article. In the courtyard of this mosque, there is symbolism for the life cycle that we would also see in many other places. From a distance, it looks like a fountain. It starts with water dropping from the uterus, and then there is the period of childhood before the stream gets narrower as time passes and ends up in a big pool that symbolizes infinity. At the point where it reunites with the pool, it represents the death of the person.

It is a little difficult to climb up the Zinciriye Medresesi, but it is definitely worth it to see the spectacular view of Mesopotamia. We ended our first day with a Reyhani night. The only problem I experienced in Mardin was people could smoke everywhere. Their cuisine is also based mostly on meat, so you may have a problem if you are a vegetarian.

On the second day, we went to Midyat, which is home to most of the mansions that we see in Turkish TV series, but I did not like Midyat as much as I did Mardin. Maybe it was because it was the weekend and it was busy, and there was some television shooting going on as well. We could not wander around comfortably or discover a lot. The bazaar of Midyat was still colorful, however, with its “telkari” Syriac evel eye beads and wine tastings. Our second day was our best day of the visit in the end, as we saw a Syriac village, the Monastery of Mor Gabriel, and Dara. 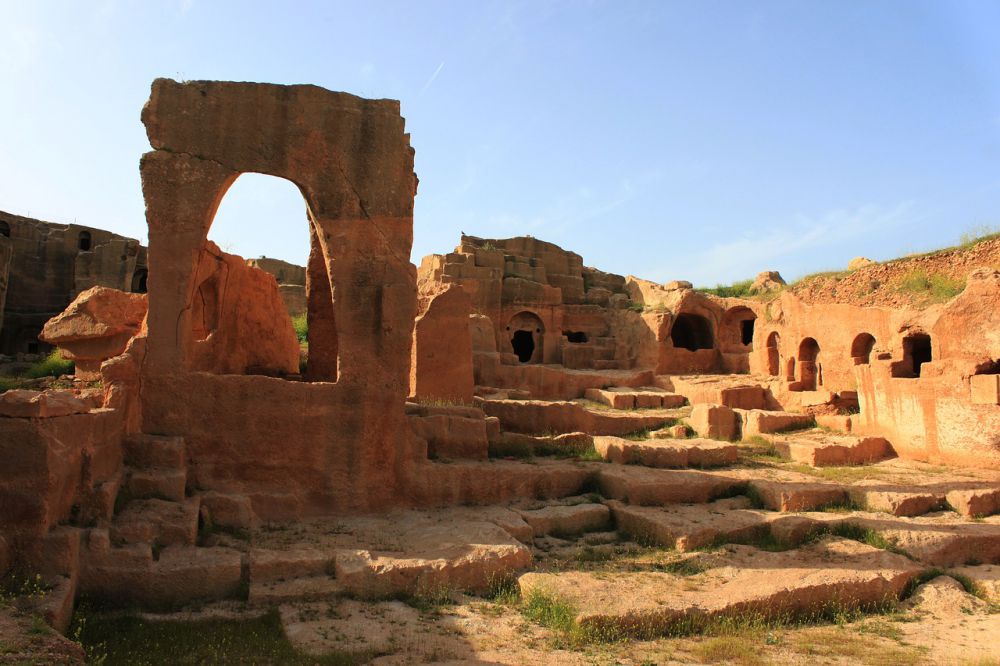 Dara is the Ephesus of the east and lies about 20 miles southeast of Mardin. It dates from approximately the fourth or fifth century. When you visit Mardin, if a building is a few hundred years old, it is considered new, because most of the structures are at least a thousand years old. Dara, meanwhile, consists of caves carved into rock, and it is very impressive. If you go to Dara, visit the sun temple especially, because it has a very nice energy.

The Monastery of Mor Gabriel is also a very special place for Syriacs. This monastery is not as hospitable as other places in Mardin, but it felt very natural for me because I had just returned from a monastery in Bali. It was strange for me to see tourists trying to take pictures of both the monastery and us while we meditated. Due to its fame, Mor Gabriel attracts many tourists each year, so they organize a tour where their own guides, who are not particularly friendly, show tourists around a small part of the monastery. When Syriac priests die, they are entombed in a sitting position looking east, so their tombs are quite high. In one of these rooms, there was some sand in front of one of the tombs, and this is believed to be holy. Of course, I took some of it. 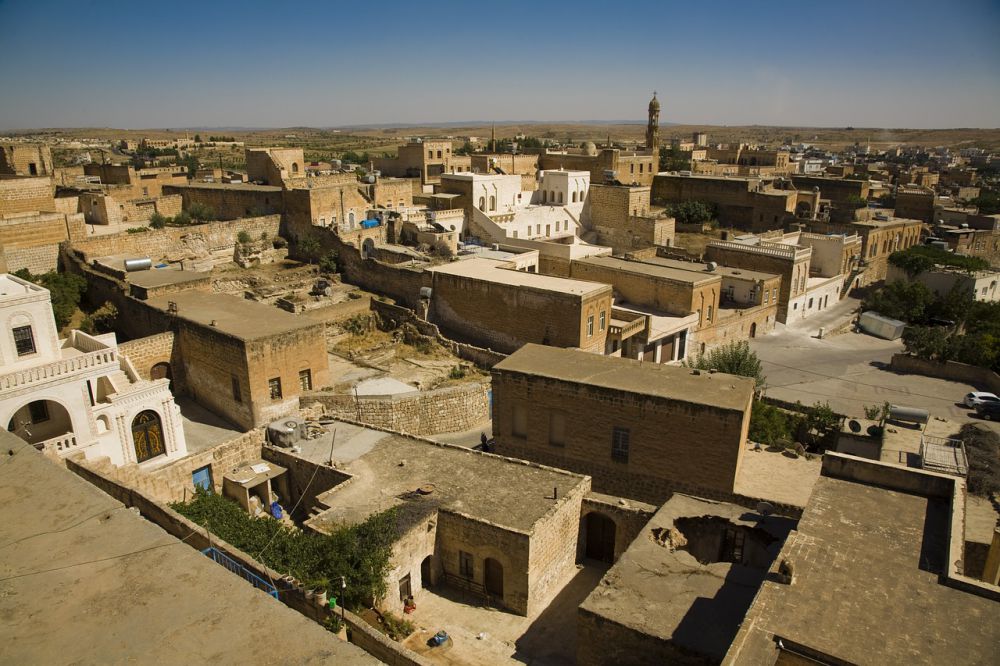 Next, we went to the Syriac village of Dogancay. It was one of two Syriac villages we visited, with the other being Killit (Dereiçi). Both have very few houses. The story of Killit is especially interesting. Killit has catholic, protestant, and orthodox churches together within it. The oldest one is 1,700 years old, and the newest one is 150 years old.  In the 1940s, a mosque was also added. For hundreds of years, the inhabitants of this village have lived in peace without any discord between religions or ethnicity. All the children went to the same school with a single room. There were approximately 300 households, but in the 1960s, migration to Germany started, and by the 1990s, it was almost empty. The local leader, Bünyamin Cercis, decided to open a wine factory with modern machines that would provide new job opportunities for the remaining households. A few days before the opening, though, he was killed in a night raid by terrorists. After this, the remaining households also migrated, including his family. These ancient lands are symbolic of friendship and brotherhood between religions, and the fertile vineyards host only a few households nowadays. It seems like the village is longing for the people who migrated.

We went to Killit on our last day, and its story impressed me a lot. Another story that impressed me was the story of Uncle Bahe, who lived in the Deyrul-Zafaran Monastery.  You can also visit this monastery, albeit only partly and accompanied by their special guide. This monastery is very special as well, because it was the center of the World Syriac Patriarchate for 630 years. However, the story of Uncle Bahe, who lived there for almost all his life and only died a few years ago, is also very touching. Uncle Bahe was a person who became the symbol of Deyrul-Zafaran, and they even made a documentary about him. In brief, his story goes like this: According to some, when he was six, his mother left him at the monastery because he was mentally handicapped and she was having financial problems with two other children to support. She believed she could not afford to look after Bahe, and the monastery would be able to better care for him. As she left him, she said, “Wait for me here. I will come back to take you home.” She never showed up again, so Bahe spent all his life waiting for his mother to return. Thinking she might arrive any moment, he never left the monastery. The only thing he remembers is that he wore red socks when his mother left him. Those who knew his story brought him red socks as a present. He got excited whenever he saw a woman that resembled his mother. Over the years, he became the symbol of the monastery. Although they spoke Aramaic, the language that Jesus Christ spoke, at the monastery, he never learned it and spoke only his mother tongue Arabic. Right until he died in March 2014, he waited for his mother. Although he never saw his mother again, a Turkish film crew found his sister in Syria. When they told this to Bahe, he did not speak for a long time. According to what the people at the monastery said, he was rather disappointed with his mother for not keeping her promise.  Many Muslims, Christians, Armenians, and Syriacs attended his funeral. Circis Kaplan, better known as Uncle Bahe, was a symbol of both Deyrul-Zafaran and brotherhood between religions.

Uncle Bahe and the love and respect he received is just an example. There are many more stories to be discovered in Mardin. It is not easy to be a star. Mardin is a city in the middle of the fertile lands of Mesopotamia with wise and loving people. It is waiting to be an instrument to help you find your own story and your own wisdom. Are you ready for this?

Has Your Suffering Ended?

What’s This Regression Therapy Thing That Can Radically Change Your Life?