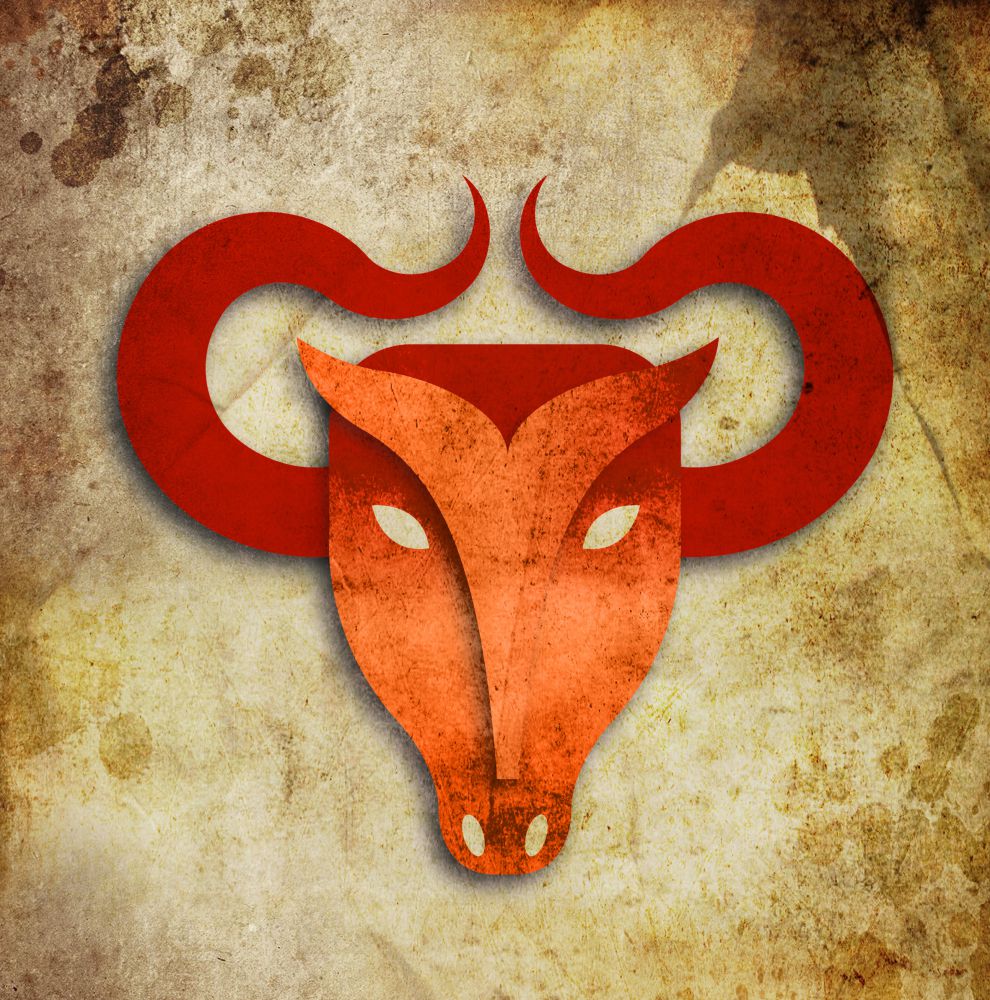 Taureans, who are born between April 21 and May 20 under the influence of Venus, usually succeed in every possible course of life they decide to follow, for they steadily step forward in search of beauty, comfort, tranquility, and security.

They’re able to score phenomenal victories by tracking a secure and familiar path with great patience and persistence. Global history bears the indelible imprints of the famed Taureans, from Karl Marx to Freud and from Shakespeare to Suleiman the Magnificent.

This quote of Sigmund Freud, the founding father of modern psychiatry, characterizes Taurus pretty well: “A woman should soften her man, not weaken him.” The statement explains what a typical Taurean seeks in love: tactility. On the other hand, weakness is never in the vocabulary of Taurus, because this earth sign doesn’t want to weaken the soil but rather soften it and increase its fertility.

In addition to tactility, Taureans also enjoy femininity, endearment, and tranquility. After all, they’re ruled by Venus, which is associated with eternal femininity, beauty, pleasure, and love. Venus seeks and offers clarity, steadiness, sensual pleasure, and peace.

Following the rambunctious Aries, Taurus manifests itself as bringing stability and soundness to life. It embodies beauty, steadiness, persistence, and conventionalism. It’s enamored with beauty, cherishes grandeur, and enjoys the best people, nature, belongings, arts, poetry, and food—pretty much everything. The Taurean ways are gentle, and they prefer familiar manners over the innovative. At the end of the day, though, they manage to accomplish their objectives with concrete patience. They like the soil and the yields from it, and they wait to see which way the cat will jump. Taureans intensely embrace what they decide to call their own because they’re rather possessive by nature and dislike letting go. This situation tends to invoke jealousy and an excessive amount of attachment.

Taureans focus on all the five physical senses and savor them deeply. Their sixth sense is notably weak because they prefer to pass this on to their opposite sibling, Scorpio. That said, it’s still possible for Taureans to enhance their extrasensory perception. As it happens, William Lilly, the founding father of classical astrology, was a Taurean, as was the existentialist philosopher Kieerkegaard.

Taureans make good financiers, bankers, builders, architects, musicians, actors, and artists. Financial security and money are major fields of interest for Taureans. This was demonstrated by Karl Marx when he pondered the link between production and capital before proceeding to theorize the idea of socialism. Likewise, Lenin, the architect of the Russian Revolution, was a Taurus. Some Taureans might be considerably stubborn and insist that it’s “my way or the highway,” and these people may tend toward dictatorship. Curiously enough, Hitler and Saddam Hussein were both born toward the end of April.  Some remarkable political figures such as Queen Elizabeth, the memorable Eva Peron of Argentina, and former UK prime minister Tony Blair were all born under Taurus. Certain astrologers argue that Mustafa Kemal Atatürkof Turkey was a Taurean as well.

If you recall how Suleiman the Magnificent managed to enlarge the Ottoman Empire to its largest size in its history, it shouldn’t surprise you to learn that he also was a Taurean, especially considering the connection between  Taurus and the earth element.

I guess also incorporating personalities such as Shakespeare, Dante, Balzac, and Salvador Dali could balance Taurus out nicely.

Taurus is fond of beauty, and it is beautiful itself. It shines with the charm and grace bestowed upon it by Venus. Think about Michelle Pfeiffer, Uma Thurman, Penelope Cruz, Megan Fox, Audrey Hepburn —do I need to continue? The appeal of Taurean men is also legendary, such as that of Al Pacino (possibly the most charismatic man of our time), Daniel Day Lewis, Robert Pattinson, Jack Nicholson, and Mehmet Günsür.

The decisions of Taureans are usually carved in stone. They stand by what they say, sit tight on their decisions, and want to go their own way at all costs.

Even though Taureans have a reputation for being lazy and not very active, they can make good soccer players, particularly goal keepers, such as Iker Casillas of Real Madrid; Turgay Şeren, who is also known as the Panther of Berlin; and Rüştü Reçber. Others, such as Andre Agassi and David Beckham, are monuments of stability. David Beckham is a typical example of a Taurean male, because in addition to his soccer abilities, he has a physical appearance and sense of fashion that appeals to both men and women.

Turkey likes Taurus, because the sign complements the Scorpio-ruled country, and the Turkish people usually admire Taureans in the public eye, such as Cem Yılmaz and the ever-popular young actor Ayhan Işık.

Taureans usually have hollow legs when it comes to eating and drinking. They involve themselves in all kinds of earthly pleasures and like to have beautiful, artistic possessions. They are typically interested in horticulture, carpentry, architecture, and cuisine. They may occasionally display romantic outbursts when in the presence of beauty, but they always avoid emotional ups and downs.

You can easily make yourself at home in a Taurean’s house. You feel comfortable enough to eat and drink as you please, enjoy lengthy conversations, and even sleep over there, although you may feel sluggish because Taurean homes circulate a certain tranquility and laziness.

Comfort is essential for Taureans because they enjoy pleasurable and fluffy objects so much. Being fond of beauty and the best of everything—whether it be an artistic work, a beautiful song, or even a remarkable cup of coffee—is a thoroughly Taurean attribute.

Taureans don’t really have a particular desire to place too fine a point on anything, but their steady and persistent attitudes can verge on obstinacy, because steadiness and gumption are two definite characteristics of their sign. It’s as if the proverb “better late than never” was made up by a Taurean.

The second house of the Zodiac symbolizes a person’s resources and possessions, and this is ruled by Taurus, so many Taurean’s are very attached to their possessions. They are reluctant to give up these possessions, and they prefer to have an abundance of money and surplus income just so they can feel secure. Owning land and property soothes them immensely.

They yearn for steady relationships, comfort, abundance, and a joyful domestic life, usually managing to acquire these things over time. They are fond of their partners, doing their upmost to please them, and have a tendency to build long-lasting relationships.

Taureans tend to demonstrate tortoise-like features as opposed to the burning haste of Aries. They resolutely work toward their goals, rarely abandon their plans, and never give in to any kind of ultimatum. If someone were to give them an ultimatum, they certainly wouldn’t care. Taureans are people of long-term projects. They are usually calm by nature and dislike getting into arguments with other people. Many of them could be considered decent candidates for becoming Zen masters. The earth element grants them the ability to balance their surroundings, and their stability is not easily shaken. They love nature and enjoy being in the mountains, forests, and any kind of greenery. Climbing and hiking are their favorite ways of relaxing, although they also profoundly enjoy artistic and musical events, such as concerts or operas. The strength of Taurus lays in its steadiness, loyalty, and resolution.

Roots are of great importance to Taureans, and a sense of safety is paramount for them. They are usually easy going and rarely become angry, but when they do for some reason, it is wise to display the white flag of surrender against their wrath. The wrath of a raging bull is unlike any other, and it is very difficult to recover from a drastic butt of their horns. They are nearly impossible to handle when furious.

Their possessive nature can sometimes make them jealous. Loyalty is extremely significant in their lives, and they generously give this loyalty to their loved ones. Honesty, integrity, and loyalty are the prominent features of Taureans. They build their relationships rather slowly, but those relationships usually last a lifetime.

Taureans don’t like to take chances, so they carefully weigh their decisions using a slow and methodical approach. Impulsive people may find them a little boring because of this. However, no one can ever change a Taurean’s mind once they decide what they want to do. They prefer what’s known to them rather than the new and unknown.

Musical talent is often seen in Taureans, and such people usually have beautiful singing voices, like Barbara Streisand and Cher.

There is a risk they can end up with a dogmatic approach to life because of their old-fashioned and obstinate nature. At times, they will suppress their urges for the sake of security.

Taurus rules the throat and neck area, and people born under it can be vulnerable to throat infections, asthma, respiratory disorders, illnesses related to the uterus, and kidney, genital, and liver disorders, as well as rheumatic diseases. Because they don’t really like to move around, they can be prone to putting on weight, and constant eating is a Taurean characteristic as well. Taureans tend to follow leaders who they wholeheartedly believe in, who like peace, who are law abiding by nature, who intensely detest debts, who care about property, and who embrace the status quo.

Taureans have shrewd minds, even though they are rarely very intellectual. They generally prefer to make friends within their own social environments. A life of luxury would certainly be enjoyable for them.

All for One and One for All: The Trinity of Astronomy, Astrology, and Mythology

Juno - A Humble Sky-Observer, 8 months ago