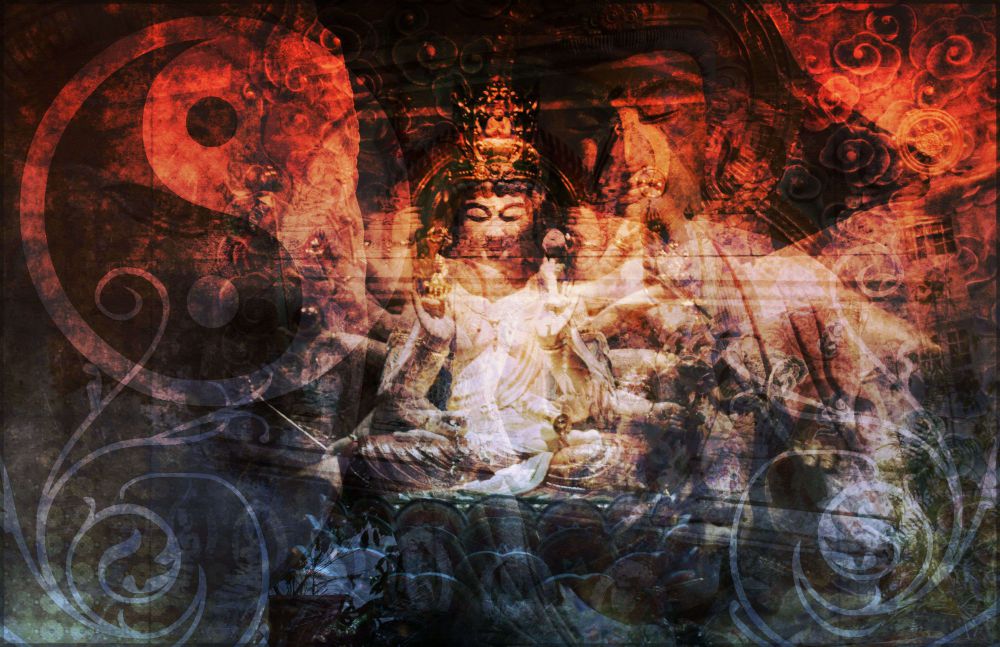 Consciousness is You, the Self. It is unlimited because the conscious world is unlimited, unlimited and eternal. It belongs to the eternal flow of an all-pervading reality that will exist when all is gone. It is the abode, a challis of the ephemeral world experienced by our senses and mind.

Is this world real?

A veil of darkness covers the spiritual Self (Atman) that brings duality to our perception: “God is there and I am here. This is real and I am here to enjoy it. I will ask God to provide me with things I need, crave”.

God is not there.

Moreover, heavenly bliss is not only attained after the death of this body.

God is Light and the Self is the heat emitted by this Light. Without Light, heat cannot exist. Heat is not Light, yet the two are eternally inseparable. If they were one, there will not be the need for dualities in this world, if they were two, they would cease to be eternal even in eternity.

God (Ishvara) first manifests and transpires inside us, then takes shape in various forms in the conscious and unconscious world, always reflecting our consciousness. Therefore, we erect temples to find a home for Him or Her. We worship Him or Her in myriad forms to purify our minds. The senses, mind and intellect we posses require an outlet in the forms of mental, sensual and intellectual interactions. The form of the God we worship is not a mere idol but rather is the manifestation of the deity Himself or Herself. The deity is alive an idol is not. There can be natural manifestations in varieties of shapes and forms obvious to all.

Then there are the personal manifestations arising from a myriad of moods known to human nature. Naturally, the goal is for the ultimate expression of these emotions echoed in their purity – Divine Love, Divine Grace, Divine Anger and so on. The concomitant sum of consciousness, call it Super Consciousness, does from time to time manifest in powerful individuals, divine births, created by nature as a medium.

Deities of clay, wood, metal or stone may appear “idol-like”, eternal reality may not be so. Eternal reality is the sound that is all-pervading ensconced in every cell of our body, in every thought of our mind and in every atom of creation. Sound is the maker of creation, the father of form. Energy derived from the eternal, all-pervading sound and its cosmic subsidiaries is the basis of the form of any Deity. The eternal provides the substratum and nature provides the senses and emotions making the deity alive and responsive to the human understanding.

Deity worship is essential to one traversing the path of yoga. The chosen deity, Ishvara, is worshipped in the form of the five elements viz. earth, water, fire, air and ether.

Earth manifests as the physical form of the deity. Water is the purifying agent and the source of all life. Fire is in the vision, the light in a world of darkness, which shines on the path travelled by yogis; igniting the inner fire is the paramount act of yoga.

Air is the vital air, the Pranas, which govern all functions and are a testimony to life being present. Prana–pratishta, a ‘life inducing’ ceremony is done to invoke the Lord into the physical form.

By practicing yoga, the yogi connects with his Ishta Devatha (favorite deity) via the elements. Seeing his Lord everywhere, seeing everything in Him or Her and attributing all deeds to Him or Her, equanimity dawns upon the yogi.

Most religious people invoke the vision of God being present everywhere. However, the actual realization of the Supreme Being everywhere is a daunting task. It requires the most sought after religious attainment – purity. Purity is a force, there is nothing like it. It is a mirror to the world and placid lake to the self. Purity is attained by right conduct, right practice and by detachment.

Purity draws the all-pervading, ever-expanding Brahman (God) to manifest despite the seeming duality of nature. Such darshan (vision) is rare and profound.

Purity neither runs away from bad nor runs after the good. Purity dwells in itself.

When all is one, there is nowhere else to go but in.

The Atman (Self) dwells in the city of nine gates (two nostrils, two ears, two eyes, one mouth, an anus and genitals), ever in disarray, identifying itself with and entrapped in the body and its extensions. This city also possesses a mind that is the product of heat, food and the senses. A soul that identifies with this is tossed on the waves of Karma, confused of its nature and Dharma (duty). Through this, the Atman remains pure, untouched by these “possessions” and their repercussions.

How could the pure Self ever become entrapped?

An ancient error, a dream that never was, the sweetness of which is so strong, that it caused a persistent drunken state of illusion.

An eternal question that leads to the awakening of the seeker…

Those whose intentions are pure, who seek final solitude, who are fearlessly cutting the dream and most of all, desirous to awaken may traverse the path of yoga (union). Such an Atman (soul) is starved for yoga with the Paramatman (Supreme soul), the Super soul of all. The soul can never be conscious and complete if it does not yoke itself to the all-pervading Supreme soul. They have to become one, like Light and heat, burning bright in all their glory.

O’ Woman of Mine

Come On! Open Your Arms to Love!

The Religion of the Universe