Home > Story > By the Ocean…
Story 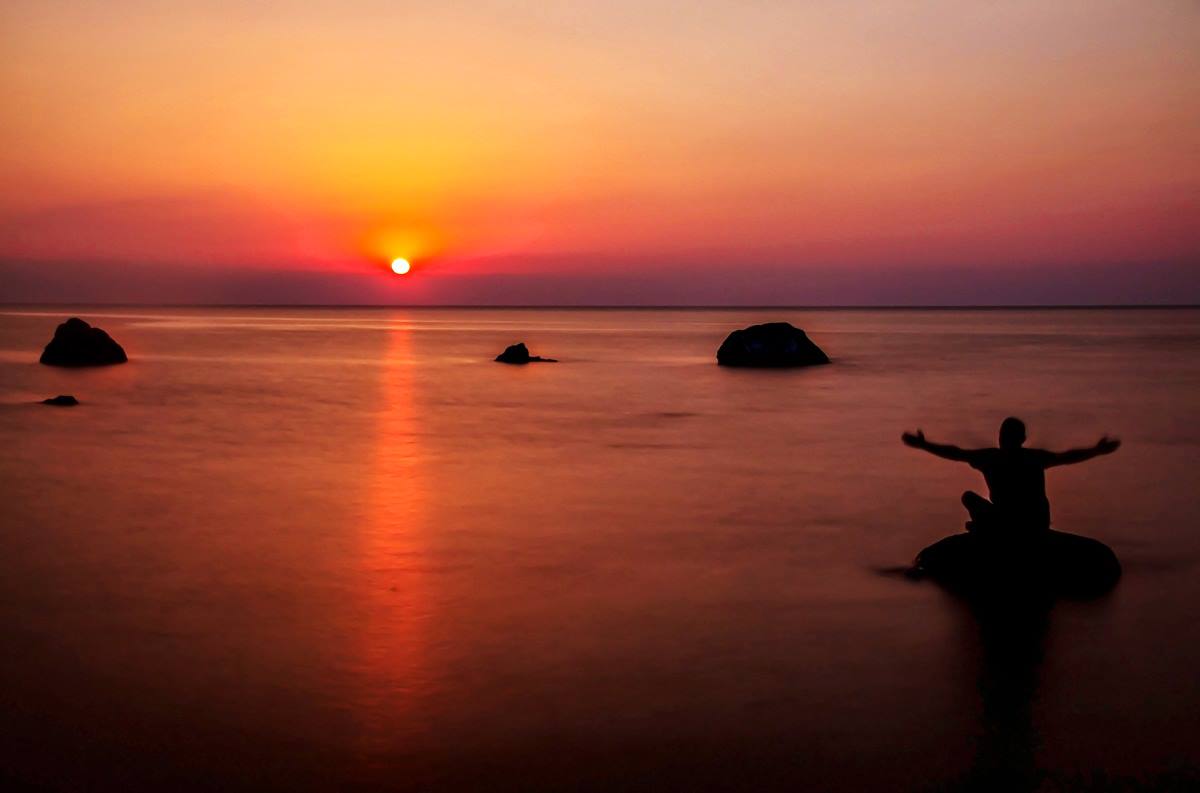 I sit down by the ocean and retreat deep into thought. What’s life? What’s death? What’s spiritual growth?

The already known answers come back, the same routines as always, but I still can’t figure it out. I wonder what it would be like to know the answer to everything, so I could just lay back and bask in the sun. The sky is a deep blue, and the weather is fabulous. I abandon myself to the sound of the sea, the warmth of the sand, and the light of the sun, which suddenly vanishes. I immediately open my eyes to see what has happened, and a man is standing over me, blocking my sun. I sit up in response.

The man then says, “Don’t be afraid. I came to answer your questions.” I can’t really describe him, because I somehow see him however I want to see him. He could be an old, wise man, a smart-looking boy, a spiritual teacher, and so on. What really matters is that he is here, talking to me…

He picks up some sand from the beach, and suddenly this sand turns into a glass. “This is your body,” he says as he plunges the glass into the ocean and then looks at the sun through the now-filled glass, “We filled your soul, and now you just need a name.” He takes out a marker pen from his pocket and writes “Hasan” on the glass.

“Now the process is complete. Take it! That’s you,” he says as I look at him in wonderment. “Close your eyes for a few seconds then open them again,” he continues. I duly shut my eyes and open them again. The whole beach is now filled with glasses, every one filled with water from the ocean. I can read various names on them: Seda, Gökhan, Ebru, İdil, İlyas, Tansu, Jack, Jill, Thomas, Markus, Ana, Nadine, Joan… The glasses seem to continue forever, an endless number of names. I try to comprehend what I’m seeing.

The man explains, “This is a summary of your worldly existence. The ocean is your soul, and the beach is your world. Each one of you comes from the same ocean but sits in a different glass, so you all believe you are separate.”

He then wipes off the name on the glass with his finger and adds, “Some would teach us to erase our individuality, as if individuality is just the name on the glass. Sure, it’s easy to wipe your name off the glass, but you’re still in the glass. You have no identity now, but you’re still separated from the ocean. You don’t realize you’re part of the ocean, and you don’t know who you are in the world, so you shouldn’t try to erase your identity.”

Next, he writes my name on the glass again and empties its water into the ocean. He explains, “This is what happens when you die. You mix with the ocean of spirit.  Death is the transition from being a separated part of the endless ocean to returning and mixing with the ocean itself…”

The glass then turns bank into sand, which falls over the beach. “Everything returns to where it started, but there’s another possibility…” he says as he motions his finger backwards. Suddenly we find ourselves a few moments back in time. The glass is back in his hand, full of water, with “Hasan” written on it. He throws the whole glass into the ocean and says, “There, Hasan has found his real self, even though he still lives. He died before will he really die.”

I almost reject him, thinking that the glass is not in this world anymore. He smiles and says, “You might think so…” The waves then bring the glass back to the beach, and it’s still full.

“See, Hasan can be in both worlds. He knows who he is, both in this world and the other. Now, come with me,” he says. I suddenly find myself floating high in the sky. There is a seemingly endless ocean below and the island where I was laying. As I look down, there is no distinction between them. The island is a beautiful piece of land in the ocean.

The man explains, “An endless ocean with a tiny island in it. If you look further, you’ll see countless islands and archipelagos. They are different worlds, galaxies, and universes, but they’re all within the same ocean. When you look down from here, do you see any difference between your world and any other?”

I see no difference at all but rather just a flawless integration. “The island is as real as the ocean, because it was born from the ocean. Returning to the ocean is not the only purpose in life. You should realize that the sand your body is made from is given by the island, which is also part of the ocean. You should enjoy every phase of life, spending some time in the ocean and some time on the island. What you see before you is existence, so come on—just enjoy the view a little more…”

I suddenly wake up. It seems I fell asleep under the sun. There’s nobody around anywhere. I’m about to say, “Wow, what a weird dream,” when a glass next to me catches my eye. It has “Hasan” written on it, and it rests on a small note. I read the note, which says, “Don’t worry. It’s not from the ocean but from the freshwater spring above. Maybe you’re thirsty, so enjoy it!”

From Darkness to Light...

When Night Turns into Day...

The Eye of Horus: Yet another Tale of Regression Therapy